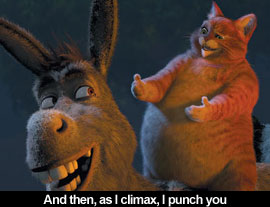 by Ian Pugh Because Shrek the Third tied things up pretty conclusively, what they're probably going to tell you is that Shrek Forever After (hereafter Shrek 4) is more of an epilogue than a sequel. What they won't tell you is that this "epilogue," co-written by the screenwriter of Date Night, is more of a toy than a feature film. But your money's just as green as it ever was. Now settled into a monotonous family life, Shrek (voice of Mike Myers) strikes a deal with Rumpelstiltskin (Walt Dohrn) for the chance to live one more day as a bachelor/terrifying ogre. Unfortunately, said deal transports Shrek into an alternate reality in which he never rescued Fiona (Cameron Diaz) from the dragon's lair, freeing Rumpelstiltskin to conquer the kingdom of Far Far Away. And despite much talk of being grateful for what you have, that's all there is to it, really. Sure, it's better than Shrek the Third, but lots of things are better than Shrek the Third--and even then, Shrek 4 is only an improvement in the sense that it isn't obsessed with scatological humour...and that it doesn't leave an especially terrible aftertaste. It doesn't leave the slightest impression at all, in fact. It's not merely a product, it wants you to see it as a product: It's a Wonderful Life as told by Mr. Potter. Oh, and it's in 3-D. I mean, of course it is.

Following that line of thought, it should come as no surprise that this latest offering is the least dynamic entry in a series noted for its cluttered action sequences. "Minimalist" and "reserved" are hardly the right words to describe it ("spartan" might be more appropriate); the point is that, visually, there's not much going on in the world of Shrek 4. Throwing things at the screen often enough to wake you up and remind you why you're wearing the damned glasses in the first place, it certainly doesn't go out of its way to warrant its 3-D presentation. (The film only tries to wow you when Shrek is thrown between his world and the parallel one--and those sequences would probably have looked equally impressive in 2-D.) I'd say it reeks of desperation, but desperation implies effort. Remember that nine years have passed since the first Shrek; back then, the filmmakers pretended to have something to offer the adults in the audience. Nine years--that's long enough for most people (yours truly included) to regret their adulation of the original and, most importantly, long enough for a new generation of tykes to have grown up in a post-Shrek world. It doesn't matter whether those tykes have actually seen the last three films, because they only need to recognize Shrek as a brand name or an icon. There's no effort necessary.

Consider, too, that Shrek 4 all but drops the long-standing premise of fractured fairytales. Rumpelstiltskin and the Pied Piper provide a few knowing laughs, and there's a bit of ironic pandering to older viewers (ever-so-relevant references to Troll dolls, Lionel Ritchie, and the like), but for the most part the movie follows DreamWorks Animation's standard formula: vaguely familiar characters wandering aimlessly through a barren landscape. (Donkey (Eddie Murphy) and a fat Puss-in-Boots (Antonia Banderas) also show up in the mirror universe, where they're given absolutely nothing to do. At least Murphy doesn't have as much dialogue this time around.) You could call Shrek 4 the rough equivalent of those Brazilian Pixar knock-offs that haunt the bargain bins at Wal-Mart--a mindless distraction aimed at clueless parents, who then subject it to undiscerning children. Fitting that this film should be released a few days after George Lucas "jokes" about the Star Wars saga, fooling everyone into believing it had been planned years in advance. You can argue that the brain trust behind these cash cows are "laughing all the way to the bank," but bear in mind that they're probably not laughing with you. Just tell your kids to sit, watch, and wait for the Puss-in-Boots spin-off movie--coming next summer. Originally published: May 21, 2010.