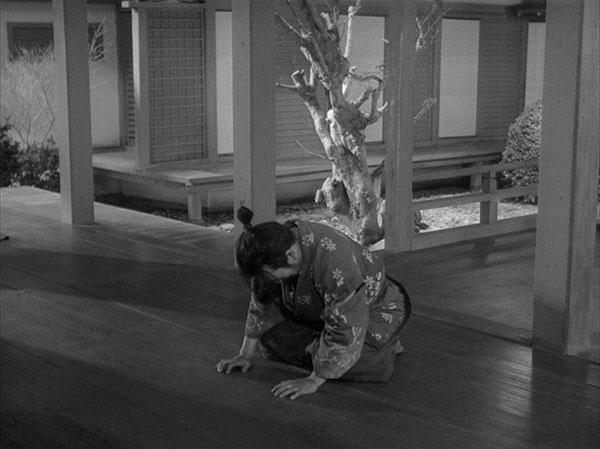 by Walter Chaw A little late to the party, I know, but Kenji Mizoguchi's magisterial jidaigeki Sansho the Bailiff is the source material for Hiyao Miyazaki's Spirited Away. Both are initiated by the filmmakers as fairytales, mythologies; and both are initiated within the text by a specific fatal flaw in parental figures. In Sansho, it's hubris when the father, a principled public servant, stands up under an unjust edict and is exiled, leaving his family in peril. In Spirited Away, the parents engage in an endless banquet, indulging their gluttony until they're transformed into literal swine despite the protests of their child. Both films are withering indictments of the cultures that produced them, and each is opened to a greater depth of interpretation by an appreciation of the other. Coming here from the Miyazaki, it's fruitful to consider why it is the Mizoguchi is named after the villain, the cruel slave-owner who tortures the film's heroes, while the Miyazaki is named for the innocents (Sen to Chihiro no Kamikakushi) and the loaded act/word "Kamikakushi," which once referred to abduction by angry gods but has a contemporary implication of sex trafficking. Arguably, Mizoguchi sets up this read of the later text in his own canon, with many of his films addressing the problem of sexual exploitation among the lower class in Japanese history--a problem that persisted through the war years and, some would say, beyond. With its naming, it's possible to infer that the source for the ills in Sansho the Bailiff is too strong a hold on the traditions of an antiquated past; in Spirited Away, it's the frittering away of the future by a generation too solipsistic, too blinkered by its own sense of entitlement, to save itself from obsolescence. See the two films as bookends of a particularly Japanese introspection, equal parts humility and nihilism. (As one of the characters in Sansho the Bailiff sings, "Isn't life a torture?") And in the contemplation of the Mizoguchi, find also an undercurrent of warning, and doom, in the Miyazaki.

Sansho the Bailiff is a textbook, every frame another carefully-arranged dissertation on composition, movement, brevity, art. The bittersweet reunion that ends the film, punctuated by a spare, plaintive wail of a nohkan on the soundtrack, is among the most heart-rending in motion-picture history. Beyond its archetypal resonance, the movie deals with issues of sacrifice, of honour, of the greater good no matter the individual cost. It's one of the great humanist works in this way, though it's also a vital human document, in that it represents the possibility of art--the creation of the hand--to speak eternal to the essential lament of existence. Sansho works wonderfully as a literal tragedy, but it works better as an existentialist parable--with little effort, it's possible to see it as a body with Sartre and Kierkegaard and as the most obvious antecedent, aside from any stylistic debtors to Mizoguchi, to similar movements in Terrence Malick and even Werner Herzog. The ferocity of its humanism is what elevates Mizoguchi's work. He's interested in centres of power only inasmuch as they are the epicentres of expanding ripples that devastate the helpless and the innocent. Mizoguchi's pictures represent a certain collective disappointment in traditional modes of leadership--more specifically, in leaders who, under the mantle of Heaven, have led the nation to ruin and despair. Often described as a feminist filmmaker (especially for his Ugetsu, Gion Bayashi, Red Light District, and Life of Oharu), Mizoguchi is more generally a champion for the weak. Small wonder that his films found traction in the United States during the Cold War and the dawn of this modern epoch, in which greater numbers of people came to understand how small their lives were within the machinations of impenetrable machineries.

Scholar Jeffrey Angles, in his commentary track for the Criterion release of Sansho the Bailiff, notes too briefly the "lovely parallel structure," an observation worthy of a deeper dive. It's so carefully constructed a film, in fact, that it recalls Hitchcock's Shadow of a Doubt or Budd Boetticher's Seven Men from Now, and we see that meticulous design in everything from the bearing and language used by the father in the opening sequence, echoed poignantly in the end by his lost son, to the multiple dissolves between different levels of powerlessness and servility. Passages through long grain, recurrences of pairs of fishermen, images of trees looming in foregrounds like traditional Japanese watercolours and woodcuts--all contribute to the thematic and visual rhythm of the piece. The last shot of Sansho, with Mizoguchi allowing his camera to track slowly, aimlessly, back and to the left as though it can't bear to spend more time with itself, represents an object-less spectator that feels to me like a commentary on helplessness, yes, but on a godless universe as well. I wonder if it's too much to speculate that Francis Ford Coppola's The Conversation borrows its own ending from here.

We're getting ahead of ourselves. Sansho the Bailiff is about the children of a just and merciful magistrate, abducted and sold into slavery while their mother is taken to be a concubine or geisha. The kids are brought to a factory and taught menial labour--their names, kept secret to protect them from their evil lord, are replaced by words meant to be mnemonics for their origins, so that one day they might recover who they are and where they're from. Years pass; the young woman, Anju (Kyoko Kagawa), retains her strength and independence, while her brother Zushio (Yoshiaki Hanayagi) has risen to become their cruel owner Sansho's (Eitaro Shindo) right hand, matching him in sadism and ambition. Zushio replaces Sansho's own son Taro (Akitake Kono) in this pursuit, Taro having proven himself too soft-hearted for the task of branding those of Sansho's slaves who try to escape. Taro represents the inability to disregard humanity in the name of following orders. The irony of the boy Zushio taking his place is that Zushio has been entrusted by his absent father to be a minister of mercy. Zushio undergoes an epiphany; Anju overhears a local ditty sung by some used-up crone in a neighbouring village; and the two plot to escape their captivity. Only one makes it. And Mizoguchi, in his poetry, expresses that the only thing that's immortal is an insensate nature--that there may not be a unifying intelligence in the world, but the quality of mercy is never strained.

Sansho the Bailiff is a film of surpassing, transcendent wisdom and beauty. It locates a place for the struggle of men among Nature and does so with a surplus of generosity for the smallness of its characters in all their doubts and temporary weaknesses. Tableaux of women sacrificing themselves in passages over, and aborted passages through, water further the themes of transformation, while the astounding reserve of its imagery serves as powerful counterpoint to the roiling violence and despair of the narrative. It lands with the force of Shakespeare and would fit well on a bill with countryman Akira Kurosawa's "Macbeth" adaptation Throne of Blood, sharing with it a sense of absolute structure and control married with real emotional depth. Look to the way that Mizoguchi lights the blacksmith's face in the dream sequence, to how Zushio stands in relation to his master Sansho, and to the rising steam and the screams just off-screen of an old man made the object lesson in Zushio's return to himself after a too-long divorce from the ideals of his father. There's eternity in Sansho the Bailiff, which contains a multitude of truths. 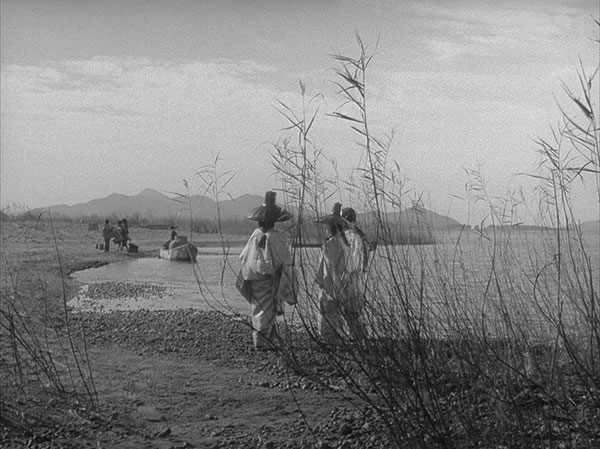 THE BLU-RAY DISC
Criterion follows their celebrated 2007 DVD release of Sansho the Bailiff, the Western world's home-video debut of this title, with a breathtaking Blu-ray upgrade that imports all the pre-existing supplementary material intact. Created from a 35mm fine-grain master positive, the 1.33:1, 1080p/AVC-encoded transfer features broad dynamic range without falling prey to Criterion's practice of contrast-tweaking. Grain is a little denser than it might've been had they gone back to the original negative, but the image is by no means noisy. Criterion's elves did a bang-up job of bringing the film up to code, with most of the lingering issues, such as dips in focus that coincide with scene breaks, likely beyond the parameters of restoration. The attendant 1.0 LPCM audio doesn't have a ton of depth but can hardly be called a disappointment, given the movie's origin and vintage.

Angles's full-length commentary is strong albeit focused on dissecting details of the plot and source material(s). Though Angles offers good insights into character motivation, the real value of this yakker is his discussion of the minutiae of language and social mores that Japanese audiences would have understood implicitly. Lines referring to Japanese mythologies, for instance, were lost on me the first time through: Had the treacherous boatmen during the abduction scene said something about the River Styx rather than their culturally-specific river of death, I would've better understood the mother's sudden panic.

Also returning from the DVD is a trio of interview featurettes, each one upconverted to 1080i. In the 10-minute "Performance," actress Kyoko "Anju" Kagawa remembers Mizoguchi as the first director in her experience to ask her to emotionally inhabit a character and "try things out" on the journey to discovering the core of her performance. It speaks to the humanist cant with which Mizoguchi infuses all his pictures. Next, in a piece titled "Production" (15 mins.), First Assistant Director Tokuzo Tanaka recalls Mizoguchi's perfectionism in regards to continuity and his gift for scouting locations. Finally, "Simplicity" (24 mins.) sees critic/historian Tadao Sato providing a nice, if superficial, overview of Mizoguchi's themes and techniques.

Criterion outdoes itself with its booklet insert this time, offering up, for starters, a 12-page essay on the film by Mark Le Fanu that places it in a cultural context in addition to analyzing its many themes. It's nigh definitive. Likewise included are two different versions of the tale retold in Sansho the Bailiff, presented in English translations for the completist to draw his or her own comparisons. (For the lazy, Angles's commentary does the heavy lifting for us.) It's a gratifyingly thick volume, bundled with the disc in a handsome, parchment slipcase that looks awesome from its privileged position on my shelf. 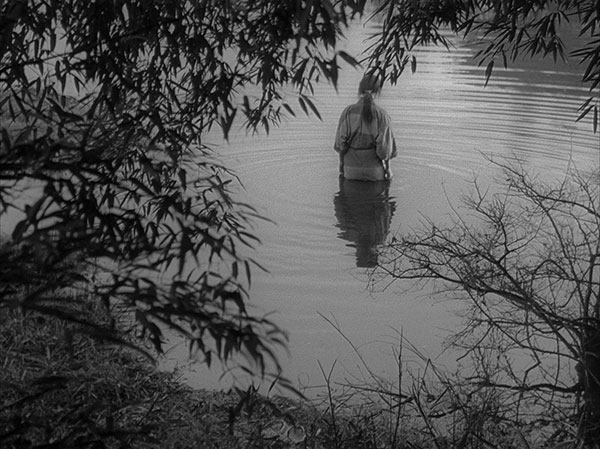