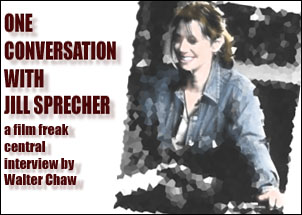 May 22, 2002|Small, cheerful, and self-effacing, Jill Sprecher is a girl of the midwest through and through. She speaks with the hint of a 'Fargo' twang, seems resigned to the fact that her films are of limited moneymaking potential, and tends to deflect questions about her role and philosophy as a director. Ms. Sprecher is a writer first, it seems, her tutelage under director Robert Wise (through a program offered by the School of Visual Arts in New York) debunked as "amazing, but just a really basic overview course, really." Her approach to filmmaking is one of a careful distribution of labour amongst those best qualified to handle the task. To that end, Ms. Sprecher (and her writing partner, sister Karen Sprecher) obtained the services of crack editor Stephen Mirrione (Oscar-winner for Traffic) for both her debut feature Clockwatchers and her follow-up, 13 Conversations About One Thing ("Good thing he's a friend of ours," Jill adds), while 13 Conversations was shot by acclaimed cinematographer Dick Pope (The Reflecting Skin, Mike Leigh's Topsy-Turvy and Naked). FILM FREAK CENTRAL sat down with Ms. Sprecher on her recent stop in Denver to promote 13 Conversations About One Thing. I began our interview by asking if there were conscious overriding themes running through her pictures.

JILL SPRECHER: Well, other than a low budget... (laughs) I guess my sister and I have always been just "working stiffs" so I think we really identify with the underdog but I have a hard time figuring out... You know, when we were writing 13 Conversations we thought we were writing a totally different movie than Clockwatchers and it's only after that we realized that a lot of the same concerns were coming through.

FILM FREAK CENTRAL: Do you find that it's difficult transferring the rapport and all the innate understanding that you might share with your sister to a cast tasked to perform your script?
Well, rehearsals were a luxury on these films that we just couldn't afford so we looked at our scripts as a blueprint for a work in progress. It's really something where you hand the work over to people who are much, much better than we could ever be and then we try to incorporate their spin on things. If it's a matter of something not being clear, I can explain it to the actor--but I have no experience as a director other than I felt like I had enough nerve just because of the authority I could bring to the screenplay. There was really no question an actor could ask that I didn't have an answer for. Also, in both cases, the actors brought a lot of their own quirks and interpretations and insights to the roles--both were very much collaborative efforts all the way through.

Is there a conflict between directing and writing?
Not at all, I think that direction is an extension of writing. I hope this doesn't sound too naïve, but I think that the director's real job is to find the very best people to do their jobs. In both cases I surrounded myself with people far more experienced than I was. It's important for me, also, to create a comfortable and safe environment so that these people--the talent, the behind the camera folks--have the best environment in which to do their jobs.

With your degrees in literature and philosophy, can you pinpoint themes or concerns you've carried over from these disciplines into your films?
I really love the short story form. 13 Conversations was envisioned as an anthology of a theme. For me, there's nothing really better than reading a good short story. I love Mark Twain, O Henry--I fall back on the American classics a great deal.

Were you intimidated by any of the people you've worked with [Parker Posey, Toni Collette, Alan Arkin, John Turturro...]?
Not on the set, but meeting them for the first time I was very intimidated. We sort of took a chance and made our wish list of people who we loved and we went after them--and the scary thing was that they all agreed to meet with us and expressed interest in the project. So we were elated, but terrified--but within five minutes of meeting them, they were all so nice that we just forgot about it. By the time it comes around to shooting, things are so fast-moving that you don't really have time to feel scared. But if I ever stopped, it was like, "Okay--who doesn't belong in this picture?" (laughs)

Tell me about some of the realities of low-budget filmmaking.
(laughs) There's the movie that you make and the movie that you make in your head. With Clockwatchers I thought, "Hey, this'll be great, I'll have this big anonymous office like in that Jack Lemmon film, The Apartment--just rows on rows of desks." But you're hit by reality that on your budget you can afford like six desks. You have to reconceive almost constantly. We had thirty days on both films--we'd scheduled thirty-five for 13 Days, mainly because nothing was shot on a stage and we had close to fifty locations, but had to cut a week off the shooting because of financial reasons. The money we had expected to arrive never showed up (laughs), so it was very stressful, kind of an on-the-fly project. Essentially, Alan had five days trimmed from his schedule, but the actors were such pros that we were able to do things in one take and in one set-up. They were so professional--most of [Matthew McConaughey's] stuff was in one take--it was just amazing.

McConaughey is fantastic in this film and in Frailty--I hadn't been impressed with him until this year.
I guarantee you that Matthew's done some good work, but so much depends on the film and on the editing process. He's such a dedicated actor. Unknown to me he had arranged to go out to the Bronx and hang out with some Assistant District Attorneys, watch some cases, get a feel for his character. John Turturro was just coming back from filming something in Mexico and he went to some guy in his neighbourhood in Brooklyn and got glasses and called me and said, " I've gotten my hair cut, I put a part in it"--so they really dedicated themselves to the project and understood what their characters were about beforehand--knowing that time was very limited on the set.

Why the long gap between films?
We finished the script for 13 Conversations in eight weeks--it was finished before Clockwatchers actually came out. What happened was I had to do a lot of traveling with Clockwatchers to festivals and we actually won a prize at the Turin Festival. Thankfully, it was a cash prize, about $18,000, and we took that money and worked on 13 Conversations. But right after Clockwatchers we actually went back to doing temp work and trying to raise funding to make our next movie, and suddenly it's three-and-a-half years later. We took odd jobs, used credit cards--we kept thinking that big break was just right around the corner. I think we would've walked away from it altogether, but periodically something encouraging would happen to keep us going.

I have to ask why you're doing the adaptation of a Michael Connelly novel for your next project--it seems such a departure.
I'm not!

No? The IMDb thinks you are.
I know! I went on and looked at that. I saw that Mary Harron did the adaptation and she'll probably direct it. Isn't that weird? I've found that IMDb can be a wellspring of misinformation because people can just write in with stuff that isn't substantiated. There's still something on there about 13 Conversations being about Matthew becoming a fugitive and I was like, "Yipes." (laughs) My name of all people coming up for that--it would've been my first real job. (laughs) The problem with that is someone else will direct it and everyone will think I got fired or something. Somehow this is all gonna come back and bite me!