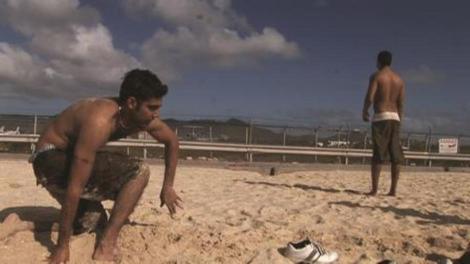 by Angelo Muredda Midway through When I Walk, Jason DaSilva's seven-year record of his experience since an early diagnosis of multiple sclerosis at age 25, the filmmaker wonders what his future will be, his life an ever-moving series of targets since illness and disability became a part of it. It's to DaSilva's great credit that that curiosity about what will become of him is developed in more than prurient ways with an unexpected but welcome detour into what it means to struggle through the normal checkpoints of a committed relationship--babies and all--when one also has a degenerative illness with an uncertain endgame. That isn't to say we should celebrate the film simply for being something other than a depressive's video diary of his body gone awry, but that DaSilva's hook is honestly come by and cannily placed. What's more, it pays off to the extent that DaSilva is a mordantly funny subject, candid about his bodily quirks, his vanities, and his anxieties.

Likable as he is as a star, there are elements of DaSilva's approach as a filmmaker that give one pause. Too often he indulges in canned positivity and Sundance quirk as means of granting levity to serious material that needn't be made more palatable. (It's nice that he was once a cartoonist, but that's at best a narcissistic excuse for the clunky animated interludes which variously perk us up or force somber reflection.) There's something to be said for alienating one's audience rather than sanding down the edges, and When I Walk is at its most bracing precisely when it is at its most ambivalent, as when DaSilva's spouse Alice bluntly confesses her frustrations with his condition in tandem with her unshaken support for him. Still, this is a rare and vital self-portrait of disability as something other than another person's metaphor: Its audacity outweighs its occasional timidity.