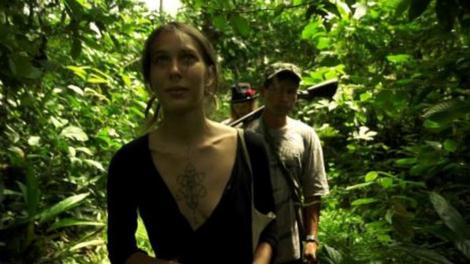 by Angelo Muredda "Don't you think we're already fucked anyway?" a twentysomething European reveller bathed in neon light asks an environmentalist recruiter early on in Fuck for Forest, Michael Marczak's gorgeously-lensed and strangely resonant nature documentary about a very strange pack of wild animals, the titular porn collective-cum-NGO. It's a decent question, but you don't get the sense that the sweet young Berliners to whom it's directed have much of a clue about how to answer. Their approach to saving the world, which Marczak never openly laughs at but never quite endorses either, is to turn the surprisingly good coin they make from their vaguely nature-themed amateur pornography into angel investments towards causes they believe in. A gently detached observer who drops in on the audio track only for occasional Jules and Jim-inspired backgrounders on our daffy leads, Marczak is an ideal mock-tour guide for the group's journey to Peru, where they scope out a group of locals who want to preserve the Amazon.

What starts off as an amiably hazy jaunt, anchored in some delirious set-pieces like an orgy-jamboree hybrid, is given narrative urgency by the group's journey to South America, where we witness a cringe-worthy collision between their freewheeling idealism (and real economic clout) and the actual people their investment would affect. Marczak stages this last act like an extended outtake from Apocalypse Now, to marvellous effect: One beautiful shot finds a couple of FFFers in silhouette, embracing against a rainstorm at sunset and effectively blocking out the land they're trying to preserve. That's an ominous hint of what's to come in a disastrous town hall meeting, where the group's spokesperson articulates his vision of free love, nudity, and natural harmony to a group of Peruvian landholders who want work rather than a confusing payout without any clear directive. "You are not understandable," the least offended spokesperson for the other side tells them, echoing the European girl--the same question made crushing by the setting: not a club this time, but a place where real people do real labour.