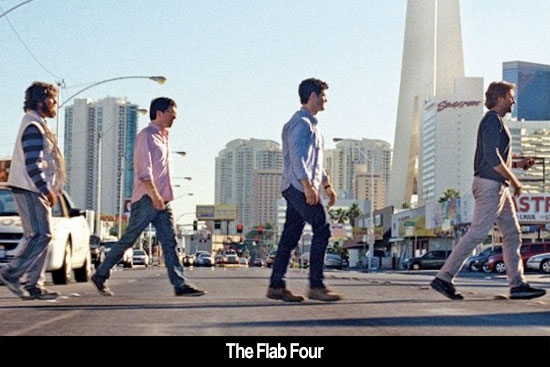 by Angelo Muredda When Project X spilled forth from its amniotic septic tank last spring, I read it as a prime example of a producer-driven form of auteurism pioneered by Judd Apatow. That found-footage chronicle of a house party-turned-apocalypse, I suggested, was a monument to producer Todd Phillips's equally noxious Hangover series, where the same Dionysian impulses and deep-seated hatred of the different--whether female, trans, queer, or disabled--were championed by a trio of middle-aged men. What a difference a year makes. If Project X was a brand consolidator and The Hangover Part II was a morbidly curious recalibration of its predecessor, displacing Phillips's demonic impulses and scarcely controlled misogynist rage from Bradley Cooper's Phil to Ed Helms's Stu, Part III is an actors' contract negotiation sputtered to life. Since the previous instalment, Cooper has become a respectable leading man and Oscar nominee and Helms has been savaged for the degeneration of his irritating Andy Bernard character on "The Office", while co-star Ken Jeong's fortunes have inexplicably risen. Consequently, gone now are the days of Phil's "Paging Doctor Faggot," along with Stu's loveable dude-rage and the Wolfpack's infinite jokes about Mr. Chow's shrunken Asian manhood. In their place is a surprisingly neutered, if inarguably more ethical, product with very few laughs and no reason for being.

Much as he presents as someone who couldn't care less about his movies' critical reception, Phillips has clearly taken some of the slams against Part II to heart. After filching every detail of the original film's structure for the first sequel, he's now more or less abandoned the titular conceit, keeping the road-movie dynamics and sidelining of Justin Bartha's useless Doug but ditching the retrospective detective narrative and get-to-the-wedding finale for something more straightforward. This time, the gang reassembles to intervene in the mental well-being of Alan (Zach Galifianakis), off his meds and broken up about the recent death of his father (Jeffrey Tambor). Having reluctantly agreed to drive Alan to a clinic, the Wolfpack plus Doug gets held up by Marshall (John Goodman), a blustering coke dealer who's had his life's savings in gold pinched by the recently jail-broken Leslie Chow (Jeong). With Doug as his hostage--seriously, would anyone mind if he disappeared for good this time?--Marshall sends the Wolfpack off to collect his enemy, who unsurprisingly eventually flees to Las Vegas, the site of the gang's inaugural hangover.

From Chow's dank prison escape over the credits to the men's listless search for him at Caesar's Palace, there's an oddly fatalistic air that hangs over each major set-piece, which is only intensified by a repeated and unexplained violence against animals just barely played for laughs. The argument of the series has always been that men find their latent spirit animals only when their basic survival instincts kick in, but nobody seems to be having a revelatory or even a very good time here--including Chow, whose queerness and radical sexuality have been safely holstered this time out. (At the very least, this means fewer racist and homophobic dick jokes, though one is still too many.) The most one can say in defense of this mirthlessness is that the film settles into a mildly pleasant melancholy in the last act, as Alan, always the purest character and lone source of grace notes, finally gets to come of age.

As for Phillips, there's something to be said for his spatial logic and compositional sense in the heist and chase sequences: the only moments that really work. The Hangover movies have never looked as ugly as they've sounded, and you have to give credit to series DP Lawrence Sher for his widescreen vistas and contrastive palette; as flatly as Goodman's entrance is written, there's clear visual intelligence in the way his height advantage over the Wolfpack is erased by the dwarfing wind turbines of Tehachapi, California. One leaves this dead franchise hoping Phillips refocuses his energies from joyless comedy to action, becoming the coherent man's answer to Michael Bay.

So Hangover 3 is a response to criticism of the previous film, just like how Todd Solondz responded to his critics with Storytelling? And eventually faded out the "shock" moments from his films? Weird, Phillips doesn't seem like someone who would care.