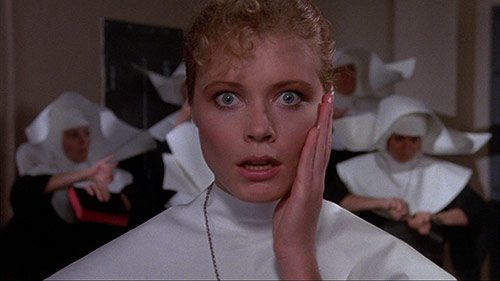 by Walter Chaw Sam Raimi's sophomore picture Crimewave is a nightmare, a mess, a calamity of rare scope but also one possessed of a singular, maybe misguided but definitely committed, vision. It wants very badly to be a feature-length Three Stooges sketch or Warner Bros. cartoon (one of the early Tex Averys), and so the thing it most resembles is Joe Dante's segment of The Twilight Zone: The Movie, stretched to a truly sadistic length (a deceptively scant-sounding 83 minutes) and thrown together by misadventure, studio interference, and a lot of talented people who didn't know what they didn't know. It's so consistently and dedicatedly cross-eyed badger spit, in fact, that it eventually takes on the surreality of a Max Ernst gallery, or an acid trip in a travelling funhouse. It's deeply unpleasant, even as fans of Raimi and the Coen Brothers (who co-wrote the screenplay with Raimi) busily trainspot all the auteur signatures in double time. What Crimewave represents is that peculiar artifact of a film that should have ended careers instead getting "lost" by a bumfuddled, betrayed studio for long enough to allow Evil Dead II and Blood Simple the opportunity to cement reputations before this one could bury them.

Vic (Reed Birney) is a former security guard on Death Row for multiple murder who, the film reveals in flashback, has been framed by a pair of cartoon exterminator villains (Blade Runner's "Leon" Brion James and Popeye's "Bluto" Paul L. Smith) hired by a real-estate developer (producer Edward R. Pressman) to kill everyone standing in the way of his development plans. That's it, really. Vic falls in love with a pretty girl (Sheree J. Wilson), who is herself in love with an unctuous guy (Bruce Campbell)--said unctuous guy played by the actor originally tabbed by buddy Raimi for the movie's lead and who could have single-handedly made this a cult classic instead of a cult curiosity. There's a big difference.

Crimewave is essentially the Chiodo Brothers' Killer Klowns from Outer Space without the sense of joy and lack of pretension. The real problem with it is that you get this feeling throughout that the picture views itself as a holy mission as it's presenting itself as a lark. It's a serious try to do something DIFFERENT and, as such, tends only to feel desperate and highlight exactly how special Jerry Lewis truly was. It's the kind of movie, precisely, that The Evil Dead was not, so that the joke of placing A Farewell to Arms on top of a stack of books used to hold down a severed, possessed hand in that film, works, while a similar gag of putting "megahurts" on a voltmeter for the killer's murder weapon in Crimewave, doesn't. I do love a sequence where one of the killers chases harried housewife Helene (Louise Lasser) through an endless tunnel of doors, however--the only moment in the film, frankly, that approaches the focused inventiveness of the Chiodos' shtick.

What's so wearying isn't the bowling balls to the head followed by the birdie noises, it's the vision it took to bring to bear a film that pays complete, numbing hommage to the sort of surreal slapstick goofiness so beloved by Raimi and the boys. It works when Norville Barnes gets his foot stuck in a flaming wastebasket, for instance, or when Ash breaks a series of plates over his head; it works, in other words, when it's an accent note rather than the melody, chorus, bassline, and drumbeat--and it doesn't work at all as the motivating principle for an entire feature. At least it doesn't if you're not Jacques Tati. In other words: I get it, I get it. 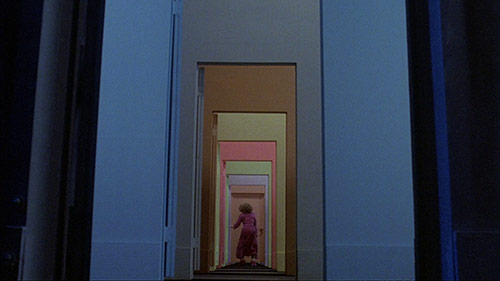 THE BLU-RAY DISC
Shout! Factory brings Crimewave home for the first time on any video medium in a laudable Blu-ray edition. The 1.78:1, 1080p presentation of the movie proper resists putting an HD gloss on the fundamentally flat, '80s image, but neither the copious grain nor the wild fluctuations in contrast and (colour) tone provide much of a distraction. The source materials are in remarkably good condition, probably because they haven't seen the light of day in almost thirty years. The monophonic 2.0 DTS-HD MA track presents every note of that old-cartoon standby "The William Tell Overture" in garish, repetitive fidelity. It is to sigh. The real jewel in this crown is an audio commentary by Bruce Campbell and supplementals director Michael Felsher that is frank, hilarious, self-excoriating, and vulnerable in a way that clarifies the real pain of crafting something with no hope of it working and under impossible circumstances. Campbell makes it clear that this could have been not just a career-buster, but a friendship-buster. What it did instead was pull the team together like soldiers bonding under heavy fire.

A separate featurette with Campbell ("The Crimewave Meter," 15 mins., HD) is more of the same, with Bruce confessing that the years this film was mostly hidden from public view was great for all involved. A similar short with producer and co-star Ed Pressman ("Made in Detroit," 8 mins., HD) has the man behind stuff like Badlands, Sisters, the Frankenheimer Dr. Moreau, Wall Street, Larry Fessenden's Wendigo, and on and on talking about screaming at Louise Lasser to shut the fucking window. Really, he seems like a lovely person. Ditto Reed Birney, who in his own sit-down ("Leading Man," 16 mins., HD) recounts how he came to the production, how he spent the year after it in semi-retirement, and how his son now loves Crimewave. He also confesses to being terrified of both James, who destroyed his hotel room during the shoot to chase demons out of the light fixtures, and Smith, whom Birney could never disassociate from Smith's role as a sadistic prison guard in Midnight Express. An "Alternate Title Sequence" (30s, HD) reveals that of the half-dozen titles for this film, one of them was "Broken Hearts and Noses." Rounding out the platter, an animated photo gallery with stills and promo art (7 mins., HD), plus a 2-minute theatrical trailer (HD) that doesn't do enough to warn you. A DVD version of the film is included in the keepcase. 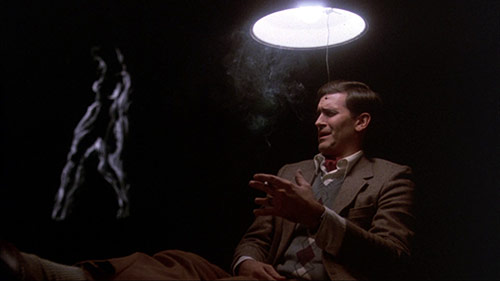