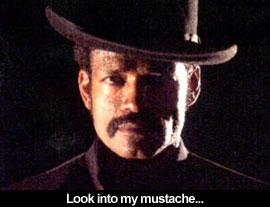 by Walter Chaw In 1971, Melvin Van Peebles, weary of the way that Hollywood portrayed people of colour, set out under the guise of a non-union skin flick to make Sweet Sweetback's Baad Asssss Song, the highest-grossing independent feature of its time, and easily the most influential African-American picture of the modern age. It featured a black man as its mustachioed hero, sexual and virile, unafraid to stand up to police corruption and the stultifying social oppression of "the man" ("Rated X by an All-White Jury," its poster proclaimed), and it allowed him to rebel without punishing him in the final reel--a radical idea then, a radical idea now. Mario Van Peebles, thirty-three years after the fact, has crafted a surprisingly edged ode to the making of his father's film, Baadasssss! (originally titled How to Get the Man's Foot Outta Your Ass), which manages the tricky feat of replicating the insouciant rebellion of Melvin's political, if not cinematic, masterpiece while somehow sidestepping the trap of hagiography. Melvin, played by Mario, comes off as a man of principle, but also an adulterer, callous towards the needs and fears of his children, as well as the kind of battlefield general who keeps the goals of victory to himself.

Chronicling the trials suffered by Melvin on behalf of his project, Baadasssss!' pseudo-documentary format is rollicking for long stretches and poignantly topical, given that the fight for fair representation in cinema is still long from won. The ideal isn't an equal number of films to gratify every minority group, but the hope is that there might someday be a widespread recognition that pictures like New York Minute--films that mistake broad racism for acceptable character shortcuts or "just" children's fare--are part of the problem. We're not so far from the cultural mindset that forgives Mickey Rooney in Breakfast at Tiffany's when garbage like the Olsen Twins' abomination is most-often described in popular criticism as "harmless."

The great surprise of Baadasssss! isn't the offhand manner in which it recounts the travails of finding funding for an unpopular film project, nor its breezy exposé of how trade unions have pushed a lot of Hollywood productions out of the country. Rather, the surprise is how affecting it is as a rallying cry for the hurdles blacks still have to overcome until stuff like Bringing Down the House or The Alamo is seen as outrageously offensive. At the very least, Sweet Sweetback's Baad Asssss Song represents a start: Asian-Americans (as for any number of other groups) haven't seen anything like the equivalent, and so movies like Freaky Friday continue to mine damaging stereotypes for convenience. (It's a much different picture if the magical catalyst for transformation is an elderly black man and his magic watermelon instead of an elderly Chinese woman and her magic fortune cookie.)

The importance of Melvin's picture, then, is immeasurable, even if it gave birth to a genre, Blaxploitation, that was soon hijacked by the very monoliths it was ostensibly fighting (demonstrating again the elder Van Peebles' homily that the only colour in Hollywood is green)--and what are we to make of Denzel Washington, arguably the most-respected black actor in the United States, having his love scenes with white women excised so as not to offend his fans on either side of the racial divide? Baadasssss! isn't perfect, but it feels passionate, and its outrage remains current. With so many movies every week that don't matter and won't be remembered at all, the fact that Baadassssss! is polarizing and potentially galvanizing earns it the benefit of the doubt. Originally published: May 28, 2004.