***/**** Image A- Sound B+ Extras B+
starring Catherine Deneuve, Fernando Rey, Franco Nero, Lola Gaos
screenplay by Luis Buñuel in collaboration with Julio Alejandro, based on the novel by Benito Pérez Galdós
directed by Luis Buñuel 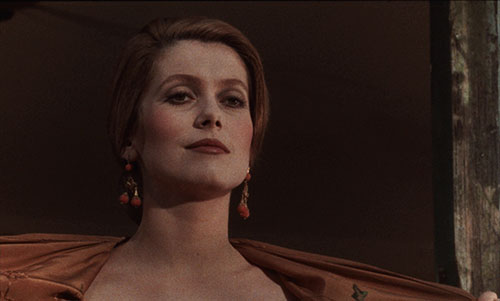 by Angelo Muredda You might not think it from overdetermined schlock like Simon Birch, but disability is a tough trope to wrangle, an errant bodily signifier that doesn't always play nice. Just think of Million Dollar Baby, which tries and fails to use Hilary Swank's impairment as a narrative shortcut for Clint Eastwood's transformation into a tender father, troubled Catholic, and euthanizer-turned-agent of transcendence all at once. Eastwood the director has to stumble over the mechanics of his scene partner's newly-maimed body and horizontal status, fudging the timeline so that her bedsores appear to sprout within minutes of her injury and puzzling over how to frame her, whether as a head poking out of a hospital bed in the background or a wheelchair-sporting cyborg parked in dead centre, staring out her hospital window like a forlorn puppy. That representational awkwardness is so common that in disability studies, it even has a name: Ato Quayson calls it "aesthetic nervousness," meaning a text's tendency to collapse in a fit of nerves before the matter of how to represent a disabled body.

Aesthetic nervousness is often the sort of thing one comes down with, like a cold, but it brings a wild jolt to Tristana, which, prior to its amputation-inspired last act, is in danger of becoming a slick late-life career sampler for then-70-year-old Luis Buñuel. A long-in-the-works adaptation of the eponymous novel by Spanish realist Benito Pérez Galdós, whose work also inspired Viridiana, Tristana opens with the titular 19-year-old orphan (an especially luminous Catherine Deneuve) adopted by dissipated nobleman Don Lope (Fernando Rey), who preaches that those in power must defend the weak at all costs only to promptly treat his new child bride like a servant. As surrogate fathers go, Don Lope is mostly heavy-handed, restricting Tristana's outdoor privileges and forcing her to listen to his confused Marxist rhetoric, sermons that end in him celebrating his layabout status while endorsing the ennobling quality of hard labour. His less than paternal instincts towards Tristana, who at first seems oblivious to his sexualization of her and then only slightly less so ("I wish he loved me a little less," she muses), nudge her into the arms of rakish painter Horacio (Franco Nero), where she stays until a sudden illness calls her back to her subordinate position under the older man, whose all-consuming passion and doting is even more insufferable now that she's immobile.

Tristana's thematics are no stretch for Buñuel, for whom battles of the sexes, women in bloom, and religious hypocrisy were nothing new at this point. But as with Don Lope, who's all too happy to cheer on the future as long as he gets to keep his status, there's something affable about Buñuel's facility with his pet motifs, not to mention our recognition of the steadiness behind surrealist flourishes like Tristana's dream of the patriarch's severed head swinging like a bell clapper. There's comfort in such signatures, and in Buñuel's offhand mastery of both form and text in his fluid staging of drawing-room conversations, the camera pivoting around the table to properly linger on each speaker. That unfussy style is nicely keyed into dialogue best described as barely funny, as when a passing couple is summarily dismissed for their "bovine air of resignation."

While all of this is fine, albeit minor, the film never really gets its legs until the heroine loses hers. The fun has little do with surprise, given that Tristana's corporeal justice for transgressing with the younger man--via a tumour that grows just as she's coming into her more cosmopolitan self--is telegraphed by Don Lope's eerie pronouncement that "If you want to keep a woman honest, you must break her legs and keep her home." Yet the flagrantly bad taste of the denouement, which trades in tired Renaissance tropes about the one-to-one correspondence of a beautiful body and a beautiful soul (even as it ironizes them), activates a grotesque playfulness amidst all this strained politeness. After her operation, Buñuel roves under the piano to find his leading lady's stump, a self-implicating rhyme of an earlier moment where a deaf young man tries to lift up her skirt and is gently admonished. Even more evocative: an image of Tristana's garments casually strewn about the artificial leg lying on her bed--the most significant disclosure of Deneuve's status as a sex symbol granted via a prosthetic that's effectively standing (or lying down) for her. Towards the end, when Tristana's transformation from woman in a refrigerator to vengeful goddess is near complete, Don Lope revels in her dependence on him, offering that she's arguably "more attractive now, for a lot of people." Her answer, that it "takes all kinds," is a wonderfully-timed joke, yet it's also a smart take on Buñuel's own primal interest in the power of a disabled body to disarm and throw the basic tenets of representation into disarray. THE BLU-RAY DISC
Cohen Media Group brings Tristana to Blu-ray in a 1080p transfer pillarboxed at 1.66:1. The new restoration is remarkably strong, considering it's apparently a Frankenstein cobbled from numerous sources. Print damage is minimal, brief flashes of colour, like the royal blue on a few boys' uniforms or the deep red of a shawl, are vivid, and detail is fine. This is a muted presentation overall, but faithfully so, given how the stodginess of Don Lope's world tends to extend to his home's earthy palette as well as Tristana's brownish wardrobe. The 5.1 DTS HD Master Audio tracks in Spanish and English are equally erviceable. Deneuve and Nero recorded their dialogue in French and Italian, respectively, so their voices are a bit off, but dialogue is crisp and the Chopin sure sounds nice. This is a tasteful remix where the 5.1 is mainly used to anchor the centre channel and increase fidelity.

Some compelling supplementary material helps position Cohen Film Collection as a worthy companion to the Criterion Collection, particularly for scholars and cinephiles with a historicist bent. The commentary track consists of an informal conversation between Deneuve and critic Kent Jones, who wisely gets out of the way in soliciting stories from the grand dame. Though their chat features a lot of good anecdotes about her working experience with directors like Roman Polanski, Peter William Evans's audiovisual lecture from an empty theatre, "Luis Buñuel's Tristana: Repression and Desire" (32 mins., HD), goes a bit deeper. He elucidates much of the film's political context and Freudian content while positioning both within a thematic reading focused on Buñuel's fraught depiction of freedom and the role of women in 1920s Spain. There's also a one-minute alternate ending (in HD), though the one in the film proper strikes me as punchier. Rounding things out are a pair of trailers--one for the restoration, the other a French theatrical promo--plus a substantial booklet. The latter contains a recent essay on Tristana's sly subversiveness from CINEASTE editor Richard Porton, a more old-fashioned excerpt from Raymond Durgnat's 1977 book on Buñuel, and snippets from Deneuve's production diary, full of glorious nuggets like the following observation of Nero: "Hard for a Latin man to fully accept the actor's position in life." Poor guy.