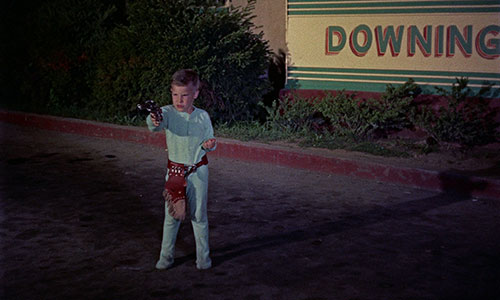 by Jefferson Robbins Burt Bacharach and Mack David's sock-hoppin' title-track lyrics aside, the key creature of Irvin S. Yeaworth Jr.'s The Blob never "leaps." Sure, it sort of lunges up a stick to absorb an old hermit's paw, but mostly what it does is ooze around, digest flesh, and act as the centring point for the film's fine balance of character, pacing, and grace in the face of certain doom. While The Blob has its light moments, it's seldom again as carefree as its opening credits would seem to portend. The blob crashes within its meteor-case into a riven small-town society and drives it--the way all good monsters do--to better know and reconcile with itself.

In retrospect, we question Yeaworth's instincts when he opens with a gigantic closeup of...the back of Steve McQueen's head. The 28-year-old actor wasn't iconic then, so who was to know? His presence here amid putative schlock has become one of those great "Jennifer Aniston was in Leprechaun?" moments of film discovery, except with a real actor. "Steven" McQueen, as he was billed to play teen protagonist Steve Andrews, pulls the human characters together as surely as his gloppy nemesis. Were he to play his lines as anti-naturalistic as practically every other person on screen with him, the whole thing--built out of exploitative kitsch to begin with--would collapse under its own genre fallibility. But Steve's just a kid on the make, trying to impress--hell, trying to introduce himself to--his girl Jane (Aneta Corsaut, frustratingly demure even while falling over a stack of canned beans), keep up his rep with potential drag-racing rivals with names like Tony and Mooch, and get home for curfew before the local hardass cop, Sergeant Bert (John Benson), catches his plate number. It helps that he's not alone against the world: he's pals with Bert's superior Lieutenant Dave (Earl Rowe, as wide-shouldered a slab of authoritarian ham as '50s drama ever produced), and his dad (Hugh Graham) backs him up rather than tearing him down when he winds up in the kind of trouble for which he has no name.

This is the sort of balance I mentioned before: The characters simply fit together, no one out of place or operating in a dramatic vacuum, all wending their way towards perfect conclusions for their individual stories. A widowed war veteran finds himself called up to make a one-in-a-million sniper shot. An upright school principal commits an act of juvie-style vandalism for the greater good. The "reckless" young men of Steve's peer group organize into a teen brigade to spread the word and save the day. "We had to make this noise so you would listen to us!" Steve exhorts the town elders he's rousted from their beds. "So we could warn you!" Against the grain of youth exploitation films of the time and after, listen they do. The Blob expresses no hope of appeasing the Forces from Beyond, but it has great faith in human beings. Sadly, or perhaps instructively, the only character shut out of this fellowship is the shack-dwelling old man (Olin Howlin) who pokes the nascent Blob and becomes its first victim. Howlin conveys the horror of his situation physically, almost wordlessly, and it's a beautiful performance. Only later do we realize nobody in Steve's little backwoods burg of Downingtown knows his name.

A lot of this buoying optimism may have to do with the movie's provenance. A strictly commercial enterprise by a Pennsylvania film studio and director to raise money for the 16mm religious and moralistic pictures that were their lifeblood, The Blob puts the human spirit in peril, but then uplifts it on themes of community and cohesion. Though no one in Downingtown would survive if not for Steve's repeated warnings, Steve wouldn't survive without the town. The Blob goes so far as to briefly weld Steve, Jane, and Jane's little brother Danny (Keith Almoney) into a symbolic instafamily, huddled in a diner basement and waiting for the end. "Try to go to sleep," Jane tells Danny, as the Blob threatens to suffocate them all. It's essentially a mother's instinctive prayer for a painless death, if her child must die. 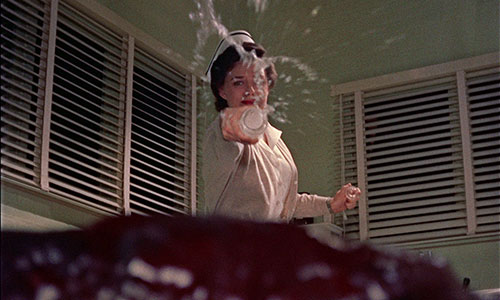 This, the darkest moment of the film, is accented by Yeaworth's choice to shoot the thwarted rescuers outside the diner--each of whom we know by name now, each of whom knows Steve and Jane as a peer or surrogate child--against a hopelessly black background, as though they're in the belly of the whale alongside him. Yeaworth has a hero in DP Thomas Spalding, whose golden lighting and dappled shadows adapt to scenes both intimate (Steve and Jane agonizing over how far they should go in his convertible--not even in the backseat) and portentous (Howlin's ill-fated first contact, later homage'd by Stephen King in Creepshow). Just like the Blob suffuses the town, beauty suffuses this genre picture at many, many points: the beast cheese-grating itself through the cinema's air vent to eat the projectionist, preceding the you-are-there vérité of a screaming, stampeding evacuation; the painted backgrounds and animations; the disturbing POV shot when a nurse attacks the Blob with acid; the camera sidling in close on McQueen and Corsaut as they make their case to the cops; and the rolling, sliding alien itself. In its shooting angles, The Blob shows the instincts of a 3-D feature, but 3-D might have actually lessened the impact. Effects director Bart Sloane built and set in motion one of the most memorable screen monsters in history out of silicone, balloons, and trick photography, and never got an Oscar. Remember that.

The Blob is not a square movie, even if you choose to take the Blob as a metaphor for creeping, absorptive Communism. (That take doesn't necessarily scan for me, though, since it's the kids who are aware of the threat while authority figures remain blind.) Yeaworth is tuned-in enough to incorporate mild metatext and satire. The straight-arrow adults, forged by World War II, are nonetheless often figures of fun, like the air-raid warden/volunteer firefighter who doesn't know which hat to wear when both sirens go off at once. Little Danny empties his toy pistol at the invasive mass, then throws it, á la "The Adventures of Superman". And in the gooey attack on the local movie theatre's midnight spook show, Yeaworth traps The Blob's background players in the same circumstance as The Blob's audience. THE BLU-RAY DISC
Criterion's Blu-ray reissue takes The Blob seriously, but doesn't go so far as to bestow its trademark abstract box-cover art. Artist Mike Koëlsch has the titular beast looming over a desperate McQueen in a scenario that could practically be an original-release poster--all the period and genre trappings are there. That's a graceful recognition of the film's historic place: It's Criterion-level important, but not in the way that Knife In The Water is important. However, I think we can agree it's more important in every way than Armageddon.

The film, presented at its original aspect ratio of 1.66:1 in a pillarboxed, 1080p transfer, is probably the cleanest it's looked since it hit cinemas--maybe too clean, coaxing out the flaws and defaults in Yeaworth's instructional-film roots. (And it's newly obvious that camera operator Wayne Trace has a hard time maintaining deep-field focus, particularly on some of Yeaworth's dolly shots, which may owe to a budget limitation that constrained the choice of lenses.) But the colours! Steve's Plymouth convertible is so crystalline blue, you wince to see foe-turned-buddy Tony (Robert Fields) lean against it. Tony's patterned shirt seems like it should all run to the same hue, yet its green and turquoise checks remain distinct. The Blob itself has the veins and shadings of red one sees in a Tootsie Pop. Give Criterion's restoration team big props for the lack of artifacting in this artifact--and the lack of edge enhancement, print damage, or unnatural grain, for that matter. If the centre-channel LPCM audio doesn't wow, it likewise gives a clear, straightforward impression of what audiences heard in 1958, and that's all a fan wants for a movie like this.

The Blob's two feature-length commentaries are reproduced from Criterion's 2000 DVD edition. Producer Jack H. Harris, who shepherded The Blob from development to theatres, entertainingly narrates the movie's making on one track, sharing time with film historian Bruce Eder. Harris recalls spotting McQueen understudying for Ben Gazzara onstage in Michael Gazzo's A Hatful of Rain and tapping him for the lead. A producer who had a Hitchockian way of cameoing in his own movies, Harris put up a share of the production money himself, as did Yeaworth, and recalls walking on eggshells until Paramount agreed to slap it on a double bill with I Married a Monster from Outer Space. The Blob wound up drawing far more favourable crowd responses in previews, and ultimately shipped as a stand-alone feature. McQueen was on the hook for Yeaworth's follow-up, The 4D Man, in 1959, but by then his fame and asking price were stratosphere-bound. "I must say, I got a little tired of him on The Blob," Harris chortles. "He was a lot of trouble."

Undiscussed here are McQueen's on-set coddling of his huge dog Thor or his habit of toying with a rifle, although there are plenty of other specifics. Yeaworth, on a second track with actor Robert Fields, notes for instance that McQueen once borrowed his car and returned it with a huge dent in the roof. Fields, just eighteen when cast as Tony, idolized McQueen and credits him in part with leading Fields to try out and win a place in the Actors Studio years later. "Fuck 'im," McQueen once told Fields in confidence when Yeaworth questioned the younger man's acting choices. "Keep doing what you're doing." "Beware the Blob," the title tune by Bacharach and David (the older brother of Bacharach's longtime musical partner Hal), disturbed Yeaworth when he finally heard it--it was tacked on prior to distribution, replacing the song his wife Jean had written for the picture.

Throughout the chat, Yeaworth, an ordained minister who turned away from mainstream filmmaking not long after in favour of Christian multimedia presentations, comes off as a humble and technically adept do-it-yourself-er who was proud to have helmed a movie that became a sensation. He also never looked back: His commentary marked the first time he'd viewed The Blob in more than forty years. "He made The Blob with me for the purpose of learning how to do it," Harris says, "and his main purpose was getting the Word out." Yeaworth died in 2004. Another extra, "Blobobilia!," is a stills gallery of collector Wes Swank's vast empire of The Blob-related posters, standees, photos, and set artifacts. The HD trailer (2 mins.) tops off the disc. One of Criterion's typically invaluable leaflet essays is found inside the case, this one by British critic and novelist Kim Newman, who knows a thing or two about metatextual horror. Follow Jefferson Robbins on Twitter 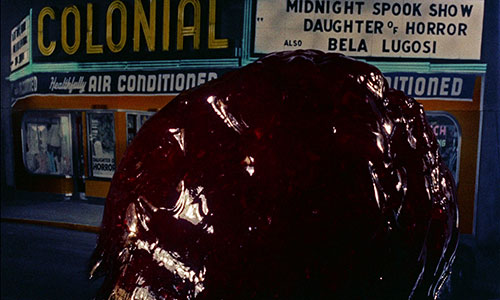