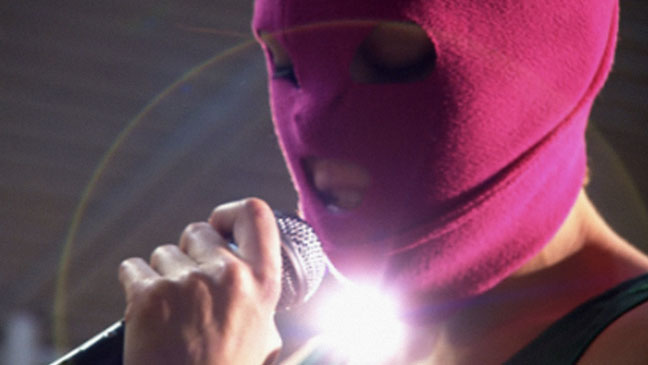 The trouble with Lerner and Pozdorovkin's approach is that it too often reproduces (albeit in an ironic way) the state's demonic image of the collective. A brief interview with a church leader done up like a punk acolyte himself is a bracing reminder of how Pussy Riot's method of spontaneous occupations of sacred spaces is an offense not only to the establishment but to its retrograde view of women as well: Women like Nadezhda, he offers without blinking, would have once been burned at the stake for their impudent expressions and pouty lips, let alone for burlesquing the Church. That's a horrifying thought, though the filmmakers seem to take it as permission to amplify the otherness of their most aggressive subject, framing Nadezhda in eerie closeups and scoring some of her cryptic utterances to music that wouldn't be out of place in a thriller. That cheapens the real rebellion of these women, incidentally captured in the courtroom footage that makes up most of the second half. Their greatest challenge to the systems they hold in contempt, this material suggests, is not their demonic affront to expectations of women's civility but their refusal to explain their protest or defend its aims in clear terms--their insistence on shock, not horror, as their method. Where Pussy Riot's mission is avant-garde, then, Pussy Riot: A Punk Prayer's tends to come off as tame.