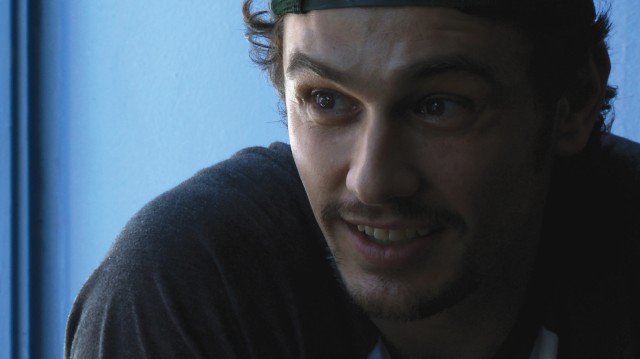 by Angelo Muredda Whatever goodwill James Franco built up with his mesmerizing turn in Harmony Korine's Spring Breakers is bulldozed by Interior. Leather Bar., his second infuriating Hot Docs appearance in as many years. Ostensibly a recreation of a lost 8-minute sequence from William Friedkin's Cruising that was to show Al Pacino's undercover detective intimately crowdsourcing a gay S&M bar for a serial killer, this is nothing short of an incompetent lecture on queer theory and the importance of being a heterosexual ally to the community from a vain graduate student and, even worse, a tourist.

If the conceit seems interesting enough, think again: The Friedkin-inspired orgy Franco and co-director Travis Mathews are staging is a phantom subject at best, depicted only via some hazy, Dutch-angled behind-the-scenes footage of chaste bum-paddling and one tepid onscreen blow job glimpsed over Franco's shoulder, his hand resting under his chin as he considers which major American author (from his Major American Authors course at Yale, no doubt) to adapt next. The real subject here is Franco's gift to the queer community, discussed at length by some of the extras who openly wonder why a famous straight man would be so interested in their sex lives (good question) and to his homophobic bro, the Pacino stand-in who just might engage in his first kiss with a man before the shoot is through.

Will he do it? Will Franco cite his Yale supervisor Michael Warner's landmark book on the challenges the marriage equality struggle poses for gay rights activists? Will he trot out specious arguments about how pop culture has mainstreamed gruesome violence but not gay sex, as if the latter is somehow outré enough to place beside the former? Yes, yes, yes, and who cares?