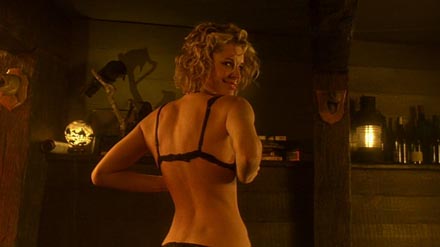 by Walter Chaw The first script written solely by Brian De Palma since his 1992 film Raising Cain, Femme Fatale, like that film, rips off the famous murderer-reveal of Dario Argento's Tenebre. Come to think of it, the picture is essentially a rehash in one way or another of every film De Palma's ever written (the voyeurism and body switch of Body Double, the phallic film equipment of Blow Out, the steamy stall-sex of Dressed to Kill, the evil twin thing and split-screen of Sisters, the voyeurism again of Hi, Mom!, and so on)--and because De Palma's best films and screenplays were iterations of Hitchcock (and sometimes Argento, the Italian Hitchcock), Femme Fatale is as stale and detached as the third-generation copy that it is.

More than familiar, it's a cheat, a lazy bit of self-indulgence that hopes to make hay with the idea that if Hitchcock's possessor of the gaze and water imagery is pushed to the text from the subtext, then the whole of the extant narrative from plot to character becomes the audience's flaccid MacGuffin. Presuming that the audience is daft enough to be interested in something it's not supposed to be interested in, however, is a far trickier feat to accomplish than having one's characters chasing a red herring--the presumption that we're interested in the story at any point isn't so much coy as it is insulting.

Laure (Rebecca Romijn-Stamos) is a cat burglar attending Cannes who makes time with a diamond-clad model (Rie Rasmussen) before getting away with a fortune in stolen jewelry, to the consternation of her snarling Gallic partners in crime. She falls from a balcony, drifts off to sleep in a bathtub, meets her French twin, spars with a ridiculous lisping photographer who resembles Antonio Banderas, and fails to convince that she has the smarts to be half as dangerous as Femme Fatale hopes she seems. Barbara Stanwyck she ain't--Mary Astor she ain't.

De Palma masculinizes her by giving her first the lascivious camera then the power of her sexuality (for as naked as Romijn-Stamos is in the film, she's only really naked in one impressionistic underwater (natch) shot); then he confuses the issue with a series of castrations for her and her photographer pal that demonstrate a grasp of the evolution of the symbol but not its usage. Deluges that Hitchcock employed to announce sea changes in his femmes are jack-hammered by De Palma (note overflowing aquariums counter-posed with our Laure-fish in Almay tubs), the degree of magnification in each of the director's flash-and-sizzle metaphors such that they take on the taint of Salieri bitterness instead of the glow of an early De Palma's respectful, oft-brilliant sense of homage.

While De Palma was never a director of subtlety, he was once an artist in love with the purity of the medium rather than this film's bitter stylist, who's just too good for it all anymore. What besides cynicism and ennui--and sadism--would impel the man to cast Romijn-Stamos in a speaking lead (sometimes opposite herself, the horror) and position Banderas opposite her? Opening with an extended spoiler of Double Indemnity's denouement, Femme Fatale fashions itself a mockery of the film noir clothed in the sheep's clothing of a lively updating.

In truth, the picture feels like the kind of smirking post-modernist revision that the horror genre suffered through in the wake of Scream: a self-aware film noir that does for the genre what Airplane! did for the disaster movie, but with the belief that no one in its audience can figure out that they're being goofed on. (The idea that a noir can't succeed in the modern parlance without its abstraction into extremes is a belief betrayed by the graceful, similarly self-aware movements of The Man Who Wasn't There.) Never nervy, often unintentionally hilarious, and only about as sexy and dangerous as an actress in a role that reminds at every turn of Elizabeth Berkley's flopping dolphin-gasm in Showgirls, Femme Fatale isn't what it wants you to think it is (noir), and it isn't what it thinks it is (clever satire/updating of noir). It is, in fact, just angry candy of the slickest variety: Looks appetizing, but watch that aftertaste. Originally published: November 6, 2002.

THE DVD
by Bill Chambers Warner's Femme Fatale DVD presents the film in a gorgeous-as-hell 1.85:1 anamorphic widescreen transfer with lovely though ultimately not very showy Dolby Digital 5.1 audio. The image is so clear as to unearth details blurred by the lowered standards of today's projectionists, such as background "déjà vu" posters featuring Rebecca Romijn-Stamos. The complexity of Femme Fatale's centerpiece photo mural shines through and individual elements burst with colour despite the cool hues of DP Thierry Arbogast's palette. The soundmix is good, too, with strong bass present for thunderclaps and some pleasing wrap-around during the 'Bolero' passage of Ryuichi Sakamoto's score.

Too bad hackmeister Laurent Bouzereau handled supplemental chores: the three featurettes contained herein do little to bolster one's admiration for this lesser De Palma. "Visualizing Femme Fatale" (11 mins.) is, in fact, about the casting process (we learn that Melanie Griffith forced Banderas to get on board), while "Femme Fatale: An Appreciation" (24 mins.) proves that recapping the film's plot is even more laborious than experiencing it. "Femme Fatale: Dressed to Kill" (2 mins.) is a gratuitous two-minute compilation of Femme Fatale clips and production stills--Bouzereau must get paid by the edit. The platter is notable for superior video quality, for including the picture's nifty, if culturally indecipherable French trailer along with the American one, and for interviewing both Brian De Palma and his brother Bart; although their sibling rivalry is the source of much angst for Brian in the early chapters of Julie Salamon's The Devil's Candy, they appear to work well together. Cast & crew bios round out the disc. Originally published: April 10, 2003.