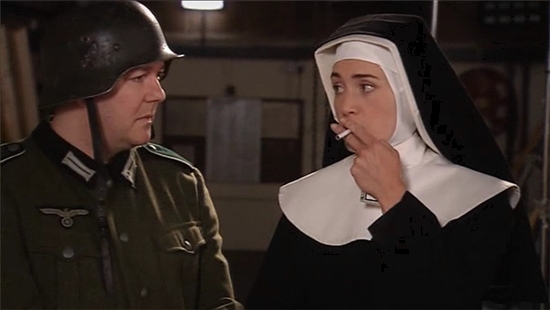 by Ian Pugh The oft-invoked reason as to why we indulge in "entertainment journalism" is because it demystifies the culture of celebrity. Proof of star public outbursts and make-up-free faces, in other words, forces them to "our" level of humanity. At first glance, Ricky Gervais and Stephen Merchant's BBC sitcom "Extras" feeds into that fascination through parody: Proposed as unreachable titans via eponymous episode titles, the guest stars who tower over "background artists" Andy Millman (Gervais) and Maggie Jacobs (Ashley Jensen) are invariably revealed to be windbags and/or perverts. It's possible to see this as an attempt to deter us from rumour-mongering: Kate Winslet becomes a bitter Oscar bridesmaid ("You are guaranteed an Oscar if you play a mental," she says upon seeing a woman with cerebral palsy), for instance, and Ben Stiller--improbably directing a film about the Yugoslav Wars--presents himself as precisely the kind of loser he plays in the movies but with twice the ego.

And yet, although self-deprecating humour endears us to big names, it also distances us from them--when oft-whispered secret shames and claims of "I hear he's really an asshole" are realized for us in fictional form, we're still left to wonder if we're witnessing truth. Realizing this, "Extras" actually encourages us to become starstruck, to lose focus, since it allows the series more room to blindside us with its superb characterizations and eventually call us on our superficiality. By the time we get to C-list game-show host Les Dennis, here suffering from a breakdown (humorous in how self-consciously pathetic it is), we understand that it shouldn't be all that sporting to rag on celebrities.

A different sort of mystique shrouds film and TV extras. Andy and Maggie are lost in the anonymity of their work (indeed, so often does Maggie wear wigs on the job that it's something of a shock to discover that her real hair is a frizzy blonde mop), and they spend most of their time trying to capture someone's attention, be it a romantic interest, a professional superior, or their literal/figurative viewing audience. They succeed, of course, but often in the worst possible way: a great majority of scenes end with one or both of our heroes slowly exiting frame after committing some major social gaffe, costing them a date or a job. Perhaps it is a reflection of the type of embarrassment comedy that made Ricky Gervais a star with "The Office", but in "Extras", the gaffe itself is somehow less egregious than destroying the pretensions that surround life in Hollywood. In short, the jig is up that the nameless ciphers who pass us by on a daily basis, the window dressing on our lives, are human beings. It's an idea that, when seriously contemplated, becomes a cold shower on our self-centred illusions.

Gervais insists that "Extras" is more about character development than it is any sort of indictment of the entertainment industry, and the series certainly manages that aim with its impossibly quick wit and effortlessly complex situations. That said, it's impossible to not see Gervai battle for "The Office" in Andy's struggle to produce his own work-a-day satire, "When the Whistle Blows". The allegorical frustrations only mount once he finally gets the script to the BBC--the deadpan misfortune in Andy's life doesn't change in the least, and the big star (Patrick Stewart, obsessed with "female nudity") still manages to cast a shadow over it all. In spite of everything, each episode concludes with a return to relative normalcy, the greatest successes or failures culminating in undeterrable dreams that patiently await time in the spotlight. Cat Steven "Tea for the Tillerman" accompanies the closing titles, which represent their own form of wish fulfillment for the characters: While "Andy Millman / Ricky Gervais" and "Maggie Jacobs / Ashley Jensen" are proudly listed at the top, the supporting cast isn't always afforded the same luxury. Andy's comically inept agent Darren Lamb (Merchant) is always credited as "Agent," and Lamb's favourite charge, actor Shaun Williamson, is rarely referred to as anything but "Barry," his character from the soap opera "EastEnders". Gervais and Merchant simultaneously tap into the optimism and cynicism that drive the business: Perhaps the only way to succeed in this mad industry is to surround oneself with the right amount of non-identity--an equation of the roles actors play to the lives they live.

THE DVD
"Extras: The Complete First Season" arrives on DVD in a two-disc set courtesy of HBO that reshuffles the episode order as it appeared on the native BBC/R2 release to reflect the sequence in which the series aired in North America. The 1.78:1, 16x9-enhanced image is consistently sharp if slightly washed-out, as is typical of British television; the DD 2.0 stereo audio is particularly robust, though, with musical interludes coming through with uncommon strength. "Deleted Scenes" and "Outtakes" are presented across both discs alongside corresponding episodes. Those elisions that constitute the former, however funny, were pretty obviously cut because they would've disrupted the flow of the script; the latter, meanwhile, usually have Gervais ruining takes with his boisterous hyena-laughter.

Find slightly more substantial bonus features on Disc Two: "Finding Leo" (10 mins.) is a fascinating home video shot by Merchant in which Gervais scrambles to locate the number for Leonardo DiCaprio's agent after Jude Law cancels an appearance on the show at the last minute (which probably explains the giant Alfie poster in the parting shot of the season finale); and "Extras: The Difficult Second Album" (21 mins.) is a breezy doc that has Gervais and Merchant chronicling the bridge between "The Office" and "Extras" as well as imparting a few anecdotes about working with celebrities...and hilariously hawking "Office"-themed office supplies. An unintentionally goofy promo for various HBO programs (wherein said shows are invaded by their own titles in giant CGI form) and a commercial for "The Office: The Complete Series One and Two" cue up on startup of the first platter. Originally published: April 3, 2007.