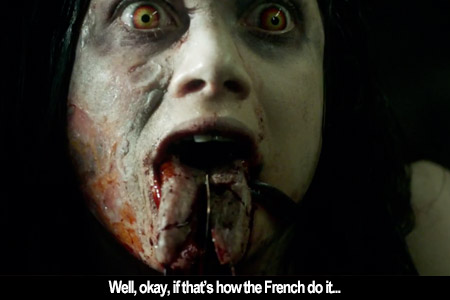 We gather that David is afraid in the same way The Exorcist's Father Karras is afraid: afraid that he's been a bad son to a mother who died asking for him in a mental hospital; afraid that he's been a terrible brother to little sister Mia (Jane Levy), whom he abandoned when things started getting rough at home. He returns as the film opens to find Mia perched on the rusted-out husk of Sam Raimi's '73 Olds Delta 88, behind a rotted-out cabin that Mia and their pals (a nurse, a high-school teacher) have chosen to hold a weekend intervention/detox party. Mia is a junkie, and it's revealed early on that past attempts to make her go cold turkey have resulted in her fleeing back to civilization. This has strengthened their resolve this time around that no matter what happens, they're not letting Mia talk her way out of the woods. It's the first complication of many that confuses, The Shining-like, addiction with supernatural affliction and the DTs with demonic possession, making the early going particularly rough when, after we see what we're pretty sure is demonic shenanigans perpetrated against Mia, we have complete sympathy with her buddies as they doubt her. The notion that Mia is that most unreliable of narrators is exploited smartly by first-timer Alvarez--enough that a nifty reversal at the end propels Evil Dead, with heat, to its conclusion. Enough that a few faint comparisons to some existential themes explored in Black Swan are fair and fascinating.

Even better, though, is the closer look at ideas of love and accountability as our players cheerfully kill their significant others, yet choose to die for their sisters and brothers. There's a conversation about the "beauty myth," as well as a certain exploitation of the male gaze in the mini-melodrama between the teacher (Lou Taylor Pucci) and his nurse girlfriend (Jessica Lucas) and indeed between David and his sweetheart (Elizabeth Blackmore)--the two women disfiguring themselves in front of their partners before being murdered by them. ("David, why are you hurting me?") Consider, too, the events leading up to the girlfriend's death as she descends into the unconscious, "raped" by Mia, who forces cunnilingus before forking her tongue (an image burned into my head by the instantly-notorious red-band trailer) and offering her brother fellatio, and who will later sing David a lullaby taught them by their mother. It's unbelievably fertile ground, this Evil Dead, ripe for excavation for its notions of love, of the dangers of perpetuating ideas of female attractiveness, and of the brutal fallout of rape. And at the end, it's ripe for a conversation about the difference between the people you choose in your life and the people chosen for you. It only helps that Evil Dead is disgusting and fun.

Produced by the Dardenne Brothers, Cristian Mungiu's Beyond the Hills is neither disgusting nor fun, but it too shows how love and responsibility can sometimes metastasize into spiritual battles between good and evil. Too easy to call it "metaphor"--more accurate to recognize that most of the terms we use to describe love ("ecstasy, passion, desire, consummation") have their root in religion, that John Dunne was known to invite his God to ravage him. It's an exorcism movie for everyone who thought, after Mungiu's gruelling abortion buddy-movie 4 Months, 3 Weeks and 2 Days, that this guy should do an exorcism movie, meaning it's emblematic of Romania's new cinema in its methodical patience. It starts at a train station, introducing the women at the centre of its narrative like those archetypal melodramas of women in sexual crisis, Anna Karenina and A Streetcar Named Desire. The visitor is Alina (Christina Flutur); the woman meeting her there is Voichita (Cosmina Stratan); and the two hold their embrace one, two, three beats too long. It's Mungiu's tactic to make us uncomfortable, then curious, then invested in understanding their relationship. They grew up together in an orphanage--and with whatever limited knowledge we have of Romanian orphanages (my own preconceptions are part apocryphal, part Dan Simmons), we craft one story for them. Then when the depth and fervour of Alina's yearning for Voichita is revealed, we suspect another.

Alina's been attempting to lead a secular life in Germany while Voichita, left behind, has moved into an orthodox monastery, where she calls the priest "Papa" and the mother superior "Mama." Voichita has found a family--a euphemism for God and Church--and it's clear, or as clear as anything ever is in Beyond the Hills, that Alina hopes for God and Church in the undefined bliss the two shared in the past. It's a Romanticist film in that sense, this absolute melancholia feeding every question of divinity raised in our pursuit of the sublime. The picture is also very much concerned with the lie of the past, how memory can amplify beauty and allegorize ugliness. In their divorce from one another, Alina has made a shining symbol of what Voichita once represented in the middle of their loneliness, but Voichita has given over her yearning to the promise of a next life that has to be better than this one. Alina pleads, threatens, and when everything fails, she falls into a palsy and finds herself under medical care that is useless in diagnosing her pain. If we take a cue from Paul Thomas Anderson's The Master, the diagnosis is most likely "nostalgia." She's released back into the custody of the nuns and their two metaphorical Fathers (the priest, their god), who, in their own desperation and isolation, decide that what Alina needs is to be exorcised.

What's truly brilliant about Beyond the Hills is that no one is wrong, because no one truly knows the question. The characters, the landscape, where they live, what they're trying to escape physically and spiritually...there's a Sartrean hopelessness to their situation; the film is saturated with that despair. And yet Alina is ferocious in her lust for Voichita, and Voichita is ferocious in her demurrals and her own desire to bring Alina into the comfort of her fold. In the end, as Alina is slowly tortured to death by the best intentions of the only person in the world who loves her, it becomes clear that Beyond the Hills speaks of a more universal existential torment. It's about friendship, yes, and it's about family, of course, but at its essence it's about the fact that neither is enough to provide succour against the emptiness of living and the madness of loving something who will die. It's about the search for eternity--and the irony that such searches always end in the discovery of it. It's about futility, and hope in the face of hopelessness, and immortality in the face of mortality. The discomfort and effectiveness of the films about possession that work is that they clarify we're all vulnerable to--and, in many ways, culpable for--the infestation. When we talk about the victims in pictures like Evil Dead and Beyond the Hills, we're really talking about ourselves.

Alex says "John, CABIN IN THE WOODS is shit."

It's actually one of the better movies I've seen in a long time. It's a shame you eggheads couldn't allow yourselves to enjoy it.

I've been reading Walter's reviews for a long time, but I've never had a problem thinking for myself, unlike some.