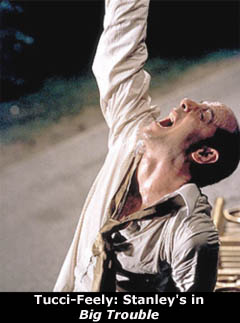 by Walter Chaw My opinion of Dave Barry is that as an essayist, he's no P.J. O'Rourke, and as a novelist, he's no Carl Hiaasen--anyone who agrees to have Harry Anderson play him on a weekly sitcom is begging to have his work re-evaluated through that prism. And yet Barry Sonnenfeld's Big Trouble, the long-delayed (because of 9/11) adaptation of Barry's novel of the same name, is, despite a slow opening featuring just too much of Tim Allen, frenetic and often hilarious--facts likely obscured by an understandable squeamishness in this climate towards mocking airline security and the easy acquisition of weapons of mass destruction.

Essentially a story about resuscitating the relationship between ex-Miami journalist Eliot (Allen) and his son Matt (Ben Foster), Big Trouble is an ensemble crime farce that recalls the best of Hiaasen's work while somehow providing Janeane Garofalo, Jason Lee, Tom Sizemore, and Rene Russo their meatiest comic roles in years. The always-exceptional Stanley Tucci is Herk, a sleazeball in the Down and Out in Beverly Hills vein whose idea of seduction is slurping on the toes of horrified maid Nina (Colombian beauty Sofía Vergara, making her English-language debut). Guilty of embezzling money from the mob, hitman Dennis Farina arrives at Herk's Miami estate coincidental to the appearance of wastoid Puggy (Lee), who appears to have fashioned an entire Zen religion from the consumption of corn chips. Throw in a pair of inept thugs led by a typecast Sizemore and the resulting wacky shenanigans resolve as empty but entertaining all the same.

Big Trouble is a carnival sideshow, its characters varying degrees of desperately freakish for the sake of it with a denouement disingenuously sentimental. The film isn't very high on insight into the human condition and would have been better served by leaving the schmaltz alone. What works is Big Trouble's brevity (it clocks in at under 85 minutes) and its consistently light tone in the face of the Russian mafia, two FBI agents (Omar Epps and Heavy D) gleefully abusing their power, and a gratuitous homage to Dr. Strangelove. The problems of the piece are the same as the problems with Barry's writing: self-conscious and smug lapses. It is the kind of sense of humour that derives from a workman's grasp of pun and entendre and its attendant need to constantly draw attention to itself. Something right up Harry Anderson's alley, come to think of it.

Ultimately, while Big Trouble's images were made uncomfortable in a post-attack America, the film is a harmless screwball farce. It just has the Neil Diamond-like misfortune of being in exactly the wrong place at the wrong time. A different parallax suggests a different perception for a picture that maintains a manic sort of nonsense and ends before overstaying its welcome. Though not wired for every taste (the feral Martha Stewart gets a well-deserved if obvious comeuppance), Big Trouble is more innocuously inane than disgusting and offensive. Considering the state of the Hollywood comedy, that's not bad. Originally published: April 5, 2005.