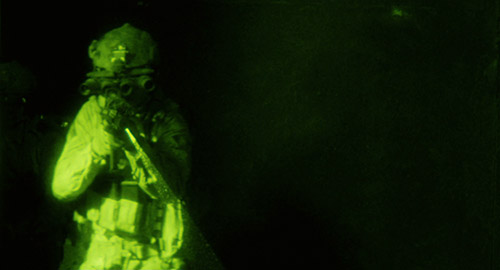 by Angelo Muredda As of this writing, the latest wannabe tastemaker to thumb his nose at Zero Dark Thirty is novelist and professional blowhard Bret Easton Ellis, who tweeted that critics lauding the film "need to admit that they're admiring a morally indefensible movie." With that, Ellis joins an army of self-deputized film writers who've taken issue on moral grounds with Kathryn Bigelow and Mark Boal's treatment of the CIA's decade-spanning manhunt for Osama bin Laden. While Ellis's tasteless tweets about Bigelow's appearance a few weeks back make his word suspect, it's harder to dismiss Glenn Greenwald, the liberal firebrand whose initial survey of early praise for the film (then unseen by him) slammed Bigelow and Boal for glorifying torture. Incensed by the suggestion that crowd-sourcing knowledge about Zero Dark Thirty's representation of torture from the likes of David Edelstein constituted poor form, Greenwald soon saw the picture for himself and insisted that the viewing only confirmed his initial impressions: "[T]o depict X as valuable in enabling the killing of bin Laden is - by definition - to glorify X," he observed, where X meant torture; woe to the "huge numbers of American viewers" about to be "led" down the filmmakers' dim alleyways.

I mention this fracas at the start because I suspect that whether the voices chattering about the film's morality from here on out are as respected as Greenwald's or as, yes, morally dubious as Ellis's, Zero Dark Thirty will for a long time be defined by meta-discussions about intentionality and reception. The tendency in this kind of thinking is to treat the movie as an essay, divining its inscrutable argument through sketchy logical formulas that lead from "depiction" (whatever that entails) to "glorification" (ditto), then pinning the weight of a hypothetical audience's misreading of the gap between those poles on the filmmakers. These commentators are coming from an odd place, skirting as they do from moral indictments of irresponsible artists to jeremiads about the fate of untrained readers in the absence of straightforward authors. Bigelow and Boal can't win: They're either propagandists or something much more sinister--postmodernists. The author is dead; long live the author. By design, then, the film's reticence to behave like a good expository essay and foreground its thesis has destined it to be a lightning rod for ethical debates about the methods used to find and kill bin Laden, not so much for what the movie says as for the way its formal silence on the efficacy of those methods could leave viewers to their own interpretive devices, God help them.

Reading these responses, you'd be forgiven for thinking that Zero Dark Thirty was an auto-piloted political ad rather than a taut procedural shepherded by one of the sharpest living directors of process. "[If] this is high-minded 'art,'" Greenwald opined with all the affected regular Joe philistinism of an NYU-trained Doctor of Laws, "then anything produced by turning on a camera is." Although this characterization of Bigelow as an amateur videographer on the level of the sociopathic teens from Project X is undoubtedly insulting, you could grant that Greenwald has incidentally put his finger on her aesthetic, an unfussy sort of functionalism that, coupled with screenwriter Boal's matter-of-fact dialogue, strives for the unmoved air of investigative journalism. Her steady procession of medium shots hence substitutes for sturdy reportorial prose.

But Bigelow's unostentatious style isn't prosaic for the sake of it. Rather, the mechanical accumulation of data in service of national revenge--and the ugliness it masks--is the subject of her latest, in line with a filmography preoccupied with the procedural ends to which violence is put. Much has already been made of the stark contrast between Zero Dark Thirty's opening shot--a black screen accompanied by the sounds of frantic 911 calls on September 11--and what follows, the brutal water-boarding of high-ranking al-Qaeda member Anmar (Reda Kateb) by frat boy interrogator Dan (Jason Clarke) and junior agent Maya (Jessica Chastain), our eventual protagonist. Far from claiming that the latter scene is unambiguous payback for the former, however, the juxtaposition emphasizes the barbaric actions that undergird fruitless intelligence efforts to bracket the blank chaos of those distress calls with the certainty of bin Laden's dead body or, in its stead, the abused bodies of his surrogates. Much of the useful information that leads to bin Laden is thanks to Maya's handy way around a classified envelope and dartboard, her eerie aptitude at multitasking important phone calls with the video of drone strikes that flickers across her monitor in one uneasy moment. Still, it's the torture scenes that have most resonated with early commentators--in part, I want to suggest, because they're the grotesque foundation of the statistical enterprise Maya is engaged in throughout: finding a paper trail that ends in a corpse.

By that token, Zero Dark Thirty is no more a glorification of torture than Melville's Moby-Dick is a defense of the brutality of whaling or Atwood's Alias Grace is a pamphlet for nineteenth-century pseudo-science. Whether it produces valuable information in Maya's eventual discovery of bin Laden's courier or not (and for the record, it doesn't), torture's presence in the film is a token of an overwhelming lack: the absence of an intelligible and efficacious way of putting the lid on the ghosts of 9/11, which licenses the most humiliating corporeal punishments. What's most troubling about the picture, then, isn't its triumphal progression towards bin Laden, but the eerie hint that the "advanced interrogation techniques" (so the euphemism goes), obsessive data collection, and night raids that comprised that narrative were all inevitable--a powerful military nation's inexact translation of trauma into process, or one system's retaliation against another through paperwork that begins and ends with maimed bodies.

If there's a serious flaw here, it's in Boal's flat characterization of Maya, who has to serve as our audience surrogate as well as an embodiment of both fieldwork gumption and its dark side: single-minded impersonality. Chastain is fine, but there's a dramaturgical archness to the way Maya is penciled in largely through other characters' expository pronouncements about her--"Washington says she's a killer," "It's her against the world"--or by anthropological totems like a coffee mug with "OMG" on it. Though the film's reluctance to editorialize about why the raid on bin Laden's compound is strictly a kill mission is welcome, its depiction of Maya as an origin-less supercomputer, a sort of Will Hunting at the Pentagon, feels calculated, a way of facilitating maximum identification.

That's a problem partly because Zero Dark Thirty is otherwise so aware of the ethical pitfalls of audience surrogacy. Clumsy as Greenwald's attacks proved, his position was always going to be articulated, and for good reason: There's no way to divorce a blow-by-blow account of a nationally-sanctioned kill mission from politics. Whether Bigelow successfully complicates that depiction through her play on perspective is up for debate. She stages the Abbottabad raid as a rigorous first-person shooter, framed at times by night-vision cameras mounted on the SEALS' helmets as they move through a recreation of the cramped hallways and bedrooms where bin Laden, renamed "UBL" and coded "Geronimo" in Navy parlance, was gunned down along with his sons and one daughter-in-law.

Some will see the sheer force of this set-piece as the epitome of fascist wish-fulfillment. Yet that reading is too easy, eschewing both the banality of the execution--the SEALs call out their prospective target's names before firing, in an eerie moment of mutual recognition that recalls Ben Wheatley's Kill List--and the profound alienation of spectators who don't want to go along for the ride. "I got Ibrahim through the door," one SEAL tells his colleague, but of course we know that, having already assumed his perspective. The strength of Zero Dark Thirty lies in the discomfort of that payoff and the coda that follows, where Maya effectively gets the trophy to cap her counter-Jihad, only to be flown back home on another mission, as ambiguous and imprecise as the last one. Originally published: December 20, 2012. 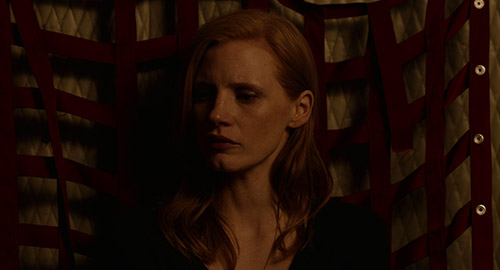 THE BLU-RAY DISC
by Bill Chambers Zero Dark Thirty arrives on Blu-ray from Sony in the United States and eOne in Canada. We received the latter version for review, but I feel confident in saying that technically-speaking, the discs are identical--the major difference is in the selection of startup trailers, which in Canada features titles from both The Weinstein Company (Django Unchained, Silver Linings Playbook, and Killing Them Softly) and Focus Features (The Place Beyond the Pines). (Even the menu screens of the two releases are the same, excepting eOne's inclusion of bilingual text.) The 1.85:1, 1080p transfer reflects a film shot digitally, in 2K, with the ARRI Alexa: The image is cinematic if borderline antiseptic at times; there are traces of noise that might be faux-grain, but they're so few and far between I'm inclined to believe it's an artifact of either the original photography or the Blu-ray compression. Dynamic range plummets during the raid on Bin Laden's compound by vérité design--low-light viewing is definitely advisable. Otherwise, both shadow and fine detail are exemplary, and the deceptively blurry night-vision shots reveal specks of dirt on the lens. Perhaps most crucially, the presentation honours all the multifaceted shades that make up Jessica Chastain's fiery head of hair. The attendant 5.1 DTS-HD MA track is a stunner. Paul N.J. Ottoson's sound editing probably won the Oscar on the strength of the audio montages alone, but the mix is consistently complex without becoming dense. Explosions rock the subwoofer, while gunshots shred the comparative silence to ribbons. Best, neither dialogue nor Alexandre Desplat's score is ever drowned out by the pyrotechnics.

Supplements consist of four featurettes, the first and least substantial of which, "No Small Feat" (4 mins., HD), gets the obligatory praise for director Kathryn Bigelow out of the way. "The Compound" (9 mins., HD) finds screenwriter Mark Boal walking us through the production's reconstruction of Bin Laden's hideout, erected on a lot in Mexico. The set had no breakaway walls or air conditioning, providing authenticity and human discomfort in equal measure. Mock video glitches detract from the earnestness of this piece. "Geared Up" (7 mins., HD) is about the SEALS training that actors like Chris Pratt and Joel Edgerton went through and how the quest for verisimilitude extended to arming them with the actual weapons used by elite special forces. Lastly, the awkwardly-titled "Targeting Jessica Chastain" (5 mins., HD) contains some interesting B-roll of Chastain consulting with Bigelow amid soundbites in which the actress not only compares the role of Maya, positively, to Jodie Foster's in The Silence of the Lambs, but also pre-emptively mourns the comedown from this inevitable career peak. The BD is bundled with DVD and Digital copies of Zero Dark Thirty. 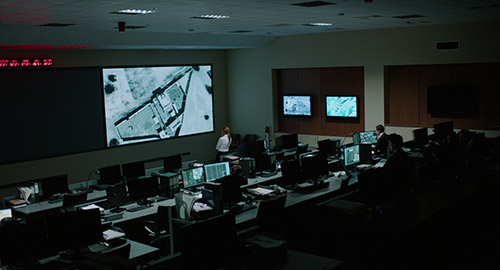 I hope you realize that the BEE Twitter account is a parody account and you just got trolled hard by one of the best writers of all time. He's almost Walter Chaw status.