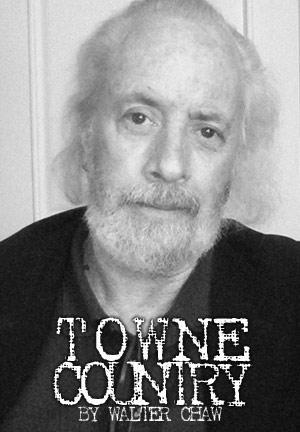 March 19, 2006|Bill posed the question eloquently in his review of Robert Towne's Without Limits of whether Towne actually deserves the "legend" label he's sported since his remarkable trifecta of The Last Detail, Chinatown, and Shampoo. Script doctor extraordinaire, I'd buy (Towne presided over lengthy rewrites of personal faves The Parallax View and Night Moves while inserting key sequences into The Godfather), but doesn't that only bolster the idea that he needs a great collaborator to create truly great work? Then there's his penchant for attaching himself to matinee idol-types, which is fine when they're Jack Nicholson or Warren Beatty, not so fine when it's Tom Cruse. And it's been Tom Cruise since long about Days of Thunder.

Chinatown I've come to think of as Roman Polanski's picture, his trip back to L.A. just three years after the ritual murder of wife Sharon Tate by Charlie's Family--a perception bolstered by the film's ending being Polanski's idea. (Ditto the lack of voiceover and romance, too.) And of course you have Nicholson and Beatty on The Last Detail and Shampoo, respectively, with Hal Ashby helming both. Left to his own devices, Towne's best might be the heavily-compromised Tequila Sunrise--and his worst might be his latest, the noir throwback Ask the Dust. It's not even a noir, if you ask Towne, and there's a mystery there in Towne's disavowal of the genre. Maybe it's sensitivity from decades of getting asked about just one film or, moreover, about his famous reluctance to grant that Polanski's jet-black ending is light-years superior to the pat resolution Towne originally scripted. Perhaps Towne is afraid the jig is up and we'll soon discover that he--like Coppola, come to think of it--is a sentimentalist at heart who, for a while, rode the razored edge with rough company to a glory that's proven elusive to recapture.

I chatted with Mr. Towne as he puffed on a thin cigar, wreathing himself in a scrim of sweet-smelling smoke that I couldn't help but think of as Mephistophelean. Lean, tall, and starting to look his age a little, Towne, when he speaks, still betrays the razor-sharp wit and erudition that's become as much a part of his legend as the Easy Riders/Raging Bulls crowd that produced him. As the interview grew longer and his answers shorter, I suspected that what I believed initially to be canned evasiveness regarding the question of Towne and film noir might have been closer to irritation and, at the bottom of it, discomfort. Yeah, I was uncomfortable, too.

FILM FREAK CENTRAL: What do you remember about working on the episode "The Chameleon" with Robert Duvall on "The Outer Limits"?
ROBERT TOWNE: Oh my God. (laughs) It was tough. I remember having to rewrite the script because of censorship at that time. The original story, there was a guy who has to insinuate himself into a strange species by allowing his DNA to be altered--to have the essence of him changed from something very brutal and controlled to something that was just brutal. Alien and brutal but maybe not so alien. But I started the script with these aliens up in the mountains, finding a park ranger and taking him apart, system-by-system and then trying to put him back together again.

Too graphic?
No, I think the long and the short of it was that when it finally comes down and we learn what these aliens were, we find out that they were just children. But, uh, censorship at that time said that you just absolutely couldn't do anything involving children and so we had to go from there. I don't remember what I changed it to. Duvall is just excellent in it.

Snow in The Last Detail and as the grace note in the original screenplay for The Two Jakes.
That was shot in Toronto and was just an extension of the scene as it was written--no intentionality behind that, just something that happened. The beauty of it was that the actors didn't have to act because it was so goddamned cold.

That ending always the ending to The Last Detail?
It was the ending that I wrote, yes. Hal Ashby was kind of a saint--he was a Chauncey Gardener, you know, very kind and patient and wise. I can't think of a better collaborator for those films.

Talk to me, then, about natural elements and historical touchstones in general in your films.
I think that those are the things that you can uniquely do with film that are difficult to do anywhere else: they can bring a picture to life, give it a natural and historical context and make you feel that everything else is suddenly credible. You click on period through those details and suddenly there's this feeling of reality that maybe your film didn't have before. Life. That's what it's all about, and whatever you can do to imbue your film with that kind of life, you have to do.

Are they metaphors as well?
Well, they can be.

You're credited with revising film noir in a way, and now you return with Ask the Dust, which plays almost like a parody. Why film noir, then, and why now?
Somebody called this a "sunny" film noir and I don't, I don't... Noir as a genre always was a story about a protagonist with a deeply flawed nature who was subject to one of the deadly vices, whether it be greed or lust or jealousy, or all three, inevitably drawn to a dangerous female character set up at a centre of a moral web like a black widow who is gunning for a fatal reunion. Double Indemnity, for instance, is a classic example. But Chinatown, the hero's flawed but the heroine is virtuous so there was that variation. And with this movie, the character's again flawed, but I reject the categorization of it as film noir because there's really none of the rest of it. It's a love story.

But the voiceover, the language, the unravelling of character and era, the subtext of societal decay...
It's a love story.

Why the vilification of marijuana in Ask the Dust?
Because I wanted to preserve the prejudices of the time--I didn't want to update it in that way. From her point of view, the first thing he says about it is, "That Mexican shit will get you deported," so it's not the marijuana so much as the Mexican--so in her mind and in my mind, it's not that it's bad, but that it's Mexican. I wanted to relate it to that prejudice.

And the conspicuous pick-ups of coinage?
Well, money is so important to the characters, you know, I saw it as sort of a third character. That becomes very vital, very important to the feeling of the fabric of the piece: the power of fifteen cents and then [Donald Sutherland's] character saying, "I can't give you hard cash."

At what point did you come around to Polanski's way of thinking regarding the ending of Chinatown?
Well, at the time I wrote the damned thing, it was there, I just said that it wasn't any good but he shot it and that was that. The passage of time, I've come to see it as the right choice.

Staying with noir, Mission: Impossible II takes its basic narrative structure from Notorious and you've been attached to a remake of Dial M for Murder.
I don't know if I'm doing Dial M next or not. In Hitchcock's best movies there is this remarkable attention to time and place. He got more fanciful as he got older, but you look at The Lady Vanishes or The 39 Steps and the settings of that time added immeasurably to our enjoyment of the melodrama. They bound his films to a certain reality back then. I don't know how much I appreciated it, or used it.

How much were you involved in the rewriting of The Parallax View?
Well, that was during the strike and I was rewriting everyday so that was the extent that I was involved in it: extensively.

Why do you attach yourself to stars [like Jack Nicholson, Warren Beatty, Tom Cruise]?
First: they're all good actors. Secondly, they're all movie stars. That means two things: that whatever it meant, particularly in the Seventies, you could be even bolder in the movies because you were backed by movie stars that were invested in the movie getting made. As long as they were on board, the film would get done. Secondly, it meant that you were freed to write characters that weren't sympathetic...

Meaning that these stars don't mind uglifying their image?
That, but more that the charm of the actors would overcome a lot of the darkness you could write for them--get you through some of the bumpier aspects of their characters.

And why do you think that they want to work with you?
Well, um, I'm reminded of something that Warren reminded me of about the time of Bonnie & Clyde. There was this French director that I forget the name of but he was kind of chic and he turned to me and asked, "Exactly what is it you do?" And there was this sort of Gallic arrogance behind it, seemingly good-natured, and I just looked at him and I guess I was pissed off at him and I said, "I help get movies made." And I think one way or another it's evident to those who work with me that as a writer, a director, a friend, as somebody's there that's very anxious to get the movie made.

Why did Personal Best flop at the time of its release?
There was a significant critical response at the time, positive and negative, so I can't say it was that, and there was a fight with the studio that surely dampened its success. But time has caught up with it and I think vindicated it. Shampoo, too: very dark, very ambitious movie.

Jay Sebring, the guy upon whose life Shampoo is based in part, was killed in the same spree that took Sharon Tate's life. Describe for me being at the epicentre of Helter Skelter.
It was the ending (snaps fingers). There were so many, but that was the end of the Sixties. The door was closed, the curtain dropped, and nothing and no one was ever the same.

How does film reflect our culture of paranoia now differently than it did in the Seventies?
I think the virus of terrorism being unleashed not having a specific country. Avian flu, the two kind of blend into one kind of generalized fear that no place in the world is safe: gives rise to a lot of these supernatural, science-fiction stories about terrible dark forces. So we seek in a lot of ways supernatural explanations or refuge, you know, even the Harry Potter movies, you're dealing with some effort to recast the gloom into good and evil instead of just despair.

Can you draw any lines to the Seventies?
Audiences and filmmakers were really locked at the hip. There was a concurrent rise of the counterculture: a hunger on both sides for something new and a hunger for action and theme, antiestablishment nature of film and filmmaking, spoke to a wide audience. Today, audiences are a lot more Balkanized. There's no clear cut enemy for filmmakers to hone in on so it's all scattered, along with the audience. More, too, it's a lot easier to offend audiences now than it was then, but I guess that goes hand in hand with the ways that movies have become less daring in time with the audience's loss of nerve.

Do you miss that specific heel to the back?
Well, yeah. But history's moved on. I miss the world back then, I miss that feeling that we were working for something against something, whatever it was.