The Filmmaker with Four Syllables in Her Last Name: FFC Interviews Lisa Cholodenko 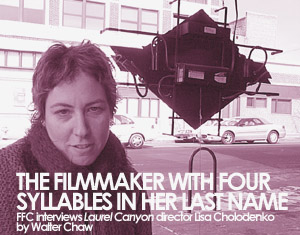 March 23, 2003|She looks a little like the subject of one of her own films: vaguely Bohemian, artsy, with the air of one invested in the secretive, slightly disassociating practice of creation. I met Lisa Cholodenko at Denver's Hornet restaurant, just across the street from the Landmark Mayan theatre on a clear, warm Colorado winter's afternoon. In town for an advance screening of her new film Laurel Canyon that took place the night before, this day found her badly in need of a quick nosh after a mad morning with the florid bouquet of the Denver media (badly in need of pruning so that the live ones can flourish). Ms. Cholodenko speaks succinctly and carefully--she can seem a little defensive at times, the source of her discomfort possibly having something to do with the speed with which her work has been politicized along sexual (lesbian) lines. But over two orders of the restaurant's lovely Mayan Salad (get it with the dressing on the side), I found Ms. Cholodenko to be curious and warm as we dished a little on the ultimate failure of The Hours and the essentialness of New Order's "Brotherhood" album (and Antonia Bird's Ravenous). I asked her how she got her start as an editing assistant on John Singleton's Boyz N the Hood.

LISA CHOLODENKO: I was an apprentice editor--my oldest friend in L.A.'s sister-in-law worked at Columbia, involved in bringing that project to reality, and so it was sort of a "knew somebody who knew somebody" sort of thing, you know. It was a big break--I had, the summer before that, attended a film program at Stanford and made a short film there, something that no one's seen on 16mm, so I had learned the rudiments of editing, but you know, Boyz was my first job in the industry.

FILM FREAK CENTRAL: Did you work very much directly with Singleton?
Yeah, John was around, he was around. He was really young at the time, sorta just hangin' out with his GameBoy basically. He was a really sweet guy.

Before eventually going to film school, you also worked on The Lawnmower Man and Used People--two very different films and, in the case of the latter, a picture with a distinguished cast. Any influences?
Well, I met everybody in the casts of these films, but didn't have any real meaningful interaction with many of them. In the case of Used People, I think the most interesting thing about that experience was meeting the director, Beeban Kidron, who was, of course, a young female director. It was a little like meeting John Singleton, a minority director, so that really fed into the energy that I needed to motivate myself to go back to school.

Once in Columbia University's graduate program, you made two films--the second of which, The Dinner Party, was pretty widely seen. Your mentor there was Milos Forman.
My third semester at Columbia, I was matched up with Milos. He'd taught at Columbia a couple of years prior and still wanted to be involved with film school so he offered himself up as a mentor and I happened to get paired up with him. I was really a great admirer of his work--I had just so much respect for him. It was really scary meeting him--he was casting The People Vs. Larry Flynt at the time, but he really admired my script for High Art and encouraged me to develop it. While I was at Columbia, I had done some work for one of my producing professors [Jeffrey Levy-Hinte] who's a pretty well known fellow in the industry. At the time he was making a transition from being an editor (with amazing work on Leon Gast's When We Were Kings -Ed.) into being a producer and because he liked the script for High Art so well, we sort of went ahead from there.

I read that you hadn't seen The Breakfast Club when you cast Ally Sheedy in High Art. What were you watching in the Eighties instead?
I was living in northern California, went to school at San Francisco State, so I was really getting into foreign films at that time--French New Wave, and Fassbinder, and in retrospect it was certainly an interesting ascetic. But you know (laughs), I've seen it all since including The Breakfast Club several times.

High Art's addictive subtexts reminded me a great deal of Dead Ringers--can you indulge me with your influences?
(laughs) Well, I was really influenced by the film of the American early-Seventies. Five Easy Pieces, The Graduate, Klute...The last scene of Laurel Canyon pays homage to The Graduate. The temperature of films was just radically different then. I hope my films will follow in that--in that viable tradition.

Your films to me are in large part about loneliness--a scene in particular from Laurel Canyon with the old man renting his home. Can you comment on that theme and how the scene evolved?
Mostly it was there to serve the plot--this charming little house in the suburbs, you know, the answer to all their immediate problems. I felt like to drive the point home I'd have the landlord being this guy who identifies with this woman--who sort of understands what's happening with her. The scene's meant to sort of spook her--sort of banal.

I disagree--I mean, here's a man who's opposite of the Beckinsale character, particularly in his line that it wasn't he who was lonesome, but the son who wanted him to live with him... The scene feels like the central statement of the film: misunderstanding and isolation--even from the self.
Lonely because they haven't figured out how to connect in an honest way. I wanted this to be a film about the effort to deal with loneliness by being true to yourself.

How does the sexual ambiguity of your protagonists tie in?
Maybe it's an idealistic position--but I think in both films, neither character is questing for sexual identity but as in the case of High Art, intimacy--and in the case of Laurel Canyon, experience. In neither film do I speak about sexual preference so much as the importance of human experience.

You've worked in television on "Six Feet Under" and "Homicide"--compare the disciplines.
Technically speaking, these are television series that are shot on film so that part's fairly similar, but in TV you have actors who've been inhabiting these characters year-in, year-out so there's a lot of shorthand. They pretty much direct themselves--they know where their characters are going to go better than you do, you know, so your job is almost more managerial. You want aesthetic soundness.

How did you assemble the cast for Laurel Canyon?
Everyone came a different way. I cast Nivola and McElhone auditioned. Allesandro actually brought in his guitar and played for me. We didn't have a long rehearsal process, the budget just wouldn't allow that, but they were all pros--they all came ready to rock. Frances--I put out some interest in her, said I was interested in her and sent the script. We had lunch, talked, and it was obvious right away that she was meant to be that part.

Where did the music come from?
I got the music from Mark Linkous.

"Sparklehorse"?
Right. Mark had written the song we used as sort of the "climax" song "Shade and Honey" and wasn't planning to record it so we were able to get it for the movie. Allesandro went into the studio with [Lou Barlow and John Davis] the guys from Folk Implosion, who played the band and this producer, Mickey Petralia--who's also in the movie--and they did the song in a few takes. I modeled Frances's character after some producers like that--like Daniel Lanois, for instance--and I was looking for that authenticity in the home studio, spare and stripped down process.

What's next?
I believe it's going to be an adaptation of a Dorothy Allison book called Cave Dweller and Kyra Sedgwick is attached to it. Sort of a new frontier for me because I won't have anything to do with the writing of it.

You're glad?
Oh yeah, it's exciting to just be able to throw yourself into the directing aspect of it and not have to hole yourself away for years with a script just hacking away at it. On Laurel Canyon and High Art, I would say that they're about 95% strictly script and about 5% improv. The improv's been great, don't get me wrong--it really lets you know that you've chosen the right people, but I've always been pretty bound to the script. It's been hard to separate the writing from the directing is what I'm trying to say so I'm looking forward to Cave Dweller as something entirely new for me.

I want to close by asking you about the "toe hug."
I always saw the film end with that visual dynamic while she's making amends--him in the pool and looking up at her, and that physical relationship, it sort of suggested itself. Eccentric, but trying.