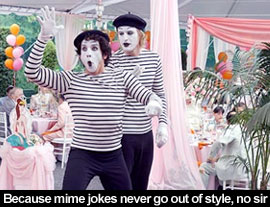 by Walter Chaw The problems with Todd Phillips's lifeless and auto-consumptive Starsky & Hutch begin with a lack of imagination and end with a lack of pace. The one thing a comedy can't be is boring, and Starsky & Hutch is that in spades, banking far too much on the inherent hilarity of the '70s (its title declares "Bay City. The Seventies" like a plot outline and mission statement) while depending upon Owen Wilson and Ben Stiller to keep doing the same thing they've been doing for what's beginning to seem like decades. If I never see Stiller do a silly dance again, not to mention engage in a dance-off, it'll be too soon. Hope/Crosby for an age of lowered expectations, both are talented artists when they're not just cashing a paycheck. The danger is that a few more like Starsky & Hutch and The Royal Tenenbaums will begin to seem like a fluke.

Starsky (Stiller) is a by-the-books cop partnered with Hutch (Wilson), a laconic slacker. In between mugging for the camera and reciting flat dialogue with the stunned cadence of the damned, the boys try to collar dealer Reese (Vince Vaughn) and his low class mistress Kitty (a permanently typecast Juliette Lewis). Druggie underworld informant Huggy Bear (a permanently typecast Snoop Dogg) makes a couple of unfunny appearances that serve mainly to mock the rapper's marijuana-smoking, convicted-murdering persona, and the truism that the best parts are in the trailers proves astonishingly prescient. Phillips pays obvious homage to The Godfather, Easy Rider, Saturday Night Fever, and Dirty Harry, makes a semi-sly reference to insidious pod-child manifesto "Free To Be You and Me" (Owen Wilson meanwhile performs original-Hutch David Soul's schlock classic "Don't Give Up On Us Baby"), and, in the only thing approaching clever, casts Fred "The Hammer" Williamson as the duo's cranky police captain. There is nary a chuckle in the whole, exhausted shooting match aside from a fairly amusing musical montage set to Eric Clapton's "Cocaine" and a sequence involving Will Ferrell's disturbing sexuality.

Aping the caper/crack-up formula of Fletch, what Starsky & Hutch does best is remind that Fletch is a terrible movie that has somehow found a cult following among those water-cooler wonks who mistake being able to recite obnoxious movies in their entirety for charm. The picture attempts to walk the impossible line between parodying something already made ironic by the passage of time and paying reverent tribute to its inflated memory. At least with S.W.A.T., the filmmakers make a decision; Starsky & Hutch doesn't know how it feels about its source, so it blindly throws a lot of stultifying garbage at the wall. Incapable of finding a voice, Phillips cuts to two girls kissing, to Stiller resurrecting one of his characters from "The Ben Stiller Show", to the increasingly tiresome Wilson drowning in a sea of his slow-leaking doublespeak, and so on.

A late appearance by series stars Soul and Paul Michael Glaser highlights the picture's central failing--at that moment, Starsky & Hutch is propelled into the stratum of the meta-surreal: not funny, not poignant, just disturbingly reliant on a conversance and affection for a television show that most of us remember as being about a red Grand Turino if we remember it at all. Satire loses its bite when its subject is anonymous, and the joke--most of the jokes--will be lost on director Phillips's 13-18 year-old male demographic. (The rest will be tedious to people who are actually capable of nostalgia.) Trying to satisfy everyone, Starsky & Hutch irritates everyone. When Starsky & Hutch runs out of ways to make fun of afros and Seventies fashion and technology, it resorts to leering at bimbos (enter: Amy Smart and Carmen Electra), making what starts out as just harmless junk into callow, obvious junk. Destined to be forgotten even as it's happening, Starsky & Hutch and others like it get away with it because they're the filmic equivalent of a roofie: you're sure that something happened while you were out, but damned if you know what it was. Originally published: March 5, 2004.