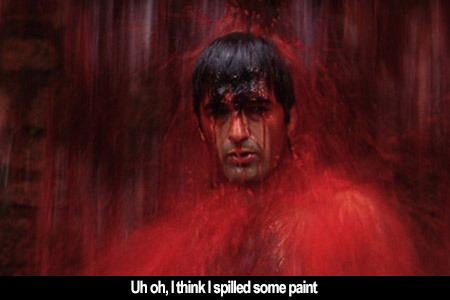 by Angelo Muredda In his 1975 survey of trends in Canadian literature, Northrop Frye famously diagnosed the national character as paranoiac, fraught with nightmares about being invaded by the outside world. That so-called garrison mentality, Frye offered, meant early white Canadian settlers bonded together against both the malevolent nature past their forts and the more generalized outside threats it represented--shutting their doors to anyone who seemed the slightest bit unneighbourly. Although Frye had a very specific community in mind, it's hard not to see it reflected in the gated neighbourhood of critic-turned-filmmaker Kleber Mendonça Filho's Neighbouring Sounds, a conclave of middle-class northern Brazilian condo-dwellers who define themselves by the riffraff they discard, whether car-stereo thieves or sleeping doormen. Part-Hanekian surveillance thriller and part-Altmanesque ensemble of overlapping voices, it's one of the most assured debut features to land in years, the sort of fully-formed high-concept work you expect after a couple of interesting misfires.

The snappishness of Filho's ensemble--who tentatively share a street in the south of Recife, one of Brazil's highest-density metropolitan areas--is all the more alarming because there isn't a grotesque among them. The nominal lead is João (Gustavo Jahn), a real estate agent trying to clear off a condo that's recently seen its tenant jump to her death, presumably in front of the lower-class neighbour kid whose soccer ball is always getting stuck in someone's balcony. Despite the patronizing way he wears his wealth, sympathizing with the maid on account of he, too, once had to take a job as a student, João is our most natural audience surrogate, especially next to high-strung, new-moneyed mother Bia (Maeve Jinkings), who divvies up her day conceiving of ways to incapacitate the neighbour's barking guard dog, clandestinely smoking pot in the laundry room (then vacuuming the smoke out of her mouth), and shuttling her kids off to English and Mandarin classes. Bia isn't exactly sympathetic, but she's recognizable as more than a type, someone who's trying to square her goal for her children to become citizens of the world with her natural misanthropy. Even the community's silver-haired patriarch Francisco (W.J. Solha), a smiling tyrant who banally informs a visiting security start-up that he owns pretty well the entire neighbourhood, is just a man doing his work on some level, keeping his family in line.

It's the security team, a group of strangers entering an already guarded community with the promise of even more scrupulous surveillance via some truly low-tech digital cameras, that snaps Filho's seemingly shaggy work into narrative and thematic focus. Like a more stately version of his onscreen doppelgängers, Filho's camera follows these neighbours with spooky precision in widescreen compositions that often give way to startling close-ups, tracing their steps as they follow the sounds that pollute their space to the source. There's a studied playfulness to the way Filho turns these diegetic signs of people inhabiting their shared environment--a symphony of mechanical noises ranging from the cool glide of roller blades on pavement to the deep rumble of Bia's washing machine, obliterating everything around it--into a percussive soundtrack.

Impressive as his design is, there's a worrying hint of Alejandro González Iñárritu to Filho's final twist, an unfortunate turn given how studiously the rest of the film rejects the Iñárritu school of crisscrossing narrative that has poisoned ensemble filmmaking since Amores Perros. It isn't that this late reveal, which also resembles the cryptic historical guilt-mongering of Haneke's Caché, is a cheat: There are plenty of hints throughout of a racially-coded underclass ready to storm the gates of this cushy neighbourhood, from the unidentified black teen who, in one moment straight out of a slasher, races past the camera and out of the apartment he's been squatting in to the uncannily-staged nightmare of Bia's well-heeled daughter, who dreams of a mass of dark young bodies scaling her apartment's fence to crowd around under her window like hungry wolves. But those moments are faithful renditions of the garrison mentality run wild, where the ending is more of an exclamation point at the end of a finely-wrought sentence that doesn't need it.

I agree about the ending. It was simultaneously unexpected in that it stuck out from the rest of the film and totally unsurprising as many other movies have prepared us for exactly this kind of ending. It was a letdown. Otherwise this was my favorite film from last year.