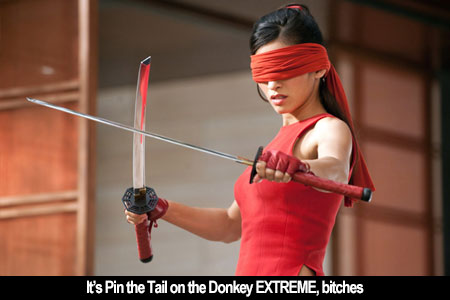 by Angelo Muredda While it's easy to snicker at a title sequence that boasts of "Characters by Hasbro," G.I. Joe: Retaliation (hereafter Retaliation) is the kind of movie you root for. After the banality of predecessor Stephen Sommers, John M. Chu is an inspired choice of director. This is a guy who's made his name by bringing elegance and agility to his two attempts at the surprisingly bullet-proof Step Up franchise. There was reason enough, then, to hope his preference for long takes and earnest interest in bodies in motion would translate to a franchise inspired by a line of action figures. After all, such baubles are nothing if not fetish objects, their biceps studied by the faithful with a mad love usually reserved for dancers, matinee idols, and wrestlers. What better meeting of the three than a project steered by the director of dance films and anchored by Channing Tatum and Dwayne Johnson, née The Rock?

Though it was originally slotted for last summer, early word had it that Retaliation was delayed to beef up Tatum's anemic presence (in the shadow of Magic Mike) and to make room for a 3-D conversion, after Paramount got wise to the importance of the format in securing foreign screens and box-office. Sparing the obvious jokes about the script's dimensionality, these revisions are our handiest early warnings that this is filmmaking-by-committee, regardless of who's nominally in charge. Tatum is around more than the first trailer and Duke-less poster suggested he would be, but in an oddly spectral sort of way. His scenes, which might as well announce themselves by Godardian intertitle ("New Material"), are portentous beyond belief: Pray for anyone this devoted to giving piggyback rides to his best friend's children, provided he has no ulterior motives. As for the 3-D, Retaliation feels like an evolutionary setback for Chu, who already handled this bugaboo in Step Up 3D. The best that can be said of its sloppy use here is that at least Chu didn't know he was framing for the z-axis when he conceived of an early sequence that could go down as the apotheosis of the format's problems: a glacial pan around a board meeting that sees a succession of men in suits obscuring our view of the speaker like an elaborate riff on Eyes Wide Shut's CGI cock-blockers.

One fixates on these details not out of spite but out of generosity--a willingness to engage with a text that comes apart in a series of nondescript shootouts and reams of exposition. The plot has something to do with a shapeshifting COBRA lieutenant named Zartan, who's assumed the identity of the pro-disarmament U.S. President (Jonathan Pryce) in order to launch a military strike on the Joes for the usual reasons of covert leaders of dark organizations. Led by Roadblock (Johnson) and Jaye (Adrienne Palicki), the survivors gather the fallen's dog tags and go on a wilderness quest for their namesake, Joseph Colton (Bruce Willis), a former General who spends his retirement in an immaculate white house lined with considerably more guns than there are hands to hold them. What any of this has to do with the thwarted bildungsroman of Storm Shadow (Byung-hun Lee), a dark ninja framed for murder and held in cryo-storage, is best left to RZA as Blind Assassin, a sansei who drops in for vaguely Japanese-accented monologues that serve no purpose except to introduce new characters who won't amount to much.

There are moments of grace in all this plotting, enough to wish that Retaliation ran a taut 90 minutes rather than just shy of two hours. The standout sequence, good enough to be its own short film, features Blind Master's team passing a duffel bag-gagged Storm Shadow along a zipline between mountain peaks, keeping him away from their ninja rivals. Just as good: a throwaway gag wherein a number of world leaders coolly throw the briefcases containing their nuclear codes down on a conference table, as if to incite a dance-off. Both moments have the dumb poetry of an expertly-choreographed battle between teams of equals, the type of thing you look for in a movie based on toys.

Those scenes are special because we can follow their spatial as well as their narrative dynamics. Too often Retaliation wallows in the mud, in haphazardly-cut shootouts that squander the cartoonishly-exaggerated bodies of the cast, including Johnson at the height of his beefcakery. That incoherence extends to its politics: dunderheaded as they are throughout, they're never as confused as when poor Jaye--rechristened Brenda by Colton, because why not?--gives an earnest account of not being taken seriously by her Captain father, which we see entirely through the perspective of a grunt colleague who's watching her undress in the distorted reflection of a TV. Speaking out the side of its mouth, Retaliation gets to be progressive even as it advances the most conservative arguments about women and the military. Zombieland screenwriters Rhett Reese and Paul Wernick invest the slightest hint of wit wherever they can (Pryce's paper President brags about getting to meet Bono at one point), and that makes things easier on the actors, who are otherwise excreting the most humourless pulp. But it's the wrong approach for intrinsically jingoistic material that would benefit from the fascist mayhem and toxic sunsets of, say, Michael Bay, who at least tends to know what sort of movie he's making.