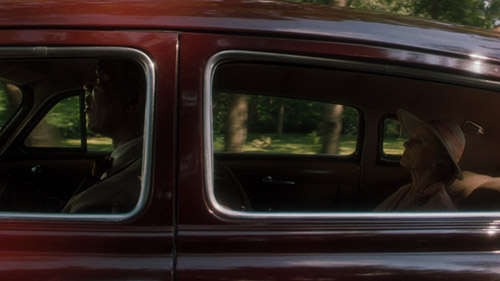 by Walter Chaw The heart-warming story of how a bitter old Jewess learns to not be such a bitch to a patient Negro driver in an idyllic pre-integration South, Bruce Beresford's Driving Miss Daisy, released the same year as other such landmark films about race as Ferris Bueller's Black Civil War Regiment and Do the Right Thing, discusses how forty-one years of forced companionship can overcome even the deepest-seated prejudices and resentments. Or, at least, dementia can. We meet Ms. Daisy (Jessica Tandy) as she crashes her car, and we meet Hoke (Morgan Freeman) when he begs Miss Daisy's son Boolie (Dan Aykroyd) for a job as her chauffeur--meaning they're both prisoners of circumstance, see? Meaning this is an unlikely but no less racially naïve remake of Stanley Kramer's embarrassing melodrama The Defiant Ones, scored by Hans Zimmer with outtakes from his synth-heavy, bullshit-rich Rain Man score, all teddy bears humping and building music boxes and shit. Meaning, essentially, that we are to believe there is no substantive difference between a wealthy white woman needing to hire a driver and a destitute black man looking for work in 1948 Atlanta. My favourite scene is either the one where Hoke asks Miss Daisy's permission to make water, or the one where Hoke says something and Miss Daisy tells him to "be still."

The most surprising thing about Driving Miss Daisy now, some twenty-four years later, is that as it jumps forward decade-by-decade, the age makeup is considerably better than any of the crap used in last year's Hitchcock or the also-post-racial and deeply sensitive, time-skipping Cloud Atlas. Did I mention that Hoke is illiterate? You could argue that this represents a real cross-section of Southern attitudes and how they evolved through the Civil Rights movement and into the modern day, or you could see it as simpering, middlebrow-pleasing pabulum meant to assure its middle-class elderly white audience that it's not racist and appreciates good, Oscar-feted movies about black folk (written/directed/produced by white folks) based on Pulitzer Prize-winning plays (by white folks). It's 1989's Beasts of the Southern Wild, in other words, and if we're talking progress, we can at least say that although nominated for it and more, at least Beasts didn't win Best Picture. Understand, I'm not saying it's impossible for white folks to write about black folks, I'm saying that when the result is Driving Miss Daisy or Beasts of the Southern Wild or The Blind Side or The Green Mile, the fact that its creators are white folks is as good a place to start pointing fingers as any.

Therefore, because it couldn't possibly be about a bitter old Jewess learning to tolerate her obsequious Tom, here are two things Driving Miss Daisy might be about: 1) It's a metaphor for how the Old Hollywood elite (the Jews) treat African-Americans in the same way that Danny the Dog/Unleashed is about how American film audiences treat Asian actors; 2), and more subversively, no matter how much time passes, minorities in popular entertainment will forever be viewed by the majority as servile, helpless/helpful ciphers defined by their relationship to their master(s). There's something existential about both approaches to the piece, but neither read is extant in the text so much as possible through objective consideration of the fact of the text. Modern reads of Driving Miss Daisy have actually begun by decrying the backwards racial attitudes of 1989--I'd offer that of all its crimes, having dated racial attitudes is not one of them. The picture's popularity is a keen indictment of our culture. Frankly, we haven't come very far.

THE BLU-RAY DISC
Warner brings their unexpected cash cow to anachronistic HiDef in a 1.78:1, 1080p/AVC-encoded transfer that looks diffuse and dim, especially for something from this period--not all of it, perhaps, attributable to the shooting style or the heavy-handed seasonal metaphor that runs through the narrative and visual schema. (It's possible to know what they're up to and still hate it, right?) The 2.0 DTS HD-MA track uses the non-centre speakers mainly to transmit what is possibly Zimmer's worst score. It's so bad, I spent most of the time thinking it was James Horner. An attendant yakker stitches together non-scene-specific snippets from director Beresford, producer Lili Zanuck, and playwright/screenwriter Alfred Uhry, who reveals that the story was based on his grandmother and her relationship to her driver and, later, sort of defends not telling anything about Hoke's life as not believing that his life was as dramatically interesting as Hoke and Daisy's life together. Mmmm, yes. Zanuck, meanwhile, demonstrates a peculiar tone-deafness unique to producers in talking about scouting locations and how she was more than happy, always, to accommodate extras and Beresford's needs. All join in praising Tandy in the way we tend to speak kindly of old people. It's horribly condescending in the same way the character of Boolie's wife (Patti Lupone) is treated throughout, so...if we must argue that the film is racist, may we at least not argue that it's misogynistic?

"Miss Daisy's Journey from Stage to Screen" (19 mins., SD) is redundant after the commentary track, though a minute is spared for the great makeup. "Jessica Tandy: Theater Legend to Screen Star" (7 mins., SD) is hagiography through-and-through--and I'm still waiting to see footage of her legendary turn as Blanche in "Streetcar". A "Vintage Featurette" (6 mins., SD) is a complete waste of life, as is the original theatrical trailer (2 mins., SD). "Things Are Changing: The Worlds of Hoke and Miss Daisy" (30 mins., HD) features Spike Lee...no, just kidding, it's a new featurette in which Uhry says he wanted "to write about prejudice" and Freeman won't admit that he'd likely not do this movie were it offered to him at this point in his career. Also contributing to the conversation are various Jewish and Black leaders, who remember how things were tough in the South. A 30-page booklet in the packaging is basically fancy cast/crew biographies.