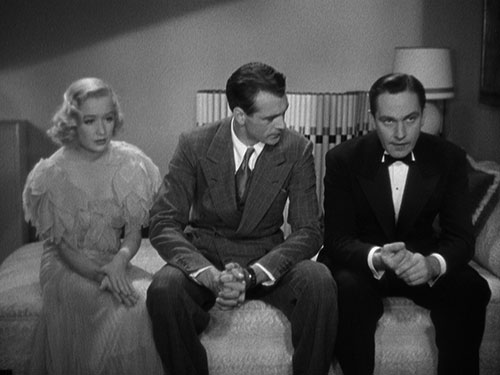 by Walter Chaw The impulse to call the work of Ernst Lubitsch "frothy" and "bubbly" and otherwise insubstantial (a practice excoriated, rightfully so, by film scholar William Paul on Criterion's Blu-ray release of Design for Living) obscures the fact that none of Lubitsch's romantic masterpieces would carry any kind of resonance without an essential heart of darkness and decay. The oft-invoked "Lubitsch Touch"--that well-circulated anecdote that Billy Wilder hung the words "What Would Lubitsch Do" above his office door--suggests to me the wellspring of the asshole element in Wilder's works: the idea that Wilder was just Hitchcock undercover, with Lubitsch influencing both directors in ways obvious and not so and not in terms of a "light" touch so much as a decidedly bitter one. Take my favourite Lubitsch film, Trouble in Paradise, which begins with a trash barge in the middle of the night in a Venice we don't see again until Nicolas Roeg's Don't Look Now. The picture proceeds to document the love affair between two professional thieves and the innocent woman who falls victim to them. In that, there's a direct reference to hated President Hoover's deep-in-the-Depression platitude that "prosperity is right around the corner," offered in piercing irony for a cash-strapped audience for whom the theatre had most likely just lowered their admission to a dime. The "Lubitsch Touch," indeed: edged and between the ribs before you know it's being brandished.

Applied to the full-on, robust sex comedy Design for Living, Lubitsch's touch is felt in lines like, "A bicycle seat would be hard on Lady Godiva's historical assets," and, "It was good to hear some of the names you called me--I haven't heard them since I left mother and father." The picture details a ménage a trois involving industrial artist Gilda (Trouble in Paradise's Miriam Hopkins), struggling painter George (Gary Cooper), and Gary's aspiring playwright buddy Tom (Fredric March), the trio deciding out of mutual affection to live together in Bohemian Paris and focus their attention on the boys' careers to the exclusion of sex. Gilda declares herself their mother, making her sackless admirer Max (Edward Horton) the father from whom George and Tom will Oedipally steal mom's affections. Of course it ends in sex (both moments of seduction are immensely erotic--the first especially, as Gilda reclines on a bed and sighs, "It's true we have a gentlemen's agreement, but unfortunately I am no gentleman."), and of course it ends on a wedding day, as Gilda decides on Max when she can't make up her mind. The second-best moment of the film is when George and Tom size up Max, going so far as to peer at his crotch, and declare that of the three choices, Max is most decidedly "vegetable." But because this is Ernst Lubitsch, when Gilda can't decide between George and Gary, she ultimately chooses both--meaning that while it's sort of the precursor to Bull Durham, with a matronly/sexually-voracious woman tutoring the opposite sex in their professions, it's at the end more courageous than Bull Durham because it allows the woman to continue to be sexually predacious at the expense of two men powerless against her.

Design For Living agrees: "Let's not be delicate," Tom pleas at one point. "Let's be crude and objectionable." It's not daring for its time, it's daring in any time, enough so that movies its equal in terms of sexual frankness and sophistication are still exceedingly rare. A predictor of the screwball comedies that would proliferate the '30s into the '40s, Design For Living is indicated by sharp, overlapping dialogue and long silent sequences where Lubitsch builds character through pantomime and brilliant timing. Take the opening sequence on a train, where Gilda draws the boys while they sleep and then the boys steal her sketchbook, flipping through it while she naps--only to find caricatures of themselves, ridiculous and vulnerable, on the last page. The complexity of this interaction, of the exchange of power through the passing back and forth of the gaze and the woman's hijacking of it through her mocking of the men--and then her literal laughter as she awakes--is dazzling. It's one of my favourite sequences from this period in film, second only to the clock/seduction scene from Trouble in Paradise. Take, too, the professions of the men as essentially feckless-artist types (asked in round numbers how much he earns a year, George replies, "In round numbers? Zero") finally capable of success under the tutelage and agency of a brilliant woman who remains above domestication: elusive and dangerous. See in Gilda's uncontrollable liberty the heroines in Hitchcock's late masterpieces--and see Hitchcock as Lenny, squeezing his bunnies (birds?) so hard out of love that they break. Lubitsch doesn't squeeze them at all, and so Gilda ends her time with us as singular and powerful as she began. Shut up and deal, indeed. THE BLU-RAY DISC
Criterion delivers Design for Living to Blu-ray in a beautiful 1.33:1, 1080p presentation sourced, according to the liner notes, from a "35mm fine-grain master positive." Meaning the transfer is a generation away from a negative, though Criterion has performed its usual digital magic and the image, beneath an impenetrable coat of age, is sharp and contrasty. The attendant LPCM 1.0 audio is more than adequate--everything is clear, even as the dialogue collides, and the small amount of hiss is preferable to dead silence. A modest portion of supplementary material begins with The Clerk (3 mins., HD), a segment from the 1932 omnibus film If I Had a Million directed by Lubitsch and starring Charles Laughton that offers a nice punchline, if little else. "Selected Scene Commentary" (36 mins.), by the abovementioned Prof. William Paul (author of Ernst Lubitsch's American Comedy), is a track that starts off feeling scripted and awkward, but quickly reveals itself as invaluable for Paul's insights into Lubitsch and the back-and-forth he does comparing Design for Living to Trouble in Paradise.

"Joseph McBride: The Screenplay" (23 mins., HD) is an interview with McBride wherein he compares Hecht's script to the Coward play, though he doesn't mention that Samson Raphaelson, Lubitsch's collaborator on Trouble in Paradise, declined to participate this time around because he saw no reason to try to adapt Coward and, besides, felt like Lubitsch should move on from what he though was an essentially "silly" genre. "Play of the Week: A Choice of Coward" (74 mins., HD) is a BBC production of the play. It's a tough watch; Lubitsch was right when he calculated that Coward wouldn't connect with American audiences. The delightful Kim Morgan writes the booklet essay for the disc. Most associated in my mind with the study and celebration of film noir, she focuses in on the sexuality and gender politics of the movie in question.  It's good stuff.