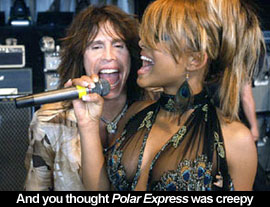 by Walter Chaw At some point you decide that you're either going to play pool with Be Cool or you're not. You're going to have to decide whether Dwayne "The Rock" Johnson's mincing caricature of a gay man is actually a self-parody of his own pumped-up, homoerotic image (see also Vin Diesel's simultaneously-opening Mr. Mom ape, The Pacifier), and whether this studied unkindness towards black people is actually only a satire of the bling-bling gangster culture that has all but defined rap music and young urban culture for the wider mainstream white audience. If you're resolved that Be Cool is meta-fiction that's more sociologically self-aware than other masturbatory cameo hustlers like Ocean's Twelve (and it might be), then it is indeed sort of liberating to give up and laugh along with the horde. (What could be funnier, really, than The Rock limping his wrist and doing a dialogue, solo, from cheerleading classic Bring It On?) But there's this lingering, disturbing thought I can't quite shake that Be Cool is only being a smartass part of the time--and maybe being a smug, insufferable prig all of the time.

I imagine it feels a little like making a deal with the devil. Or with ex-shylock Chili Palmer (John Travolta), who, having conquered Rene Russo and the movie industry in Get Shorty, returns to conquer Edie (Uma Thurman) and the "American Idolized" modern music industry, resplendent as it is with divas and scaled scales. It's also filthy with new-pejorative "thugs"--young black men branded as criminal in their thousand-dollar jogging suits, retro sports jerseys, black cars with mad rims, and, probably, designer firearms. Their leader is Sin (Cedric the Entertainer) and the pretender is Raji (Vince Vaughan, in his best performance since Swingers), a man so desperate to be somebody in the Biz that he's calculated--in Be Cool's cynical calculus--that the best way to achieve this is to be black. And armed. And a murderer. To show that the film thinks he's wrong, it has him set on fire and made the object of sadistic ridicule--forgetting in the process that the real heroes of the picture are a murderous Mafioso and his alcoholic chippy. On a similar tack, it establishes that the word "nigger" is wrong by having Cedric the Entertainer shoot a few rounds into an offender after delivering a long speech on the positive contributions of African-Americans to American culture. Irony? If you say so.

We forget, too, because we're so desperate to see Travolta and Thurman replay their idiosyncratic tango from Pulp Fiction that we hardly even notice that director F. Gary Gray is no Quentin Tarantino. (Just as the Black-Eyed Peas are no Chuck Berry.) Last point to be taken as either satire or unfortunate: The ingénue whom Chili and Edie champion to the consternation of Sin (and the Russian mob, and Raji, and gay bodyguard The Rock, and rival producer Nick (Harvey Keitel, who played himself in Get Shorty)), Linda Moon (Christina Milian), is awful--nowhere more so than during a dangerously extended centerpiece in which she sings a duet with the freshly-sharpened Steven Tyler and Aerosmith that, hilariously, launches her career.

Small details here and again are funny without the hostility: The Rock's character, for instance, has perhaps the last existing Rhinestone poster hanging in his bungalow, while Edie, freshly widowed by the Russkie wiseguys for some expedient post-modern reason, wears a baby-doll T-shirt sporting the letters "widow." But the bulk of Be Cool has to do with grabbing the satirical baton and swinging it around recklessly, revealing The Rock as a guy with an extremely healthy sense of humour about himself while betraying, at the same time, that gay burlesque as a virtue to heterosexuality is eternal. The same could be said of the kitschy Be Cool: Shot with a genuinely puzzling array of establishing tricks (a close-up of a teacup opens a couple of scenes, reminding of Notorious but without reason) and hampered by editing choices that make it clear that at any moment, someone in the movie is laughing behind their hands at someone else, it's so determined to be smart that it comes off a little desperate.

Be Cool is an invitation to snark, in other words. Watch the scene where The Rock does his gay audition piece and note how Gray underlines just how ridiculous Chili and Edie find the man's dreams. Get Shorty worked to the extent that it did because no matter how stupid people were behaving, everyone had a little tear in the corner of their eye when they spoke of what movies meant to them and how much it mattered, spiritually almost, to become a substantial part of just one of them. Be Cool, inside and out, is about marketing, bribing, buying things, winning awards, and cranking out substandard, populist product for no other tingle than the jingle in the pocket. Raji, the white guy who wants to be black and respected/feared, is the most memorably wrought character in the picture because he's the only one not saddled with a ton of ironic self-awareness. Even though his dreams are venal and ludicrous, they're dreams all the same. Originally published: March 4, 2005.