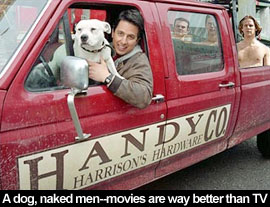 by Walter Chaw Has there ever been a prospective leading man this self-immolating? Ray Romano on the big screen comes off as some kind of etherized cross between Jerry Lewis and Woody Allen: a nightmare auto-consumptive, allegedly comic offspring who, left alone for long enough, will eventually swallow his own face. I haven't felt this much aggressive antipathy towards a personality since the heyday of George Raft. Romano's performances in Ice Age and now Welcome to Mooseport deposit him square in the David Caruso/Sean Hayes school of engaging television performers whose charms are unique to the boob tube. They're small-screen vampires, and 35mm is their sunlight.

In the proud tradition of Adam Sandler and Charles Dickens, Romano plays a guy named Handy who runs a hardware store in titular backwater Mooseport. Dating the same smirky harridan for the past six years, veterinarian Grace (Maura Tierney), Handy doesn't know that Grace is desperate to be married to his remarkably irritating self, and so when ex-President Monroe Cole (Gene Hackman) starts making the moves, Grace accepts. In an election year, after what happened in Florida last election year, it seems like the perfect time for an incisive political satire--we're still waiting. See, Handy is afraid to take chances (more on this character type and conundrum later in Eurotrip), and Welcome to Mooseport is essentially a poor situation comedy based on making the most insufferable creation to be captured on film since John Leguizamo's Pest. A subplot about Handy and President Cole running against each other in some contrived mayoral race that showcases every variety of quirky senior citizen (the nudist, the potty-mouthed old biddy usually played by Betty White, the sassy ethnic earth mama, usually Asian or black) doesn't go anywhere and just makes an already laboured piece seem interminable.

Welcome to Mooseport represents the worst instincts of the modern assembly line director (Daniel Petrie this time around), redolent with dog reaction shots (including a two dogs humping gag that, let's face it, never gets old because it was never fresh), a horrific score (by John Debney), and ridiculous caricatures of the aged. Its plot is astonishingly tired, its leads have absolutely no chemistry, and a scene where Hackman says "I had dignity once, does anyone remember that?" is enough to bring a poignant tear to the eye on the actor's behalf. Romano pollutes the ether with off-the-cuff riffs like "The frog is empty. There's nothing in the frog. Except for frog" (David Mamet, eat your heart out)--it's a performance that makes knuckles pop and neck tendons strain in a film that not only highlights how good Election and even Wag the Dog or Bulworth are, but how underestimated that episode of "The Simpsons" where Homer faces off against ex-President George Bush the elder is. Welcome to Mooseport is the worst film of the year so far; only nine-and-a-half months to go.

Eurotrip also reminds of an episode of "The Simpsons"--the one in which Bart gets a job as an air courier so that he can travel for free, with Bart replaced by rapscallion Cooper (Jacob Pitts, really good) and schlub Scotty (Scott Mechlowicz), the latter of whom has just discovered that his girlfriend ("Smallville"'s Kristen Kreuk) is a slut and so embarks on a Sure Thing trip to hunt down hot e-pal Mieke (German pop star Jessica Böhrs). Along for the titular trip are twins Jamie (Travis Wester) and Jenny (Michelle Trachtenberg)--the former playing the character in need of a little loosening up, the latter so awful on the "Buffy the Vampire Slayer" television series and not any better here, demonstrating that even though she can't act, at least she's consistent.

Matt Damon makes a smart and hilarious cameo, while David Hasselhoff, of all people, does the same, and Eurotrip, shockingly, is actually sort of funny, despite--maybe because of--how misogynistic, crude, and puerile it all is. It hates women, peddles in a peculiar sort of pedophilia that encourages underage binge-drinking and ogling barely legal Trachtenberg (who, when she disrobes down to bikini, is the spitting image of a nine-year-old girl), and offhandedly attacks Italians and homosexuals. In many ways the quintessential fraternity picture that the crass could observe resembles a college recruiting tool for the University of Colorado, Eurotrip also attacks the Pope, references The Boys from Brazil, Love Potion #9, Ice Pirates, Moulin Rouge!, and Game of Death, demonstrating in the meantime a cheerful political incorrectness that should be applauded--blossoming as it does in the middle of our tediously sanctimonious culture. The hubbub around The Passion of the Christ is predictably hysterical; more fruitful would be an outcry over a film like Eurotrip that sees a young German boy goose-stepping and the papal selection process lampooned for the sake of a little hot Bavarian action.

With lots of nudity male and female (the comic potential of man-ass has already been plumbed in a quartet of films this year, between this, Along Came Polly, Welcome to Mooseport, and The Dreamers), Eurotrip, for all its shameless objectification of women, reserves its harshest indignity for its best character, as Cooper gets anally raped by Xena, Warrior Princess and two Dutch goons. It's a hard film to pinpoint in that it that was obviously made by smart folks but wallows in the muck of our basest instincts. Eurotrip is a loose collection of gags, a cocktail napkin premise strung out over long nights boozing and giggling at the campus bar comprised wholly of urban fairy tales and sex fantasies. Damned if it doesn't work more often than not. At the heart of the matter, even if it's not your taste, at least it doesn't make you want to chew your foot off to escape it like Welcome to Mooseport does. In the interests of full disclosure, maybe Eurotrip is only good by comparison. Originally published: February 20, 2004.