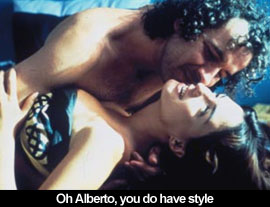 by Bill Chambers By the fifteen-minute mark of The Other Side of the Bed (El Otro lado de la cama), actresses Paz Vega and Natalia Verbeke have both doffed their clothes and bedded down the same man, but the movie, a musical, is--or wants to be--as sanitary as an Elvis vehicle. Director Emilio Martínez Lázaro labours to make promiscuity innocent again, if ever there was such a thing, and his sense of whimsy is quite seductive at first, since films about the self-interested are so often as shallow or tunnel-visioned as their protagonists (see: Thirteen). Lázaro risks, of course, glossing over his characters' predicaments to the point of condescension by leeching the film of any gloom, but something possibly worse insinuates itself, a kind of apathy as it occurs that frothiness is being used to evade subjecitivity altogether. The Other Side of the Bed is colourfully sterile, if you will, an ensemble piece in the noncommittal sense of the term, and if you find yourself empathizing with anyone on screen, it's generally because she's not wearing pants at the time.

The title is a variation on the "grass is always greener" axiom. Paula (Verbeke, beauty personified) breaks up with Pedro (Guillermo Toledo) to secretly be with his best friend, Javier (Ernesto Alterio, a mix of Mathieu Kassovitz and Yvan Attal); Javier relegates Paula to the role of spare tire by attenuating his break-up with live-in girlfriend Sonia (Lena Headey-esque Vega), who begins to have eyes for the newly-single Pedro. The movie opens with Paula and Sonia serenading their respective accursed lovers in bed, and it's humorously difficult to concentrate on the subtitles with Verbeke lolling around in page 21 of the Victoria's Secret catalogue--something I mistook for an indication of canniness on the part of Lázaro: It's hard enough making a twenty-first century musical, let alone one that travels well. But it's more blatant desperation than shrewdness that begat not only somewhat incongruous nude scenes from the female leads, but also six or seven song-and-dance numbers (which, between lyrics that compare relationships to nuclear reactors and synchronized swimming-on-land choreography, are strictly of the Viva Las Vegas school); because the movie isn't tethered to a strong point-of-view, it relies on the imposition of exploitable elements. Call it Stepford Almodóvar. Originally published: February 20, 2004.