by Walter Chaw The first fascination of Alfred Hitchcock's original The Man Who Knew Too Much is that when a dashing foreign agent (Pierre Fresnay) is shot just minutes into the film, it's Jill (Edna Best), the wife in the heroic central couple, who's privy to his last words. They're dancing together in the middle of a ballroom that feels like a glass cage (naturally) when the dastardly deed is done, a married English woman on holiday with husband Bob (Leslie Banks) and daughter Betty (Nova Pilbeam), who look on approvingly. When Hitchcock remakes this movie 22 years later with Doris Day and Jimmy Stewart, he has Ugly American Jimmy (the one privy to the dying man's last words) drug his hysterical wife in the first of many instances of Hitchcock undermining Stewart's status as everyone's favourite Yank. 1934's The Man Who Knew too Much, like so much of Hitchcock's British output (this is the first of his six films for Gaumont), remains current for scholars looking for tropes, images, sequences that prefigure his later work. The premature demise of what would have traditionally been the star of the picture (poor, dead Louis, also a champion ski-jumper) prefigures Psycho, of course, while the glass cages recur everywhere from Young and Innocent (which likewise features the musical plot point of this film) to Notorious to Hitch's collaborations with Tippi Hedren. A gaze at the 34-minute mark through wrought-iron gates predicts the moment of discovery in Strangers on a Train, followed fast by a deliciously uncomfortable dentist sequence I'm surprised Hitch never came back to. Leave that, I suppose, to William Goldman and Marathon Man.

The final fascination of The Man Who Knew Too Much is that Jill, champion clay-pigeon shooter, becomes the undisputed prime mover and hero of the piece, wrestling a rifle away from a reluctant bobby and potting arch-henchman Ramon (Frank Vosper) off a rooftop. Between: That image of little Betty, mouth agape in fear, as she's spirited away into a Narnian winter nightmare; and of course there's Peter Lorre, permanently carving out a place for himself in the movies in his English-language debut--indeed, before Lorre had any grasp on the language at all--between this brilliant, shockingly-nuanced performance and his legendary turn in M. Here he's "Abbot," the leader of an international gang of thugs and assassins planning the assassination of a foreign head of state in England during a concert at the Royal Albert Hall. The religiosity of his name proves no accident, his henchmen holing up above a sun-cult's meeting place as Sir Alfred runs roughshod, even at this early stage, over Church and, in the character of Abbot's Girl Friday Nurse Agnes (Cicely Oates), State. To underscore the worthlessness of the authorities, Hitchcock frames a shootout on the backstreets of London with a surprisingly high number of police casualties. In other words, while there are hints in Hitch's early films for BIP and Gainsborough of the obsessions and themes that would define the director, it's in The Man Who Knew Too Much that he begins work on his proverbial Old Testament.

It seems that French Agent Louis has information about the time and place of the upcoming assassination and, as he dies from an assassin's bullet (after having predicted his own death on the slopes), he tells all to heroic Jill. To insure their quiet, the baddies, led by Abbot, kidnap young Betty. No, it doesn't make a whole lot of sense--a problem that doesn't resolve itself during a ridiculous chair fight--but it does indicate Hitchcock's general disdain for narrative cohesion when there's tension to be had in absurdity. There's a good reason he was known as Master of Suspense rather than Master of Screwball or Action; by the 1950s, he's mostly given up on the skylarks of this early portion of his career. Indeed, The Man Who Knew Too Much is least compelling when its cast engages in awkward banter--that sort of staged back-and-forth only worked for Brit-Hitchcock through the Charters & Caldicott characters in The Lady Vanishes. Thereafter, the funniest Hitch film is Psycho.

Running an eye-blink of 75 minutes (the '56 version's a bloated 120), The Man Who Knew Too Much is scarcely more than ideas--but such lovely ideas. It's about alienation, about the secrets that married couples keep, about their fears for their children and of the world and things in the world that would, for instance, cause Lorre to flee his native Germany, first to Paris, then to London on a borrowed train pass, then to Hollywood like so much of Eastern Europe. In early dialogue about Sarajevo, it harks back to the start of WWI and forward to the Serb/Croat conflict that made a brief, idyllic Winter Olympics the ironic counterpoint to so much bedlam. It has Lorre fully-formed already, his legend cemented by the moment in which he cradles cold Nurse Agnes as she falls under a fusillade of bullets, then stands to deliver his summary judgment on the lawgivers massed beneath his window. It is so much the superior film to Hitch's unpleasant remake that it's shocking to me there's ever a conversation about it. Look no farther, really, than the differences between the two mothers: the one a lion, the other a pathetic, drugged figure, prone to hysteria and exactly the type of woman Hitchcock didn't feature in his films unless he was making some sort of ironic point. Though choppy, this The Man Who Knew Too Much is the first time there's more of what we recognize as Hitch than there is of the other stuff: more freedom, more fun, and inklings of the obsessions that would define one of the great auteurs in the history of the medium. Is it more important than it is entertaining? How do you even make that distinction? 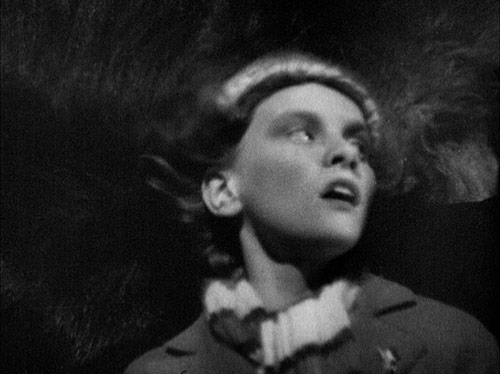 THE BLU-RAY DISC
Criterion brings The Man Who Knew Too Much to Blu-ray in a sterling 1.33:1, 1080p transfer of a second-generation nitrate negative found in deep storage at the BFI. A nifty little restoration clip included in the special features walks us through the process of bringing new life to a public-domain title that, at 80, now doesn't look a day over...oh, forty or so? Damage is minimal (and mostly optical in nature), the grain is organic and filmic, and there's not a trace of digital artifacting to mar the experience. The LPCM centre-channel audio was sourced from the optical track of a 35mm print originally owned by David O. Selznick, and the hiss is kept to an impressive minimum. Some passages sound slightly garbled, I admit, but I blame that as much on Hitch's focus on cascading dialogue as I do any shortcomings of the remaster.

Historian Philip Kemp offers a congenial, fact-packed commentary long on anecdotes and relatively short on analysis, though I do begin to wonder if I don't prefer a lot of information over analysis with which I don't agree. Kemp addresses all pertinent factoids, such as the picture's genesis (it began life as a Bulldog Drummond vehicle) and Hitch's early battles with censors, and he provides lots of good information about Peter Lorre. He touches on the relationship the film had to actual historical events and even draws a couple of comparisons to the remake. Have I mentioned how much I dislike the remake? An "Interview with Guillermo Del Toro" (18 mins., HD) finds the director (who published a monograph on Hitchcock in his native Spanish) talking about the film as an unabashed fan, sure, but a particularly articulate and well-informed one. It's broad, but it has pinpoints of real insight. I wish spoke Spanish well enough to read Del Toro's book--it might be reason enough to learn.

"The Illustrated Hitchcock" (50 mins., upconverted to HD) is a 1972 television interview with Hitchcock conducted by Pia Lindstrom and William K. Everson. Again, broad, and Hitchcock in his own words can be arrogant, often insufferable--but there's value here, for sure, if only in hearing his thoughts on working with Charles Laughton. "Hitchcock and Truffaut" (23 mins.) is another audio sample of the well-traveled 1962 interview, this one featuring Hitch's oft-quoted "Paris Café" distinction between suspense and shock. "Restoration Demonstration" (5 mins., HD) is the abovementioned bit on the arduous process of refurbishing the film. The keepcase contains a 20-page booklet with a write-up from Farran Smith Nehme that does the movie proud.