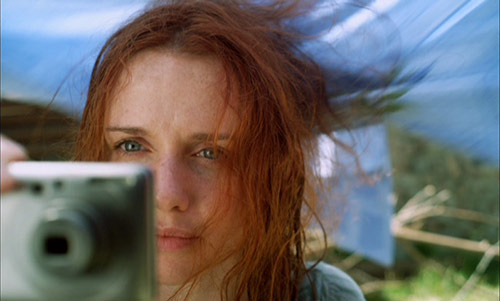 by Walter Chaw Julia Loktev's The Loneliest Planet is an existentially terrifying little film about life's essential loneliness, the absolute mutability of interpersonal relationships, and the ways our identities are formed not only by our perceptions of others, but by our preconceptions of the roles we play and, in turn, cast others to play, unbeknownst to them or to anyone. It gives the lie to the possibility of an unconditional relationship, to the idea that we can ever truly know ourselves or the people with whom we choose to share our lives. Most uncomfortably of all, it posits that everything we believe, everything we hold most dear about who we are and who we think we are, can change in an instant. It's about love in that way, but love only in the context of the brutal, capricious, arbitrary world--love in the sense that we invest everything in it in acts of faith entirely unjustified by Nature and circumstance. There's a scene in The Loneliest Planet where two pairs of feet play with each other on top of a sleeping bag, followed fast, after something small but terrible happens, by the owner of one pair of those feet watching the owner of the other walk away and eventually disappear into the ugly, insensate terrain of Russian Georgia's Caucasus mountains. I think it's no accident that the film takes place there, where mythology places Titan Prometheus in his eternal torment: Prometheus the bringer of fire, and life, and foresight (literally, in his name)--the father of Man flayed bare and reintroduced to the carnal night.

Loktev's latest is all of quiet moments and long takes. It places our heroes in the middle of nowhere both in the film and on screen, dwarfing them with rivers, mountains, endless scrub, patches of dirt...nothing's truly alive here except the love between soon-to-be-married Nica (Hani Furstenberg) and Alex (Gael Garcia Bernal). They wash each other, make love, flirt and play and hike and climb, and, in an affecting moment in a movie awash with affecting moments, Alex removes Nica's tampon so the two can consummate their intimacy. It's real. It's brilliant. And it speaks volumes about their relationship as the picture opens. Soon, the pair enlist guide Dato (Bidzina Gujabidze) and set off into the wilderness, and it's one of the real wonders of this film that while there is throughout the threat that storm clouds are gathering somewhere just beyond them, Nature clarifies itself as neither benevolent nor malevolent, but rather merely this thing upon which we project our subjective notions. It's William Carlos Williams's red wheelbarrow, except The Loneliest Planet is more explicitly interested in how relativity shapes our attitudes and realities, forms our relationships, and creates the ripples that resonate through our lives. A scene in the middle could be described as the conflict of the piece, though in truth the conflict of the picture lies outside the picture. Still, it allows The Loneliest Planet to approach its central relationship in a different way--another avenue for anthropology and introspection.

The Loneliest Planet would fit in beautifully with Gus Van Sant's Gerry, Elephant, and Last Days; long stretches are scored by the couples' footfalls, shorter sequences by a spare, romantic score that reminds a great deal of Wong Kar Wai's strategies. Indeed, although Wong's drunk, love-struck collaborations with DP Christopher Doyle are the antithesis of Loktev's work here with cinematographer Inti Briones (who's more Harris Savides than Doyle), the obsessive contemplation of the intricacies of love in all its stages and incarnations recalls Wong's late-'90s masterpieces. The picture has echoes, too, of Sofia Coppola's work. Consider a moment where Alex puts on a pair of sunglasses in his tent at night while a campfire flickers against the background, or another where Nica offers a bit of food and the look on her face when it's rejected. The Loneliest Planet requires exactly the sort of intimate understanding of human behaviour we earn through heartbreak and experience--through falling in love, betraying, being betrayed, and staking the borders around our sense of ourselves, our moral boundaries, our beliefs. It's alive; it requires active participation and curiosity; and it speaks eloquently to the best possibilities of film as a medium for conversation and reflection. The Loneliest Planet is beautiful.

THE DVD
by Bill Chambers Sundance Selects has opted to release The Loneliest Planet exclusively on the cutting-edge DVD format, distributing it to stores via the tried-and-true method of horse and buggy. Having streamed the film online, I was hoping for a more fulfilling viewing experience when it finally hit video; the (pillarboxed) 1.66:1, 16x9-enhanced presentation is fine, but it's DVD: Even upconverted, the image is soft and flat, with faint traces of mosquito noise. Too, without the aid of deinterlacing technology, combing artifacts will render this disc nigh unwatchable. Colour and contrast are gratifyingly rich, all things considered, but standard-def is standard-def. The accompanying DD 2.0 audio is modest, to say the least--any fireworks are limited to Richard Skelton's score. Perhaps a lossless track would bring a more nuanced mix into relief. Also on board is a fragmented, fly-on-the-wall "Behind the Scenes" featurette (29 mins.) replete with the sound of wind hitting microphones familiar to amateur videographers everywhere. The Georgian locations look a lot less desolate with the iris opened out to show a small but spirited international crew accustomed to doing each other's jobs. Their merriment is such that it buttresses Billy Wilder's claim of the darkest material yielding the most joyful productions. Rounding out the platter, a step-frame gallery of photos mountaineer/actor Bidzina Gujabidze took on various climbs across the globe cries out for HD resolution. Trailers for Price Check, Cheerful Weather for the Wedding, and On the Road cue up on startup.

I wrote my college thesis on a number of films - one was Loktev's Day Night Day Night, and it also included Van Sant's Death Trilogy. Glad to see someone else make the connection, and glad to see her latest film get such recognition.