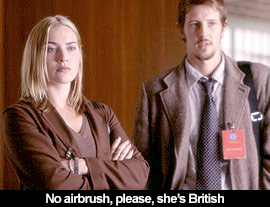 by Walter Chaw SPOILER WARNING IN EFFECT. One wonders if there isn't, after all, a subtle right-wing conspiracy at work in the entertainment industry, where ultra-liberal stumps are turned into the sort of ostensibly pro-leftist propaganda reel that does serious harm to the pro-leftist agenda. If it's not the reprehensible The Contender, with its Ayn Rand-ian hypothetical, it's I Am Sam and its bizarre vilification of the child welfare system--or worse, John Q, with its curiously misdirected lament against our obviously broken health-care state. Trumping them all in terms of muddle and melodrama, however, is The Life of David Gale, an anti-death penalty tirade that, by the end, feels like a life sentence the audience wishes hadn't been commuted. The only way to make any sense of the film is to suspect it of darker motives: Its ultimate message, and it's not a bad one, seems to be that the criminal justice system the film so actively vilifies is, in fact, the only honest (though imperfect) force in the entire mess.

David Gale (Kevin Spacey) is a brilliant philosophy professor who, after getting a divorce and being seduced by endless fifths of Jack Daniels, finds himself without a job and in prison for the rape and murder of his friend, fellow anti-death penalty activist Constance (Laura Linney). Visiting him there in his final days is reporter Bitsy Bloom (Kate Winslet), chosen for her journalistic virtue (she's spent time in jail for refusing to reveal the identity of child pornographer sources for an article) to chronicle the titular life of the titular martyr. Of course Bitsy is instantly on David's side as his flashback-heavy tale of ivory-tower-to-up-the-river (punctuated by just too many pointless references to Lacan, Socrates, Kant, and Kafka) builds to a series of the most confused messages and revelations since the last Ashley Judd thriller. (I'm no genius, but if a picture is set in rural Texas, it's probably best not to have as the critical identifying marks of a villain his cowboy hat and pickup truck.) And, of course, it will be up to Bitsy to gather enough evidence to free the good professor before the good ol' boys in the Lone Star State fire up Old Sparky.

Presented with transitional montages sprung from the hand of an epileptic moron, The Life of David Gale accuses evil conservative forces of trying to make ultra-liberals look like dangerous loonies while making its ultra-liberal criminals just that. Not only is the rape and murder staged to prove that the criminal justice system is flawed, the very fact that it's staged suggests that the criminal justice system, in punishing someone wilfully complicit in the death of another, is working just fine. By itself, the dedicatedly predictable potboiler premise is all right--all right, provided that the film doesn't spend the duration of its running time celebrating the virtue of its collection of schemers and plotters. The real danger of movies like this is that the general poorness of the production in every aspect (direction, acting, script, logic) is obscured by its glad-handing of a hot-button topic.

The benchmark modern anti-death penalty film is Tim Robbins's Dead Man Walking--proselytizing, yes, but never amateurish or disrespectful of its audience. Taken as a mystery, The Life of David Gale is astonishingly sloppy (consider the mysterious treatment of cell phones, the mystery motive of "cowboy hat man" in following our heroes, the decision to report vital evidence to a man who has just been revealed as untrustworthy, the reasoning behind the first visit to "cowboy hat man"'s homestead, and so on); taken as a drama, it can't be understated how poorly the entire thing is written and carried off; and digested as a political rant, the picture shows itself to be as bullying, dim-witted, and fuzzy as the old guard Republican gentry it seeks to attack. Politicism is charted on a circle, and the extremes of both ends tend to meet at the bottom. None of which goes very far in explaining why The Life of David Gale climaxes with a hilarious tribute to Gallipoli before launching into a protracted epilogue that abuses "Turandot" in a way humiliating in its perverse audacity.

Armed with a pair of Oscars for courageously unsentimental work in films like The Usual Suspects and American Beauty, Kevin Spacey has embarked on a terrifying campaign of sadomasochistic auto-immolation that includes no fewer than three noble-alien teacher roles in his last four films. Two-thirds of the way into The Life of David Gale, Spacey even has the moxie to assume the Christ pose on a lawn, crucified to the mast of a sinking ship by now a fourth nail (after K-Pax, Pay it Forward, The Shipping News). An exceedingly talented performer, he's fast becoming our generation's own Alan Alda: In The Life of David Gale, the actor looks grave while moping about simple-mindedly like his Quoyle performance, giving stirring movieland lectures as in Pay it Forward, and being smug and disconnected, à la K-Pax. Joining Spacey on his cross is Linney (likewise a talented actor who turns in a performance so atrocious that uncomfortable titters accompany her key dramatic rave) and Winslet, who just can't quite get the hang of a distracting Yankee accent.

The Life of David Gale is interesting for no intended reason. It is a document of the continuing slide of a gifted performer seduced by the fast-fading sway of his imagined social influence and a look at how Hollywood, about twice a year, tosses off a hideous "message" movie to indulge some star's (Denzel Washington, Sean Penn) saviour complex. A vanity project in the worst sense of the word, The Life of David Gale is a picture summarized by its recurring device of a rental car with a bad radiator: overused, overheated, and ultimately just a steaming heap of junk. Originally published: February 21, 2003.