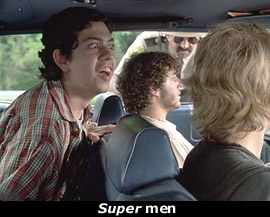 by Walter Chaw From the self-satisfied pens of LA/NY sketch comedy troupe "Broken Lizard" springs Super Troopers, fully formed like some Plutonian messenger from midnight-movie hell. The film is a series of skits involving a bumbling division of highway patrolmen more interested in pranking the unfortunates they pull over than in doing their jobs. Wrapped around a pathetic excuse for a plot, the vignettes vary wildly in quality from dull to slightly less dull, the lone exception being the opening sequence, which approaches the menacingly surreal. A film that debuted at last year's Sundance Film Festival and sat on the shelf since for various reasons (not the least of which is a running gag involving "Afghanistan-imation" and some mocking pro-Taliban dialogue), what Super Troopers succeeds the most in doing is providing a disquiet world the long-dreaded completion of the Police Academy series.

With an embarrassed Brian Cox as the head of the miscreant cops, Super Troopers pretends to be about a budding romance between one of the guys (Jay Chandrasekhar, Kevin Heffernan, Steve Lemme, Paul Soter, or Erik Stolhanske) and a dispatch officer for the rival state police, Ursula (Marisa Coughlan), as well as an extremely distasteful discovery of a corpse that leads to a drug-smuggling operation. Super Troopers would have been far better served by avoiding the Police Academy formula altogether and just sticking to the macabre Brain Candy formula. Never the twain should have met as the results are aggressively unpleasant (a naked delousing of portly Heffernan plays as particularly unwatchable) and strangely pleased with itself. Chandrasekhar in particular (he also directs this mess) goes through the entire film like the cat that ate the canary. You'll want to wipe the smirk off his face--best way would probably be to have him watch his movie.

The film gets the majority of its alleged chuckles from various states of inebriation--a ploy that is always tiresome but handled in Super Troopers like a rambling Cheech & Chong routine if Cheech & Chong were never funny. You know you're in trouble when the last thirty minutes of your film rely on the hilarity embedded in six grown men getting plastered and driving around in a stolen police car. It's loud and obnoxious, mistaking volume for comedy, and it just goes on and on. I'm not going to make the same mistake: Super Troopers is a movie about idiots made for idiots. I know this encompasses a huge demographic, but at least have the animal cunning not to admit that you fall into it if you do. Originally published: February 15, 2002.