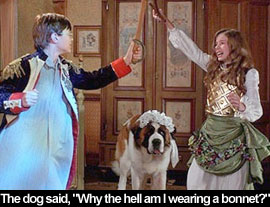 by Walter Chaw A perverse lollapalooza of loaded images and disquieting implications, P.J. Hogan's live-action Peter Pan is this year's most intriguing Freudian shipwreck, resurrecting the darkness and poetic pessimism of J.M. Barrie's play--and Peter and Wendy, Barrie's own novelization--that has been all but forgotten since Disney's well-regarded 1953 treatment. (While nowhere near as saccharine as something as mendacious as Brother Bear, that animated version is still of a Disney tradition that washes dangerous source material mostly clean of credible malice.) At its heart, consider that the Pan story is about child seduction/abduction in the Yeatsian "Stolen Child" tradition, and a colony of "lost boys" that have forgotten their parents and, crucially, been forgotten in turn. The mirror of a parent's love discarded in this way renders the film's heart-warming conclusion a touch bitter, with the spectre of the question "but what about their parents?" hanging over it.

For the uninitiated, on the night young Wendy Darling (Rachel Hurd-Wood) overhears that she'll be shipped off to boarding school and away from her brothers John (Harry Newell) and Michael (Freddie Popplewell), sprite Peter Pan (a fairly dreadful Jeremy Sumpter) flies through the window with pixie Tinkerbell (Ludivine Sagnier) in tow. Instantly interested in beautiful Wendy, Peter offers a trip to Never Land, where children never grow up and get to spend eternity dancing with "savages" and fighting pirates led by the infernal Captain Hook (Jason Isaacs).

Hogan's film is pitched somewhere between the director's cut of Ridley Scott's Legend and the ravaged theatrical version of the same, a picture at war with itself between the desire to present the source faithfully black and the instinct (or financial imperative) to appease a popular perception of the story as one without edges, a schizophrenia underscored by James Newton Howard's light-hearted musical accompaniment to the film's murder and eroticism--misdirection akin, almost, to the attendant banjo music in the rape sequences of Last House on the Left. What works is the decadence of the colour scheme and Hogan's courage to generally honour a source that includes this as a description of its subterranean hero as he prepares for war: "Now he crawled forward like a snake, and again erect, he darted across a space on which the moonlight played, one finger on his lip and his dagger at the ready. He was frightfully happy." (chap. 13). Peter Pan is laudably courageous in exploring Barrie's shadow plays: the sewing of Pan's shadow to his foot literal and punctuated by a cry of pain; the idea that Hook's shadow is Pan (and that clock-eating croc); and, fascinatingly, the thought that the jealous/treacherous Tinkerbell is the ghost of Wendy's sexual future.

As both Hook and the child protagonists' father (!), Isaacs is his own shadow in the picture--opposite sides of the image of the patriarch in a child's eye, creator and destroyer. Pirates are killed by lost boy and Hook alike, the latter dispatching with the minions that have displeased him with a nonchalant menace that sort of reminds of Darth Vader's occasional fits of pique. The picture is packed with throwaway moments that haunt: a trio of mermaids as menacing as myth intended, a scene where the lost boys shoot Wendy out of the sky with arrows, even a kiss that sends Pan rocketing into a starry sky suddenly soiled by a spontaneous Milky Way. Peter Pan is so rich for exploration (sexual, developmental, or otherwise) that the moments where Hogan regresses by resorting to dog reaction shots and condescending score stings are more disappointing than usual. The picture is sullied (fatally, truth be told) by populist meddling, but there remain enough beguiling bits and pieces to suggest a certain longevity outside its intended family audience. It's not a good movie, but it's almost a great one, and for what it's worth, there's a space reserved on my shelf for it right between Batman Returns and Babe: Pig in the City. Originally published: December 25, 2003.