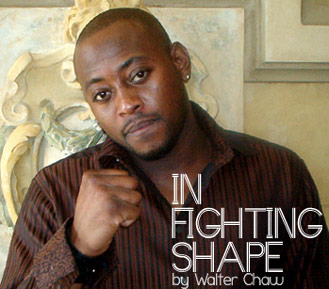 February 22, 2004|Just three days after a surprise blizzard shut down Denver for an evening, I met Omar Epps at the Hotel Teatro, where we chatted about how when it's above freezing in the surprisingly sunny Mile High City, there's a line around the Dairy Queen. We discussed the strange social caste system that's developed in Aspen, what with trailer parks inhabited by all the service industry workers ringing the jewel of the Rockies like a Dickensian indictment of excess, and eventually, we worked our way around to the subject of minority directors and his new film, Charles S. Dutton's Against the Ropes. In truth, I was more interested in his work with personal hero "Beat" Takeshi Kitano in Kitano's English-language debut Brother, and how an actor still somewhat on the margins of stardom (despite one of the truly memorable "ER" turns as Dr. Dennis Gant, the poor sot who throws himself under the L after half a season) has managed to assemble a filmography diverse enough to incorporate titles like Breakfast of Champions, Love and Basketball, and Dracula 2000. This is to say nothing of his extracurricular projects, such as a music production company called "BKNYC Records," which already has a few artists in its stable. Maybe the question's the answer.

FILM FREAK CENTRAL: Man, do I love "Beat" Takeshi.
OMAR EPPS: Seriously? That's awesome--he's an amazing talent. I got a call, they had something going on... He's a very interesting guy, y'know, and I get this call that says that Takeshi Kitano wants to audition me for his new film and, at the time, I didn't know anything about him. I think he's just not very well known in the United States...

The best director in the world that no one has heard of.
(laughs) That's right, man, that's right.

At least if Miramax has anything to say about it.
(laughs) So I get this call and I go back and look at several of his films and I found them to be extraordinarily interesting, so of course I'm excited to be in his new project. I go in and audition for him and they have me do an improv. He doesn't speak any English and neither did any of his crew so we sort of used a translator to set up the scenario with a Japanese actor who also didn't speak English. Kind of crazy, but that was it. When we wrapped up he started laughing and was just pointing at me and then pointing at his eyes, making a gesture like this (Epps makes a circular motion indicating all of the eye area), which meant "the eyes" that he saw what he wanted in my eyes--and that was it.

"Beat" uses a lot of long, static tableaux in his films, just sort of lets his actors wander in and out of the frame. Did you adjust your performance style at all for his directing style?
No, I have to say that Brother might have been my best experience. Interesting thing about "Beat" is that he doesn't do a lot of coverage and he usually is happy with the first take. It was like doing stage on screen--you could flub your lines, whatever, and he wanted to capture that. It's why his films feel like life, y'know--even when they're so artificial in a way. You really had to be prepared, you had to be on your job.

That last long monologue of the piece, all improvised?
Yeah, all of it. All one take, too. We actually did a pick-up shot or two for that, but the whole thing, the body of it, that was one long shot. Seems like it'd be scary, but it was really fun. More than anything, you knew that he really trusted us, trusted his judgment in casting us--knew that there was something that he was going for that might have been bigger than the flub. Man has vision. Thing with "Beat" is that you know that it's going to be important and that posterity is attractive.

You went to Fiorello H LaGuardia High School of Music, Art, and the Performing Arts in New York, studying theatre.
Right, and the work I eventually did on the stage was off, off, off, off, way off-Broadway. (laughs) I did a student film at NYU, went on the audition circuit, and it came about pretty quick, I did this audition for a film called Juice and, man, I've been blessed really.

You've been typecast as a sports guy.
It's funny, I didn't want to do another sports film before Against the Ropes just for that reason. But y'know, each project that I've done that's been sports-related, I felt like those roles were each a little different from each other and that they allowed me to sort of flex my muscles a little bit as an actor and that's what I was really interested in. In The Program the kid I play had to learn about the bigger world outside of sports, in Love and Basketball it was about a guy putting aside his machismo and getting behind a girl and her dreams--but really when it comes down to it, how do I turn my back on a project starring Meg Ryan and the chance to work with Charles Dutton again? (Epps previously starred with Dutton in TV movies Conviction and First-Time Felon -Ed.) Plus, boxing's one of my favourite sports so that was a consideration. Y'know, I tell people all the time that I'm not a big guy--here, I'm 5'10" and all. It was always sort of a mystery to me why I was always cast as some athlete.

You've been involved in so many different projects, but what really strikes my eye is the number of minority directors you've worked with. What's the first consideration for you when you're choosing your projects?
The script first. I really have to care about it. Would I go to the movie, does it touch me, is it important to me--and after the script overall, I look at the script from a character point of view, I have to make the decision, and it's difficult sometimes, of whether or not I honestly believe that I can do what the script would ask of me to do.

How do you know?
It has to connect to something in me--it's hard to articulate. It has to move me. Once those things are considered, I can look at a bigger picture, and supporting the minority filmmaking community is certainly something that enters into the equation. To be totally straight with you, though, those projects for the most part: they were just the captains of those ships. I'm at a point now that I want to shift my main focus, however, to A-list directors and projects--I'm really hungry to take that next step.

Is that next step the Alfie remake?
I don't know, man, I hope so. That project, I really wanted to work with Jude Law, Marisa Tomei, Nia Long... I have to tell you, what I really want to do is a romantic comedy. (laughs)

I read an interview with Cuba Gooding Jr. once where he said that all the best roles for African-Americans go to Will Smith and Denzel Washington--agree?
Let me put it to you this way, it's the nature of the business.

Besides the fact that most of those "great African-American roles" for Smith and Washington were written for Caucasians...
(laughs) Ten years from now, when I'm producing films, all the scripts are going to those top guys, too--it's all about business. You have to work your way up the ladder and all those Wills, and 'zels, the Martin Lawrences and Chris Tuckers, y'know, those guys you can guarantee a certain amount of money, that's the only reason. It's business at that level--it's not personal, it's got nothing to do with art. I'm not frustrated by that, why waste the energy?

What are you frustrated by?
Ignorance, in myself, in others. When I see people treating other people with ignorance, it really bugs me out of proportion with the offense, I think. I just feel like the world's so accessible that it says too much about you when you remain ignorant. At some point it has to be a choice to stay in the dark and life's just too short for that.