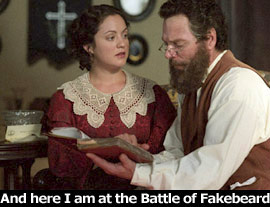 by Walter Chaw Somewhere in the translation from Jeff Shaara's only so-so novel Gods and Generals to Ronald F. Maxwell's magnificently bad film Gods and Generals lies the mystery of why the younger Shaaras and the Maxwells of the world see fit to take a Pulitzer Prize-winning novel like Jeff Shaara's The Killer Angels and make a country-fried trilogy out of it. Perhaps most of the blame should be laid at the ten-gallon feet of Ted Turner, Fortune 500's Yosemite Sam/Ross Perot amalgam who seeks, it appears, to finally get the South to rise again, single-handedly, after about 150 years of threats. It seems odd, however, that The Ted would seek to get the bayonets a-rattlin' again with almost four hours of awkward period speechifying punctuated occasionally by random recreations of random early Civil War battles (Manassas, Fredericksburg, and Chancellorsville), each of which lead to the events of Maxwell's 1993 adaptation of The Killer Angels, Gettysburg.

General Lee (Robert Duvall) and "Stonewall" Jackson (Stephen Lang) may as well be talking marble busts in some Disney Hall of Greek Deities attraction, rooted in place while spouting on endlessly about their manifest right to defend their homes from marauding Yankees. It's not so much that the central issue of racism is skirted as the two African-American characters we get are Jackson's sympathetic servants, leading to the peculiar feeling that Gods and Generals is engaged in a literal whitewashing of the whole slavery thing.

The dazzling lack of balance is the major difference between this film's failure and the relative success of Gettysburg. Jeff Daniels, reprising his Lt. Col. Joshua Lawrence Chamberlain role sans handlebar moustache, is given a few deadening Foghorn Leghorn pontifications (the worst coming in an embarrassing scene with "Didn't you used to be" Mira Sorvino) that only underscore the extent to which the North is a bit player in this conflagration. While credit is due for the clarity of the battle scenes in and of themselves, Gods and Generals washes out as a stultifying tribute to the pathological meticulousness of (largely Southern) Civil War recreationists--glossing over the ideology and blood sacrifice in favour of a series of almost static tableaux. It's doesn't do so much harm to the North as it does to the South, in truth, painting the Rebels as the losers--and bad ones, at that. There's hope that the planned six-hour miniseries version of Gods and Generals will address some of the mammoth shortcomings of the film, but one does wonder if anyone not already in it will give a damn. Originally published: February 21, 2003.