**/****
starring Johnny Depp, Kate Winslet, Julie Christie, Radha Mitchell
screenplay by David Magee, based on the play "The Man Who Was Peter Pan" by Allan Knee
directed by Marc Forster 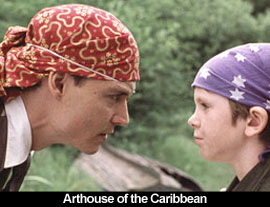 by Walter Chaw Marc Forster's Finding Neverland is well-traveled territory: a historical melodrama that's been over-scored to the point of diabetes and overwritten to the point of retardation. The presumption isn't that we're unfamiliar with J.M. Barrie's play "Peter Pan", but that we're incapable of understanding that this adaptation of Alan Knee's play "The Man Who Was Peter Pan", now three degrees removed from history, lives and dies by its conveyance of the idea that the dagger of make-believe is mightier than the mundane sword of reality. How better, after all, to tell the tale of the man who created one of the darkest, most brilliantly subversive attacks on the status quo than to return him to the land of storytelling and mythmaking? Forster seems to get it--the film looks ravishing and the casting of sprightly, ethereal Johnny Depp as Barrie is a stroke of genius, but both actor and director are betrayed by a project that side-steps the disturbing issues at hand in its suggestion of this Barrie's suspected paedophilic tendencies and his inability to grow up. "Peter Pan" is the shadow; the tedious and evasive Finding Neverland is the candle. The J.M. Barrie estate is upset that the film isn't accurate. They should be upset that it isn't very good.

Barrie is a bad playwright coming off a bad play. He's married to a dour woman (Radha Mitchell) whom he neglects. She's right to be angry, but there's no reason we're given to believe that she should hope to be treated otherwise: Barrie is a hero crafted entirely out of Teflon and pig grease--un-stainable, un-graspable. He neglects her because he wants to hang out with Sylvia Davies (Kate Winslet) and her four kids (filler, filler, filler, and Peter (Freddie Highmore)), imagining adventures in the park, campaigns against painted Indians, and bouncing on beds until they fly away into a magic-realist starry night. It's not so much Dennis Potter's astonishing riff on Lewis Carroll, Dreamchild, as it is a feature-length version of Joe Nussbaum's George Lucas in Love. Because this is the kind of film that it is, the mother must contact a period-piece disease involving a cough and a discreetly bloodstained handkerchief and have it flare up while little Peter, a playwright in the bud, stages his first backyard production. A deep sigh at this point is not just expected, but also the only appropriate response.

Barrie rubs Sylvia's stern mother (Julie Christie) the wrong way. He's from the wrong side of the tracks, has what is by everyone else's measure an unhealthy interest in other people's children, and is a writer for dog's sake. So even though she's right to abhor Barrie's lawlessness, she's made the heavy of the piece, and it will take almost the entire film for her to come around. Finding Neverland traffics in like convention. It's a picture in love with what's easiest, picking up the meet-cutes, precocious tots, and familial obstacles of the romantic-comedy genre and mashing them into the tragic illnesses, surprise grand romantic gestures, and "based on a story of a suggested by the"s of the romantic-tragedy genre. It gratifies the former audience because, I guess, that's still Johnny Depp's biggest audience decades past his heartthrob days--and it gratifies the latter audience because it wants to win some Oscars and nothing wins awards like a period romantic-tragedy around this time of year. Money and prestige: the same two things that drive Barrie in Finding Neverland. How lucky for him that he found true love instead.

Shot like a fable but unremarkable in every other way, Finding Neverland tugs at the heartstrings like a toe-fingered harpist, counting on the fact that the closer to the middle of the road it can get, the more likely it'll "crossover" and win a large mainstream audience unwilling to dip a collective toe into the icy drink. It's a cynical impulse and par for the course at Miramax, I'm afraid, which turns out prestige pictures with the annual precision of a metronome. (One does wonder if the casting of Dustin Hoffman--who played Captain Hook, of course, in Steven "Peter Pan" Spielberg's Hook--as a cash-obsessed theatre producer has some sort of ironic resonance.) The real conversation to have about Finding Neverland isn't how bland and inevitable it all is, but the sudden interest in Peter Pan between this and last year's excellent P.J. Hogan-directed live-action Peter Pan. Something to do with forgetting our lost boys, denying responsibility grown monstrous and untenable, and escaping into a reductive fantasy of a primitive, prelapsarian utopia... Eh, it's probably just a coincidence. Originally published: November 12, 2004.