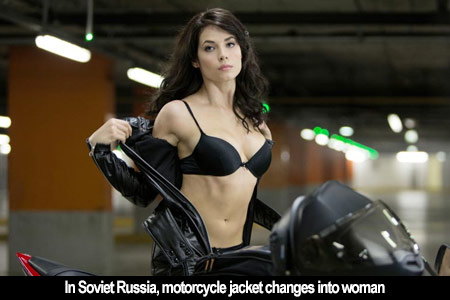 by Walter Chaw A Good Day to Die Hard (hereafter Die Hard 5), or whatever the fuck it's called, teaches that the only thing anyone seems to know about what's left of the Soviet Union is that something happened at someplace called "Chernobyl," and whatever that something was, it had to do with radioactivity. (Or Transformers.) It's a film that believes there's a magic spray that neutralizes radiation; that bringing up father issues is the same thing as depth; and that commissioning a screenplay from Skip Woods (the asshole behind Hitman, Swordfish, X-Men Origins: Wolverine, and The A-Team) is, hey, a great idea! Dreadful doesn't begin to describe it--and consider that I've liked, really liked, three of the previous four movies in this franchise, to the extent that the direction the last film took in suggesting the John McClane character is a Terminator felt to me pleasantly self-knowing, even brilliant. I wanted, desperately, to like this thing, but by the tenth or eleventh time McClane shook his grizzled head and muttered "Jesus" gravely under his breath (that is, around thirty minutes in), I checked out for good. Die Hard 5 is also the kind of movie that has its foreign bad guys speak English to one another even when they're alone; it features an extended, much-hyped car chase to nowhere with no sense of space or innovation before finally just settling on a series of explosions as lazy and disinterested as the way Bruce Willis fires off a million rounds nowadays. Apathetic isn't the same thing as cool, and Willis, let's face it, ain't trying anymore.

This one is about how supercop McClane's estranged son Jack (Jai "love child of Sam Worthington and Tom Hardy" Courtney) is a CIA operative trying to protect Russian something Komarov (Sebastian Koch) from Russian Piers Morgan Chagarin (Sergei Kolesnikov), because...I don't know. John, thinking Jack is a screw-up about to be imprisoned for life in Moscow instead of the more non-descript Felix Leiter he is, is in Moscow to watch Jack's trial (which he doesn't end up doing, for whatever reason) when lots of explosions happen during the world's worst-conceived jailbreak (a bad plan is one in which the object you're trying to save is at the epicentre of the boom-boom), leading to a car chase and witty banter along the lines of "You were never there for me JOHN" and "What's this John stuff? Call me DAD!" There's also tits-and-ass in the form of femme fatale Irina (impossibly beautiful--and good at chess, IMDb tells me--Yuliya Snigir), who has the thankless duty of delivering Skip Woods's idea of twisty-turny goodness not once, not twice, but thrice. And, just for the record, that thing they do with the helicopter and the bad guy at the end was done better in Willis's own The Last Boy Scout.

Say this for Die Hard 5, that even though it swaps out jive-talking chauffer Argyle for a Yakov Smirnoff taxi driver, at least it has the wit to make a Frank Sinatra meta-reference (remembering that the first Die Hard was based on a novel written as the sequel to Sinatra's The Detective). The rest of the movie is so mind-breakingly stupid, however, it's fair to wonder if the reference was intentional. Not helping is this Kingdom of the Crystal Skull-ism of having the son of the fossilized adventurer turn up as the corpse-like threat that there's a baton of some sort being passed here. There are only so many ways to talk about how awful it is--about how none of the scenes have any relationship to one another, or how the plot doesn't hold together for a moment and reminds, besides, of Transformers: Asshole's plot. The stunned screening audience I watched it with, after having their cell phones confiscated by the 20th Century Fox troops, wondered to a person what the studio possibly thought was worth recording of this mess and in jeopardy of being uploaded to an Internet that's already forgotten it exists except as meme fodder for Twitter. The Bowfinger parody of itself, A Good Day to Die Hard is every bit the disaster most people thought the last one was.

Walter is a phenomenal writer, but he could really use a grammar lesson.