A Glimpse Inside the Mind of Charles Swan III (2013) 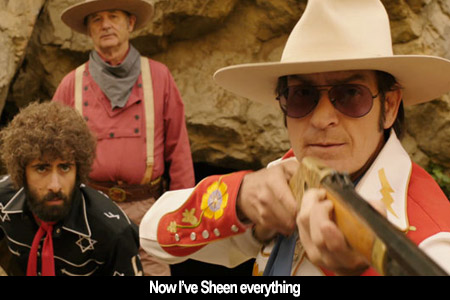 by Angelo Muredda Bill Murray's sad-clown deadpan is so ubiquitous now that it's hard to remember a time before he was the face of hipster melancholy. Wes Anderson and Sofia Coppola had a lot to work with in Murray's cracked mug, so you have to feel for Coppola's brother Roman, whose own project of redeeming an iconic face hits a snag right from the casting sheet. If A Glimpse Inside the Mind of Charles Swan III really is a tour through the psyche of star and one-man band Charlie Sheen, then the major takeaway is that there isn't much to see unless you're into incorrigible man-children on their best behaviour. It isn't that post-meltdown Sheen lacks the charisma to anchor a picture, but that Coppola, on rockier ground with his second feature after the much more aesthetically bold and thematically rich CQ, is serving two masters: his own whimsy; and his obvious desire to stage a career intervention for his friend, recasting the actor's overexposed mania as hangdog sadness--probably the last thing anyone wants to see Sheen embody.

The place where the two meet is the eponymous abyss of our protagonist's mind, probed in an opening tableau that finds his shrink peering into the collection of stilettos and leisure suits kicking around in Charles's skull. A graphic designer who perpetually squints through shades, Charles spends his days cruising through early-1970s Los Angeles while daydreaming scenarios where he dies and is mourned by all his friends and colleagues, especially recent ex-wife Ivana (Katheryn Winnick), who's left him after presumably putting up with a lot of bad behaviour. Beyond some garden-variety L.A. narcissism and substance abuse, we don't get a strong sense of what made him such a bad lover. Because Charles is more a vehicle for star rehab than a character, the cards are clearly stacked in Sheen's favour in a way that kills what little dramatic momentum this story can muster. Beyond the Gondryan set-up, we're left to run out the clock with amiable diversions marked only by inventive set design and extended cameos from Coppola family friends Murray and Jason Schwartzman.

As both CQ and his rich portfolio as a director of music videos for the likes of The Strokes demonstrate, Coppola has a knack for pastiche--which is to say that he should stick to shorts, where the carnivalesque can be more easily managed. Longform isn't really his style, and he can't sustain momentum even with help from comic touchstones Murray and Schwartzman, both of whom are happy to play second and third fiddle in someone else's sitcom but are clearly stranded in someone else's art project. There's also no real reason the film has to be a period piece except that Coppola's sister covered this ground so ably in the present-day Somewhere not too long ago; Coppola even serves up an awkward reminder of this via a Stephen Dorff cameo.

The structure is a bust, though the details are occasionally lovely enough to grant this one if not a pass, then at least a generous nod. It's a nice joke, for one, when we first spot a painting of fried eggs on the side of Charles's ride, and an even better one when the camera later tracks by the complementary strips of bacon on the other side. But Coppola's obsession with rolling out his paltry narrative in a procession of surreal set-pieces wears thin before long. At their liveliest, Charles's misadventures have a touch of the lived-in biography of "Curb Your Enthusiasm" about them, like his conversation in broken Spanish with housekeeper Lupe. ("How weird," he says, about the imported cat-feces coffee he's ordered.) At their worst, they're the stuff of an unaired Showtime pilot that has the gall to namedrop 8½ but not the follow-through to justify it.