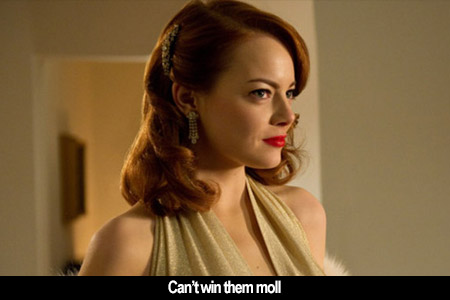 by Angelo Muredda In his recent chat with David Poland, Ruben Fleischer bristled at the suggestion that Gangster Squad shares any DNA with Warren Beatty's Dick Tracy. That's the sort of aesthetic family resemblance a lightweight like Fleischer ought to milk for all it's worth, but hear him out: Sean Penn's enterprising mob boss Mickey Cohen, he insists, isn't a cartoon bruiser in the tradition of Al Pacino's Big Boy Caprice, but a real guy whose face only looks a little off because it's been molded by other men's fists. He isn't a comic strip-grotesque, then, but a seasoned boxer-turned-kingpin reanimated by a grand old actor and his team of historically-faithful makeup artists. What more could one ask of a Warner Bros. crime movie than such attention to detail? A lot, apparently--especially if the finished product looks more like Elmer Fudd than any retired amateur boxer. Verisimilitude is a nice goal, but it doesn't suit Gangster Squad, at once a lumbering history lesson and a squib of a gangster picture--a zit on the ass of Mulholland Falls, Lee Tamahori's somehow more accomplished stab at L.A. noir.

Fleischer's hackneyed seriousness finds a curious match in former homicide investigator Will Beall's bloviating screenplay. While the souped-up trailers and kitschy title promise harmless exploitation fun (forever deferred by the haunting absence of a theatre-set shootout nixed in the wake of last summer's Aurora massacre), Beall fancies this a ground-level history of Los Angeles, surely born of his coyness about cribbing from The Untouchables in every respect but the setting. Cohen, we're told in beat cop Josh Brolin's stilted opening voiceover, rose up through his humble New York origins and bought his way to the top of L.A. through his "will to power." A characteristically grizzled Nick Nolte (star of the aforementioned Mulholland Falls), playing the last American police chief untouched by mob influence, goes even farther with this clumsy period sign-posting in the big speech that provides our flimsy narrative clothesline. His instructions to form the titular squad of bad-news cops in order to root out this "Eastern crook" and end a war for the city's soul already fought against the threat of "Indians and Mexicans" is yet another lesson, more halting than the first. Tempting as it is to grant Beall points for his basic fluency in Nietzsche and postwar ethnic shoptalk, these are the buzzwords of a self-enchanted screenwriter doing Local History writ large and tripping over basic exposition in the process.

You'd think that Beal's showboating would be in the wheelhouse of the director of the nauseatingly hyper-stylized Zombieland, but Fleischer seems not to have figured out his approach to what we might call The Dick Tracy Question. Too earnest to ironically indulge in the narrative's familiar pulpy beats and too uncertain about the strength of this material to play it straight, Fleischer aims for a muddled middle, jazzing up Beall's faux-hardboiled dialogue with slow-motion shootouts and shaky HD-cam pursuits that only remind us of how much better Public Enemies turned out. Miami Vice and Nine DP Dion Beebe can't decide if he's going for Michael Mann's minimalism or Rob Marshall's period bloat this time, and the result, strangely enough, is derivative of nothing so much as Cool World.

Although there's no discernible signature in Fleischer's work to date outside this sticky-fingered borrowing from more accomplished filmmakers, you can usually count on him to make decent use of his cast. Not so here. As the squad's most tender-hearted member, someone who only comes aboard when a shoeshine kid with a target on his back meets his fate at Cohen's hands, Ryan Gosling, too, seems on loan from better movies. He's a husk of his already-underwritten Crazy, Stupid, Love. character, his tentative romance with that film's co-star Emma Stone (dressed like Jessica Rabbit) impossible to invest in or even follow unless it's read as a continuation of that courtship in an alternate timeline. They're more listless this time out, but then, just look at what's around them.