**/**** Image A+ Sound A Extras C+
screenplay by John August, based on a screenplay by Lenny Ripps
directed by Tim Burton 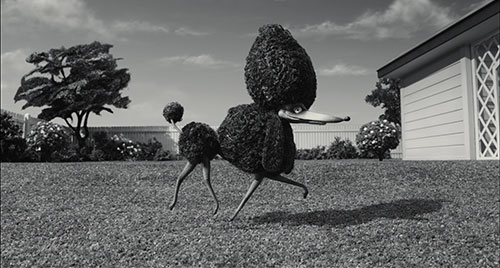 by Bill Chambers SPOILER WARNING IN EFFECT. Back in the early-Eighties, Tim Burton was part of the conveyor belt at the Walt Disney Company, cranking out artwork for films like The Fox and the Hound and The Black Cauldron. But drawing cuddly animals proved as bad a fit for Burton as it did for R. Crumb, and the studio eventually allowed him to separate from the pack, giving him a chance to hone his voice that was kind of unprecedented. Under the Disney umbrella, Burton produced two black-and-white shorts: the animated Vincent, a sweet and Seussian ode to his idol, Vincent Price (who narrated); and the live-action Frankenweenie, about a boy who uses mad science to bring his departed canine back to life. The latter scandalized Disney (too "scary," plus dead dogs and black-and-white have got to be roughly equivalent anathema to kiddie fare), and plans were shelved to attach the film to prints of Pinocchio in 1984. Three decades later, Disney confidently bankrolled a feature-length remake of Frankenweenie, stop-motion animated this time but still in black-and-white, and still with an undead dog at the crux of the narrative. What changed in the interim?

For starters, Tim Burton became a household name and his morbid sense of humour a brand expectation. Too, he recently directed Alice in Wonderland, the studio's highest-grossing live-action release to date, meaning Disney wants to be in the Tim Burton business whatever the catch. Sadly, audiences, either insufficiently desensitized to the concept by or perfectly satisfied with the original (long a home-video staple, often paired with reissues of The Nightmare Before Christmas), stayed the hell away from Frankenweenie '12, Burton's lowest-grossing film, animated or otherwise (even Corpse Bride, a movie with "corpse" in the title, earned almost double), since the underpromoted Ed Wood. Maybe he picked the wrong time to not cast Johnny Depp.

To his father's chagrin, Victor Frankenstein (voiced by Atticus Schaeffer) is an introvert who spends all his free time with his dog, Sparky. Frankenweenie begins as the short did, with a faux-super8 reel Victor's made of Sparky in a dinosaur costume saving a miniature city from a toy pterodactyl, foreshadowing a climax that is part Harryhausen, part kaijū eiga. Like his namesake, Victor is a budding scientist who's found a mentor in teacher Mr. Rzykruski (Martin Landau, cast as if Burton had the real Bela Lugosi at his disposal). After Sparky gets hit by a car, Rzykruski's demonstration of bioelectricity on a dead frog inspires Victor to try to revive Sparky during one of the town's mysteriously frequent lightning storms. The experiment works, though Sparky's a little the worse for wear: his tail has a tendency to wag right off, and water spews out the scars on his body every time he takes a drink. When he touches noses through the fence with the sleek black poodle next door, she gets zapped, leaving her with a shock of Elsa Lanchester hair. Still, Victor feels whole again, albeit compelled to keep Sparky's resurrection a secret from his creepy peers and judgmental elders.

Frankenweenie '84's plot expands like yeast to fill a 90-minute running time, but changes to the material abound. For starters, although Sparky's accident is recreated shot-for-shot, the circumstances leading up to it are radically different: Instead of Victor losing control of the ball that Sparky chases into the path of an oncoming car, he hits a homerun out of the park in a baseball game Mr. Frankenstein (Martin Short) forced him to play. A lesson in personal accountability and simple bad luck is distorted, then, to blame those twin bogeys for any sensitive boy: Dad and sports. For Burton, clinging too tenaciously to the outcast-as-avatar, to still be holding these grudges with the success he's achieved is a tad unseemly, and there is also the matter of the film's character designs. As much as I love "Bob's Burgers", one of the most consistently brilliant comedies on TV right now (animated or not), the fact that everybody on the show is a chinless grotesque means it's incumbent upon the dialogue to convey an individual's physical attractiveness or lack thereof. Similarly, Frankenweenie is so overpopulated with goth types, it seems incongruous that even pee-wee sports culture thrives among these people, or that any friction got a chance to develop between Victor and his father, doppelgängers of the same raven-haired, stringbean breed. (Proof that even when Burton's not working with Johnny Depp, he's working with Johnny Depp.) When Victor sneaks into the house after disinterring Sparky, his parents are watching Horror of Dracula of their own accord, contently.

Yet it's the film's slavish adherence to the original's conclusion that feels like its biggest misstep. In the short, Sparky perishes (again) rescuing Victor from a burning windmill on a miniature golf course, which was Burton's cheeky solution to restaging The Bride of Frankenstein's climax within the plastic confines of a California suburb. Victor's family and newly-penitent torch-wielding villagers band together to save Sparky by jump-starting him with their car batteries. Sparky comes back to life (again), but it's a happy ending that doubles as commentary on the rot festering at the fringes of the typical nuclear family. Alas, reprising this ending with the Addamses subbing for Ozzie & Harriet polishes the edges off it. Moreover, Mr. Frankenstein's consoling words to his son when Sparky first dies, about keeping the dead alive in your heart, take on the weight of a moral over the length of a feature, such that Sparky's ultimate survival is a disappointing act of cowardice akin to Trusty's last-minute stay-of-execution in Lady and the Tramp.

Mad props to Burton for shooting the picture in black-and-white like its predecessor, a fairly subversive gesture all things considered. It adds a loving note to the homages and a particularly esoteric one where the "Godzilla" sequence--a rampage of reanimated and in some cases bulked-up housepets dubiously arrived at via competing regressive Asian stereotypes, but anarchic fun in and of itself--is concerned: Burton remembers that Godzilla and the other defining entries in the giant-monster genre weren't really in colour, they just seemed to be. But it's not a new thing--nothing in this movie is, not for Burton, who already stomped Tokyo in Pee-Wee's Big Adventure. Sparky himself looks less like the spot-eyed bull terrier of the original than like a zippered version of the title character Burton designed for Brad Bird's "Family Dog", and if the first Frankenweenie was set in 1984 by virtue of when it was shot, this one's stuck there--or maybe earlier--because Burton is set in his anachronistic ways.

It's rare and can be rewarding when an artist revisits a past work: Both Hitchcock's 1956 The Man Who Knew Too Much and Leo McCarey's An Affair to Remember (which remade McCarey's Love Affair) demonstrate a mastery of medium as well as significant shifts in personal and cultural priorities, while George Sluizer's The Vanishing tailored his own Spoorloos to Hollywood sensibilities with a fascinating contempt for the entire exercise. Unfortunately, Frankenweenie only confirms the intervening ossification of an auteur; it's a remake of not one Tim Burton movie, but all of them. 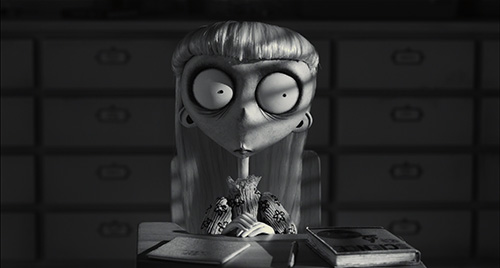 THE BLU-RAY DISC
Burton is barely present in the Blu-ray extras, as if that would be superfluous. "Miniatures in Motion: Bringing Frankenweenie to Life" (23 mins., HD) finds producer Allison Abbate de facto hosting a behind-the-scenes tour sprinkled with interviews. The ubiquitous Don Hahn, who's packed on a few since those Disney Platinum Edition DVDs, takes credit for pitching the project to Burton; does he still have a parking spot at the studio? I liked seeing close-up and in colour the meticulously-fashioned props, many of which were painted "wrong" to photograph better in black-and-white. "Frankenweenie Touring Exhibit" (5 mins., HD) pimps the eponymous show that started out in Barcelona and as far as I know continues to make stops around the globe. Abbate and Hahn are again centre-stage. The Plain White T's cover the Ramones' "Pet Sematary" in an elaborate tie-in video, suggesting the song was once featured in the film, perhaps over the closing credits instead of Karen O's "Strangelove" (a melodical mashup of the Depeche Mode song and Mickey & Sylvia's "Love is Strange," though lyrically more of the same from the hipster Raffi). Obviously the finished product was incompatible with "Pet Sematary"'s nihilism ("I don't want to be buried/in a pet sematary/I don't want to live my life/again"), and that's too bad.

The original Frankenweenie (30 mins.), starring The NeverEnding Story's Barret Oliver, Shelley Duvall, Daniel Stern (all thanked in the credits of the remake), and Sofia Coppola (!), is included, unfortunately in SD/1.33:1. If this release didn't spur a remaster/restoration, I suppose nothing will. Finally, Captain Sparky vs. the Flying Saucers (2 mins., HD) is an "all-new Frankenweenie short" directed by Mark Waring, emphasis on "short." Mr. Whiskers resurfaces, though, so it's not a total loss. Frankenweenie itself docks in a gratifying 1.85:1, 1080p presentation with nuanced contrast and incredible dynamic range. Not to mention superfine detail: Every overgrown hair on Mr. Whiskers's face and body is countable and tactile. It's the monochrome equivalent of ParaNorman's lush colour transfer. I'm only slightly more guarded in my enthusiasm for the attendant 7.1 DTS-HD MA track, which impeccably renders a mix that realizes a long-held dream of hearing Universal horrors and atomic-terror flicks in state-of-the-art sound. Sometimes Danny Elfman's score gets too competitive, however. Trailers for Oz the Great and Powerful, Wreck-It Ralph, and...drumroll...The Muppet Movie's Blu-ray debut cue up on startup. We received for review the 4-disc combo pack, featuring Frankenweenie on the currently-unplayable-by-us Blu-ray 3D format in addition to DVD and Digital Copies of the film. 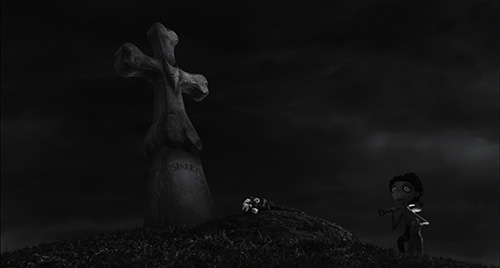