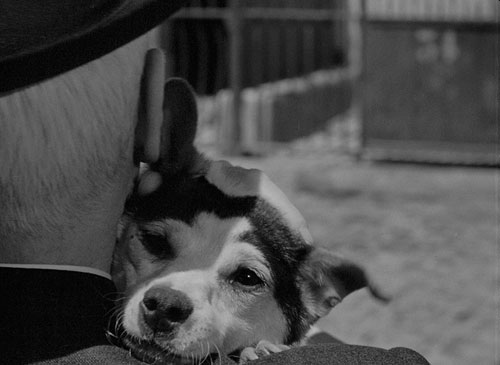 by Walter Chaw Though he's best known for The Bicycle Thief, Vittorio De Sica's Umberto D. is, to my mind, the superior film, and ultimately one of the few pictures I've ever revisited from the era of Italian Neo-Realism--a movement I've never particularly understood nor, indeed, liked. It's possible that there's not much to understand, that as a reaction to the execution of Mussolini and during that brief "Italian Spring," Italian cinema, freed by necessity from the studio and looking to present a more authentic representation of the country's broken cities (film critics were to blame for the movement, of course, as they would later be for the French Nouvelle Vague), found non-professional actors to play out social melodramas. I wonder if I've always bristled at the notion that the Giuseppe De Santises and Luchino Viscontis produced during this time were anything like "realism" as I understood it; when I was first introduced to American films noir, I had no idea they were as stylized as they were because of an attempt at "realism," too. Whatever the case, I see Umberto D. as something like an early Fellini, like La Strada or even 8½: There's something that feels very much like a humanistic solipsism at its middle. Which is so much more interesting than the cries for social equality that inevitably turn to plaintive keening in my ear. Sometimes liberals damage their own cause--long-held close-ups of crying children have a way of doing that.

Umberto (Carlo Battisti)--given his single middle initial in the title to evoke Kafka, perhaps--is an aging pensioner on the verge of eviction at the hands of his evil, bourgeois landlady, Antonia (Lina Gennari). His friends are a dog, Flika, and fifteen-year-old maid Maria (Maria Pia Casilio), who reveals to Umberto that she's pregnant by one of two soldiers, neither of whom wants much to do with her. Broke, unable to find work, too proud to beg, and without the means by which to secure any kind of loan, Umberto gets sick and put in hospital, and once he's out again, he finds his apartment empty, his dog lost, and that he's well and truly out of options.

A brief interlude where Maria wakes up to a cat walking across her skylight indicates that De Sica is a stylist more interested in Dickens than in Kafka. Another scene, with a hand-truck ferrying a cage of doomed dogs to their death, is more heavy-handed than lyrical, true, yet it lands with the same sort of stylized intent. The moments that work best in the film are those that feel most unrehearsed: the agony of a little girl promised a dog and disappointed by a mean nanny, or the humiliation of Umberto when he's forced to panhandle, thinks better of it, and awkwardly has his would-be mark pretend to not know that Umberto is in trouble.

The problem with the film is its willingness to descend to broad manipulation. De Sica uses the dog and his dog-eared score to bludgeon the audience into not just tears, but acceptance that letting an old man die, penniless, homeless on the streets with only an adorable mutt for a companion, is wrong. Much better is the relationship between Umberto and Maria. His genuine befuddlement (Battisti had a tough time remembering his lines, rewritten daily) marries well with Maria's scary vacuity. She's obviously doomed, directionless, rudderless, and a clearer representative of a moral orphan than Umberto. It's bad that there's no welfare state for the elderly, sure, but it's worse that there are no social programs to protect average children like Maria from bourgeois monsters like Antonia and the opportunistic, vacuous young men in her life. Casilio's performance is frighteningly empty. When she feels her stomach and a tear rolls down her cheek, it's so carefully constructed a tableau, so wilful and artificial, that it actually works. When Umberto D. isn' t doing smash-zooms or noodling around with our emotions by making our hero fall down a long, long well for its duration, it works a great deal like the better post-neo-realist Italian films from the likes of Antonioni. Seen as a bridge, Umberto D. has legs; it may all be worth it for the moment where an old friend mouths "dead?" as he's carried away on a bus, into the magical-realist future.

THE BLU-RAY DISC
The Criterion Collection brings Umberto D. to Blu-ray in a lovely 1.37:1, 1080p transfer. Quoth the insert, "This high-definition digital transfer was created on a Spirit Datacine from the original nitrate camera negative," and the contrasts are as stark and the detail as crisp as you'd hope from nitrate stock, even if there's occasional evidence of digital clean-up on a source that must be in a fairly advanced stage of decay at this point. Sometimes the grain is noisily resolved and whites can clip at the upper end of the spectrum, but the image is nonetheless highly filmic. That's important. The "original monaural soundtrack," meanwhile, "was remastered at 24-bit from a 35mm optical track print," meaning that it lacks a great deal of depth, especially at the highest and lowest ends. The LPCM 1.0 track is more than adequate for the material, however.

The pamphlet inset also includes a defense of the picture's unabashed mawkishness by critic Stuart Klawans--who says, essentially, that the only thing better than a tearjerker about a tired old man is a tearjerker about a tired old man with an adorable terrier--as well as excerpts from a De Sica interview about how he was eager to make Umberto D. because he wanted to do something real and authentic. Rounding out the booklet is an interesting little reverie from linguistics professor Battisti about the thin line between his real and screen lives. The disc itself features "That's Life: Vittorio De Sica" (55 mins., HD), a special from Italian television that is basically the equivalent of a TCM fluff piece: career overview, film clips, plus lots of surface narration and context provided by the director hisownself. It's fine for what it is, though it did cement in my mind De Sica as Italy's Frank Capra. "Maria Pia Casilia" (12 mins., HD) is a cool interview with the late actress from 2003 in which she reveals that she had never seen a film prior to appearing in Umberto D. and negotiated a large payday for her debut because she was hoping they'd say "thanks, but no thanks." A remastered trailer for the film, in HD, finishes off the presentation. 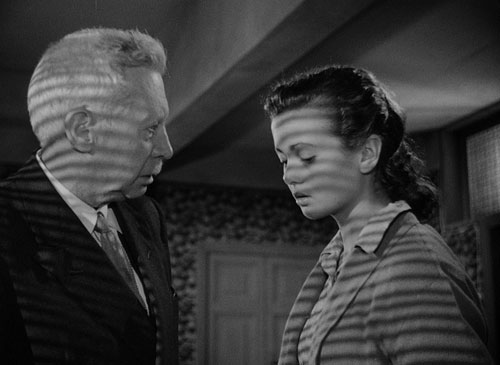 To each his own, then.

Of all the neo-realist films I've seen so far, this one is by far the loveliest.

Spare, economical in both image and dialogue, Umberto D. is one of the finest hymns to humanity that movie making has to offer.

Did not feel bludgeoned by anything - sight or sound.

As far as "The Death of Mr. Lazarescu", the less said the better.