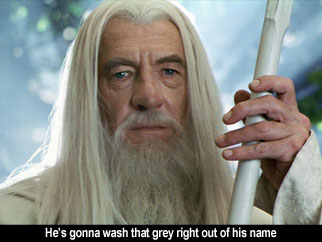 by Walter Chaw Suffering from the problems inherent in split narratives, Peter Jackson's The Lord of the Rings: The Two Towers (hereafter The Two Towers), at least for its first half, is disjointed and overreliant on a familiarity with not only the first film (which is essential), but also the Tolkien source material. Furthermore, the first cracks in Jackson's conversance with CGI begin to show in the entirely animated Gollum character (a creature that bears an uncanny resemblance to Steve Buscemi), and too much time is given over to characters standing around looking at digital phantoms. Unlike its predecessor (The Fellowship of the Ring), The Two Towers feels too long by half despite the elision of key scenes from the source tome; the picture only picks up during its last ninety minutes, and then only as an unusually well-crafted action spectacle largely lacking in the nuance, pathos, and sharply-drawn characterizations of the first film.

Its story either well known or hard to explain, heroic hobbit Frodo (Elijah Wood) and his friend Sam (Sean Astin) continue their quest into enemy stronghold Mordor to destroy the One Ring of Power in the fires of Mount Doom. Meanwhile, human Aragorn (Viggo Mortensen), elf Legolas (Orlando Bloom), dwarf Gimli (John Rhys-Davies), and the reincarnation of Gandalf the Wizard (Ian McKellen) try to rouse the men of Rohan to battle at fortress Helm's Deep and (meanwhile again) hobbits Merry (Dominic Monaghan) and Pippin (Billy Boyd) try to rouse Treebeard (Rhys-Davis) and the Ents of Fanghorn (called "tree herders" at one point, they're essentially animated trees themselves) to rise up against evil Saruman (Christopher Lee) as a literal Birnam Wood.

When the somewhat desperate exposition of the first half of The Two Towers gives way to the setpieces of the concluding half (the midpoint clearly delineated by a superior Warg-rider attack), the film becomes extraordinarily effective. Jackson's grasp of space and scale is breathtaking (the siege of Helm's Deep by an army of ten-thousand armour-clad creatures crosscut with a forest of Ents attacking Saruman's obsidian tower is indescribable and deliriously impossible), but the difficulties of adaptation begin to wear on the overall feeling of the project. The Frodo/Sam/Gollum story not nearly as involving as the visceral bombast of the Helm's Deep line (itself softened by a pair of sickly flashbacks meant to flesh out the love affair between Aragorn and the elf Arwen (Liv Tyler)) nor the awe and humour of the Ent storyline, a certain impatience manifests itself as an urge to indulge in frustrated, mocking laughter.

Wood's performance suffers the most as his Frodo character begins his decline into madness, his scenes with Astin marked by a level of discomfort not entirely attributable to the inherent discomfort of the situation. Gollum (voiced and "performed" by Andy Serkis) engages in a schizophrenic dialogue that works as a nice bit of foreshadowing (for both later events and the suggestion that Frodo is on the same path as the benighted creature) but stalls the forward motion of the film almost fatally. Saddled by the weaknesses of the printed word, in other words, Jackson does his best to balance the schizophrenia of Tolkien's novel with his own sense of narrative momentum. His desperation to smooth the choppiness of the story and format is palpable in the short-selling of the Wormtongue (Brad Dourif) character (and Aragorn's horse who, without much in-text warning, becomes a key character) and the desire to infuse heterosexual romance (with both Arwen and Miranda Otto's Eowyn) into Tolkien's sexually sterile universe.

Still, what works about The Two Towers works superbly. The sweeping Christian allegory of the first film becomes a canny WWII metaphor complete with a powerhouse nation of sleeping giants, a stronghold of resistance bombarded by an overwhelming fast-attacking enemy (an enemy, like bellum Germany, with a strong industry base and weapons development program), and a once and future king (like Churchill, believed by many in wartime England to be the reincarnation of Arthur) who gives his nation hope in its darkest hour.

Without nagging time-lapse problems, a few sloppy matching shots, central questions glossed (Gandalf's resurrection--without a reading of The Silmarillion, of course--is obscure at best), and a few story conveniences (Cate Blanchett's Galadriel makes a lame cameo, the abovementioned gauzy Arwen love scenes), the film would be something of a masterpiece (and even with its problems, it's among the best fantasies ever made). As it stands, The Two Towers is a deeply conflicted picture that soars when it works, and plods along sincerely when it doesn't--a dark, violent, frightening vision of a world in transition with the acts of a heroic few deciding the destiny of all. The scale is right, it's the minutia of the execution this time around that gives pause. Originally published: December 9, 2002.