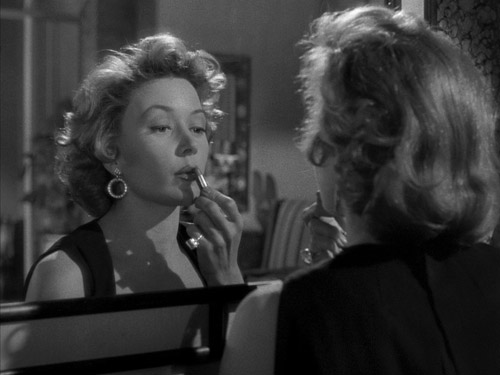 by Walter Chaw The pinnacle of Fritz Lang's American noir output, The Big Heat vacillates between hard-bitten and surprisingly tender. A movie of dualities, it positions Glenn Ford's Det. Sgt. Bannion on the liminal borders between dialectic states: he presents a familiar hardboiled veneer on the one side, a broken, exhausted, eventually devastated family man on the other. The picture partitions noir bodily, forcefully into the margins of the gender divide, and it confronts, full-on, the popular conception of the '50s nuclear family. It appears fully formed, an irritant to the hegemony of the American myth of nuclear/consumer nirvana, and it suggests that the cultural upheaval that would result in the helter-skelter '60s started showing its fatigue early. The Big Heat is Rebel Without a Cause, except the mother is killed and the gay kid lives.

It's essentially modern, then, the product of Lang's already dark, paranoid sensibility--made darker by his struggles with HUAC, which somehow translated a strident stand against Nazism as an implicit sympathy with Communism. Although he was only "blacklisted" for about six months before being rescued by Harry Cohn at Columbia and given a two-film contract, the ordeal--the testimony, the indignity--served to validate the worldview under which Lang had laboured since the 1920s. For Lang, HUAC was proof that the only thing that ever changed was the name the oppressors gave themselves. The whole of his ethos is expressed in the giant "Give Blood Now" poster that greets his penitents at the entrance to The Big Heat's police station.

The first image of the film is of a standard-issue .38 snubnose, picked up and used offscreen. The head and upper torso of a man falls forward into the frame, onto a desk. In a different age, a pool of blood would stain the blotter; we mentally insert it. A wife appears, the first of two wives in The Big Heat. This is Mrs. Duncan (Jeanette Nolan), and she's neither terribly shocked nor terribly sad that her husband has just stepped off the carousel. The dearly departed is a corrupt cop who's left behind a confession that fingers, essentially, everyone at the station. Mrs. Duncan spirits it away before upright Det. Bannion (Glenn Ford) shows up for the requisite post-mortem interrogation. It's all a formality. We've almost forgotten that someone else was called first, a lackey for gangster Mike Lagana (Alexander Scourby).

Soon enough, Bannion is tipped off that nothing is as it seems and no one is to be trusted--that the only safe place is at home, with his adorable daughter and his doting wife, Katie (Marlon's older sis, Jocelyn Brando). Bannion is offered sanctuary in The Big Heat, but his outrage causes him to gamble it and, in a loaded sequence, he accidentally knocks over his daughter's wood-block police station (that she's malapropped as "It's just like you, daddy" instead of, presumably, "Just like where you work, daddy") and snaps at his ever-patient wife, then sends his wife to her doom in a car-bomb explosion meant for him. A prototype for the revenge films that would crop up in the early-'70s, most specifically those in the tenor and character of Don Siegel/Clint Eastwood's Dirty Harry, The Big Heat finds Bannion turning in his shield and engaging in a holy crusade against the men who killed his wife.

Julie Kirgo's very fine essay included in the keepcase for Twilight Time's Limited Edition Blu-ray release of The Big Heat correctly reads the picture as a diary of the cost women pay for Bannion's single-minded lust for vengeance. The main victim is plucky moll Debby (Gloria Grahame): Attached to lizard Vince Stone (Lee Marvin) for "expensive" laughs, she decides, after Vince puts out a cigarette on hapless B-girl Doris (querida Carolyn Jones), that she might help Bannion in his blood quest. This, after we put one-and-one together and figure out that a murdered girl from earlier, Lucy (Dorothy Green), whose corpse was tossed from a car and found riddled with cigarette burns, was the victim of a "sex murder" and the same "psychopath." What Kirgo doesn't examine with regards to women in the film is that The Big Heat treats them almost traditionally (despite allowing Katie to drink and smoke; despite its frank depiction of prostitution and good-time girls) in suggesting they are the primary "check" that balances the innate bestiality of men. Without Katie, Bannion becomes uncivilized. He renounces his profession, gives over his child to his in-laws' stewardship, and becomes torturer, judge, and executioner. Without Debby, Stone loses his position, too; already on the wrong side of civilization, he loses his freedom.

The violence in The Big Heat remains savage. The scene where Stone disfigures Debby with hot coffee is all the more effective for Lang's perverse interest in the villain's chiselled cruelty over Debby's agony. Consider Katie's death, a father-daughter moment that makes a whiplash transition to a frenzied, failed freeing of a corpse from a burning car. Katie, the second wife of the film, is now rhymed with not the inconstant, unfeeling Mrs. Duncan but rather B-girl Dorothy, whose corpse has been likewise extracted from a car. Fascinatingly, this now pairs Bannion with the corrupt cop whose death opens the piece. In a very real way, something of Bannion has died--when he submits, somewhat, to Debby's attempts to seduce him, he becomes paired with Stone; and at the end, when Debby pairs in death with Katie, he returns to himself. Bannion, like all men, is defined by his most recent object choice.

The ending, read by Lang biographer Patrick McGilligan (Nature of the Beast) as bittersweet when Bannion resumes "business as usual" and accepts his shield and position again, is predicted by his "marriage" to his corpse bride and the stability she represents. It's bittersweet because Bannion's agreed to honour an ideal that's already proven to be a lie and lifeless besides. The Big Heat is about accepting hopelessness as the one, true existential state. When Debby delivers that classic throaway line upon seeing the furniture-less home Bannion used to share with his family ("Hey I like this: early nothin'"), I can't help but think back to the slimy barkeep (Peter Whitney) dismissing the girls who "work" in his bar as "suitcases full of nothin'." What you see at the end of The Big Heat isn't resolve--it's resignation. Two years later, Robert Aldrich defines nihilism as the central mover in noir with his Kiss Me Deadly, though it was already swirling there in the middle of The Big Heat. 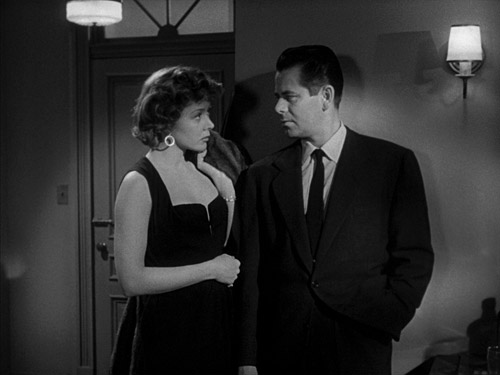 THE BLU-RAY DISC
Twilight Time's Blu-ray contains a very fine 1.33:1, 1080p presentation of The Big Heat that ramps up the clarity and sharp contrasts of Charles Lang's (no relation) black-and-white cinematography. For what it's worth, I peeked at the various versions available for streaming online, and they are simply no substitute for this crisp, fine-grain image. The 2.0 DTS-HD MA mono track registers low on my system, but as it's even throughout, there isn't a lot of scrambling to adjust the volume once it's amplified. An optional isolated musical score is one of those extra features I never really understand (it must hold some appeal for soundtrack fetishists), while the theatrical trailer, in native HD, rounds out the disc-based supplements. As mentioned above, Kirgo's insert essay is fantastic--I would have loved an audio commentary from her. For the record, in addition to McGilligan's book on Lang, I recommend reading Vincent Curcio's biography of Grahame, Suicide Blond. Anyway, The Big Heat is awesome.