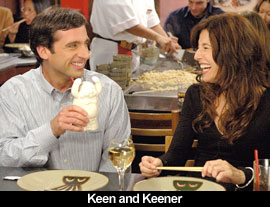 by Walter Chaw You should go just for the spectacle of Elizabeth Banks masturbating in a bathtub, but the real surprise of the piece is the disarming understanding that the usual Greek Chorus of man-friends giving bad advice seem to spring this time from a piquant desire to recapture something of their own lost youth. With a title like The 40 Year Old Virgin (and with a marketing campaign that borders on genius), you know that, as with other "losin' it" pictures (Losin' It, Revenge of the Nerds, Hardbodies, The Last American Virgin, and on and on), the hero's going to get laid--most often to a fireworks accompaniment (or selections from Hair, as the case may be). The only question is if he will get there via the respectable, wife/long-term girlfriend method or bust his cherry against some kind of Tara Reid-esque trollop. But what elevates The 40 Year Old Virgin beyond the same old musty sex-quest flick is the feeling that at its heart it believes there is actually something precious about chastity--even when its preservation has slipped past pathetic. The film is essentially sweet-natured and occasionally insightful about the ways that men never really grow up; small wonder it was co-written and directed by one of the co-creators of "Freaks and Geeks".

Andy (Steve Carell), the titular maiden, is a tech manager at a Circuit City-like electronics boutique who so desperately needs to get laid that the only one of his co-workers who actually talks to him, Cal (Seth Rogen), suspects he's a serial killer. It's soon apparent that Andy, with an apartment full of action figures--mint in mint-condition boxes, natch--and decorated, sometimes inexplicably, with stuff like Asia and Doug Henning posters, is living every guy's secret dream (except for the lack of sex, of course)--moreover, that the film is aimed at an audience composed of people with an extremely high pop-culture quotient. It's American Psycho with one fewer chainsaw, a picture that uses the theme song from "The Greatest American Hero" with the same kind of deadpan irony reserved for quiet references to collector culture and the kind of video gamer who owns a specially-designed chair expressly for that purpose. When Andy is invited to a poker game desperately in need of a fifth, he lets slip that he's never touched a woman's breast ("It feels like a bag of sand!") and so inspires his hale cohorts (Cal, Jay (Romany Malco), and lovelorn David (Paul Rudd)) to make a project of him. An encounter with a shellfish-stricken lush (Leslie Mann, director Judd Apatow's wife), a bookstore nymphet (Banks), and a speed-dating montage lead Andy to the door of single-mom Trish (Catherine Keener), a woman for whom Andy has enough feelings to have his chest waxed in a scene of suffering so profound that it's destined to become legendary.

The 40 Year Old Virgin is at least twenty minutes too long in the current fashion of comedies, but until it loses steam, Carell's easy charm and Keener's effortless grace smooth over Apatow's flat direction and unimaginative blocking. The film is static, almost theatrical for long stretches--so much so that there isn't much momentum from one set-piece to the next. But what works is the same thing that worked with "Freaks and Geeks": there's a certain wisdom about how the awkwardness of inexperience is an indelible stain no matter how seasoned the sensitive soul becomes. Most of us have at least the desire to be a forty-year-old virgin, and Andy's embarrassment in trying to hastily read the instructions on a condom wrapper on the fly rings a little more poignantly as a consequence. Flavoured with nice Apatow touches like the casting David's late-lamented ex-girlfriend, without comment, as an East Indian and the sly insertion of Asia's "Heat of the Moment" into the soundtrack as the payoff to a visual joke, The 40 Year Old Virgin, for a good ninety-minutes or so, is a smart contribution to a stupid genre. It's a comedy about loss, literally and figuratively, and its hippy-dippy conclusion, not to put too fine a point on it, feels a little like a fond send-off for an entire generation. Originally published: August 19, 2005.