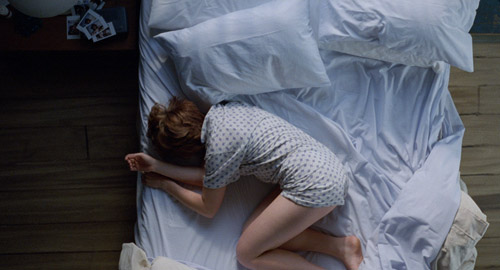 by Jefferson Robbins The title, in retrospect, is an indictment. Danny Boyle's debut feature Shallow Grave made a splash both in the UK and abroad, but his flatmate protagonists are so thin and hastily sketched, their interfaces with the world beyond their stylish fourth-floor walk-up so glancing and limited, that even the inevitable comeuppances for their bad behaviour don't interest us much. When three striving young Edinburgh roommates happen into a questionable cash windfall and run afoul of brutal gangsters and nosy coppers, the real marvel is that we're buffaloed into caring by some forthright performances and by Boyle's visually striking helmsmanship. The characters' motivations beyond the suitcase MacGuffin are pretty much absent: They're fatally shallow, with grave consequences. Boyle misdirects us away from these concerns, already hinting towards the vertiginous risks he'd take two years later with Trainspotting (there's even a creepy animated baby, of a sort), and his cast is frighteningly talented and appealing. Yet it's hard to shake the notion that we've unwrapped a prettily-wrapped gift package containing nothing but socks.

Audiences are obviously meant to hate newspaper scribe Alex (Ewan McGregor, in his worst hairstyle until Star Wars: Episode I - The Phantom Menace), doctor Juliet (Kerry Fox), and accountant David (Christopher Eccleston), but their cynical energy invites a certain amount of suture upon encountering the film in one's youth. (Old folks, good luck summoning anything beyond mild dislike.) The three twentysomething professionals are great friends, an impenetrable clique, though the circumstances that brought them together are a mystery. University chums? Let's go with that--although Juliet's career would've demanded an extensive postgraduate education. What rings true is their level of mutually-reinforced self-involvement, the kind of bunker-building you indulge in with your newly-adult cohorts. Anyone not in your circle, when you're between drinking age and roughly twenty-eight years old, is obviously unworthy of it. "Normally I don't usually meet people, unless I already know them," David tells the trio's only dinner guest, and that's as much a confession as it is a contemptuous, testing barb.

The roomies seek a lodger for their spare bedroom but subject each applicant to heaps of causeless ridicule until the broad-shouldered Hugo (Keith Allen) turns up. Juliet, who meets him solo, is intrigued by this itinerant who claims to be writing a novel--and so are we: Allen injects a brief charge of humanity the main cast isn't allowed to display, and his interplay with Fox dangles promise. Just like that, alas, he's dead in his room of an apparent heroin overdose, photographed like Boyle's own Death of Marat, leaving behind a suitcase so stuffed with money that we're never actually told how much is in there. If the three survivors want to keep it, supercilious assholes that they are, their only hope is to dispose of Hugo's body rather than report the death. Repressed David draws the short straw, not to mention a dose of bullying from Alex, to mutilate the body beyond recognition--which should really be the job of the only medical professional in the group, but by now I'm just shrugging at my flatscreen. I'm old, you see.

Boyle and screenwriter John Hodge view this adventure in dismemberment as the tipping point of avarice, where humanity yields to base cruelty, since it's David who undergoes the deepest transformation. Alex and Juliet are little more insufferable than before, but David moves in with the hidden money to become a sort of Grendel in the attic. This strategic perch is to the trio's advantage when Hugo's former associates (Peter Mullan and Leonard O'Malley, practically wordless) come calling, but it doesn't ease the domestic tensions. The film steps sideways by ditching the conflict with the gangsters in a hurry, where we might have hoped for an extended cat-and-mouse game between hardened enforcers and the young urbanites who've bitten off more than they can chew. Instead, it's happy to cling to its three players, alienated from each other and, thanks to bizarre character choices, increasingly alien to the viewer. At least in Trainspotting, drug addiction stands as a believable cause for such badly-deformed behaviours--although it's hinted that David is already in therapy for some unresolved mother issues. Alex, David, and Juliet's bubble invites popping, and we relish incursions like Hugo's or that of threateningly offbeat Detective Inspector McCall (Ken Stott). These are the beats that enliven the deadly flat as it threatens to become a very pretty snowglobe. 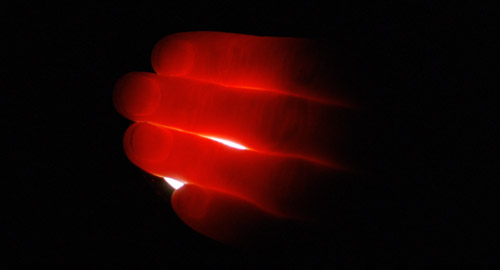 The treat, really, is twofold, in seeing Boyle's signature rave-inflected style manifest itself and in seeing three prime actors crackle with youthful strength. Fox, the headliner by virtue of her past association with Jane Campion in An Angel At My Table, is a crystal-eyed manipulator with a Charlotte Rampling air about her, inviting approach but ultimately unknowable. (That said, Juliet dresses like a tremendous frump.) Eccleston, who'd captivated in Let Him Have It, gives over to an authoritative slow burn that would later serve him (and Boyle) well in 28 Days Later.... His role may be the most challenging of the three. McGregor, the only true unknown at the time, is asked to capture and hold most of the audience's attention with a fountain of narcissistic palaver, and he succeeds. Boyle's camera, guided by DP Brian Tufano (Quadrophenia), pursues them productively into the shadows, shooting Eccleston amid a stunning forest of light shafts from the holes he's drilled in the attic floor. The best statement of the director's aesthetic, though, comes when Juliet and Alex lash an expensive camcorder to the roof of a remote-controlled toy car. Twenty years later, all his movies hold echoes of that brief, chaotic lo-fi footage. While he's hailed for his deployment of music, Shallow Grave shows Boyle has a fine ear for melody but not lyric import: Nina Simone's version (still the best) of "My Baby Just Cares For Me" lopes wonderfully through a montage of the flatmates coming to grips with new wealth while Hugo ripens in his bed, but the words have nothing to do with the images. Ditto the triumphal Andy Williams pine-fest "Happy Heart" at the close. Boyle is using these tunes for their rhythm, not for any statements they make; perhaps that's why he's most comfortable with techno.

THE BLU-RAY DISC
If Criterion's 1.85:1, 1080p curation of Shallow Grave can't quite make us fall in love with its callow pro/antagonists, it can fill us with lust for their magnificent flat. Kave Quinn's elevated, £750,000 Glasgow-built set, with its buttermilk kitchen, lemon-lime sitting room, and plum entry hall, looks almost edible. The transfer, overseen in part by Tufano, maintains its clarity and firmness of image even in the many darker scenes, without any hint of edge enhancement. The source is clean, too, lacking scuff or blemish but maintaining a gentle sheen of warm grain, and the points where colours burst up to take over the screen--blood reds, deep-forest greens--are only as lurid as fits the moment. Reflecting the original sound design, the 2.0 DTS-HD MA track is less forceful than students of Boyle's later pictures may expect. The electronica blasts from Leftfield that bookend the flick get proper treatment, as does Simon Boswell's repetitive score, but the former are far more lively and memorable than the latter. It's wordy, this script from John Hodge, and the audio on this disc makes certain every piece of dialogue rings through clearly.

Over on the first of two film-length commentaries, Boyle, recorded in 2009, tries to isolate the youth appeal of his debut feature. "It was a British film about people of this age. They wanted to see something irreverent, violent, black as coal, and funny--about their lives, really, and about what they were feeling." It's a sentiment echoed elsewhere in the supplementals, which note the depressed aura of British film in the early '90s. (Shallow Grave "wasn't bleak, it wasn't grey, it wasn't about social realism and the embitterment of the British condition," Fox says in the cast interview featurette.) Much of Boyle's talk is an appreciation of the shifting landscape in his own creation, the push-pull of relationships between his three characters. Impishly, he points out that two of his stars went on to science-fiction iconhood--McGregor as Obi-wan Kenobi and Eccleston as an iteration of Doctor Who--and then discusses the "TARDIS-like" dimensions of the kind of Edinburgh New Town flats on which his set was based. The director spent a pre-production week living in such an apartment with his three main actors, developing the fellow-lodger intimacy that serves the performers so well in the finished film.

On their own yak-track, Hodge and producer Andrew Macdonald nod to the American indie explosion that followed Blood Simple and sex, lies, and videotape as the roots of Shallow Grave, and indeed, Blood Simple does feel like kin in its reductive noir and overall look. They set out to finance the work with a handful of non-corporate investors but soon won attention--and money--from Channel Four. Hodge, trained as a physician, was still working at his day job while production went on (intermittently showing up for his scenes as McCall's junior detective partner), and says he had to fax rewrites over from the hospital. He takes slight issue with contemporary reviews that called Shallow Grave's characters "repellent": "At the time, I sort of ignored that or didn't agree with it, but I can sort of see where that's coming from now." This commentary sometimes contradicts Boyle's, as when Macdonald denies there was ever a stack of real cash used as an onscreen prop; Boyle recalls renting the actual sum of one-million pounds for the kitchen-table conspiracy scene, and the cast interviews support him.

Those interviews (29 mins., HD) are quiet but incisive sit-down affairs with Fox, Eccleston, and McGregor, all of whom obviously look back on their participation with great pride. McGregor properly calls out Alex as "a wanker" and says he enjoyed the chance to crystallize a character who seemed to represent elements of the Scottish youth of the day. Fox points to Juliet's essential quality of aloneness, keeping unseen suitors at bay and herself equidistant from two male roommates. Eccleston in particular is good at putting Shallow Grave in a sociohistorical context, saying its lush apartment set became the target of greedy house-hunters: "The very thing that we were satirizing--desire for property--came back and bit us." One component brought to light herein is the physical toll on the actors, not least on Eccleston, who for one crucial segment had to keep cold, nude company with actual dead bodies and severed heads. All these sacrifices, all this dedication... They make me wish I liked this movie more.

Macdonald, his brother Kevin (later the director of Touching the Void and The Last King of Scotland), and Hodge took the script to the 1992 Edinburgh Film Festival looking for funding, and kept a "Video Diary" (9 mins., HD) of themselves doing ambush interviews and pitches. Charles Gormley, Robbie Coltrane, and Christopher Lambert all offer advice, as does Sam Fuller, who sadly isn't very audible here. The young filmmakers daydream aloud about casting Sean Connery (why?!) and at one point manage to get him on the phone while he's shooting Rising Sun in Los Angeles. Kevin Macdonald also shot the contemporaneous promotional documentary "Digging Your Own Grave" (30 mins., HD), on board for the completist. The three-minute Shallow Grave trailer is included in HiDef, as is a two-minute teaser for Trainspotting. Film writer Philip Kemp contributes the de rigueur Criterion essay in the insert booklet, diving into archival print sources and helpfully pointing up a few connections unexplored in the video materials. 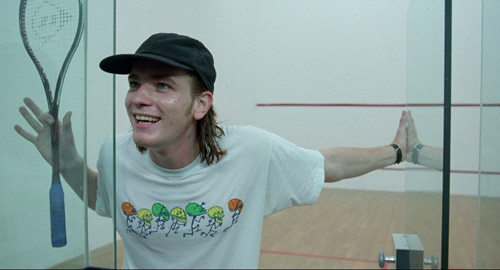 I dunno. TINY FURNITURE? Maybe down the road, in the wake of "Girls," Dunham's film would've merited the curation. At least with SHALLOW GRAVE, yes, the justification probably lies in the body of work that followed. That other is just inexplicable to me.