by Walter Chaw What begins as something romantic and mysterious ends as something predominantly memorable for the impact it had on Dido's wan career. Charting the WB's "Roswell"'s downward trajectory from a piquant, lovely pilot to the worst of "The X Files" and "Dawson's Creek" is a fascinating, instructive thing to watch--not only for the schadenfreude of it all, but also for the way that corporate perception of what an audience purportedly wants invariably leads to production of the same kind of dull crapulence over and over again. (Though, in the WB's defense, a grassroots letter-writing campaign that saved the series from oblivion at least once indicates a fervid devotion to this kind of garbage.) In the fine tradition of making a self-pitying clone of "thirtysomething" for teen-somethings played by a cast of twenty-somethings, "Roswell" is "Sweet Valley High" mixed with the Troll Books variety of soft-core science fiction, making that "My So-Called Life" feeling of middle school alienation literal in its tale of three or four actual aliens getting teased by jocks in Roswell, NM. It's the love child of Robert A. Heinlein and Judy Blume, and it ain't pretty.

Centre-stage is shared by Liz (Shiri Appleby, allegedly human) and Max (Jason Behr, allegedly breathing), the former a human waitress at a tourist dive diner, the latter her main Martian squeeze, who saves her in the pilot by passing his hand over a bullet wound and causing the "ouch" to go away in a flash of E.T. luminescent healing. Max's little green sister is tall blonde Isabel (Katherine Heigl), their best friend and requisite James Dean scoundrel is Michael (Val Kilmer look-alike Brendan Fehr), and for the first sixteen episodes the three form something of a big-eyed trinity, seen holding hands on the box set's brown cover art and occasionally on the show as well. As the trio struggles to figure out what their powers are (a conceit explored with more meaning in the WB's puberty opera-cum-freakshow Smallville), producers Jason Katims (of "My So-Called Life" fame) and David Nutter (of "The X Files" fame) take great pains to make the grammar-school connection between their extra-terrestrial struggles and the struggles of all sensitive, alienated teens.

And therein lies the problem: It's a specious conceit made thinner by the rigours of plotting a 22-episode season undertaken not by a visionary like Joss Whedon (remembering that even Whedon couldn't sustain "Buffy The Vampire Slayer" through its final season), but by a pair of marginal talents who, when all else failed, fell back on the contrivances and cheats that failed them so well on their previous series. So "Roswell" is full of long looks and crowded-high-school-hallway slow-motion (making light, Max says in episode thirteen (the ironically named "The Convention") that "Whenever I see her, everything goes into slow-motion"), complicated delayed romantic relationship choreography, and enough Men in Black "mythology" to tempt even the devoted to gaze longingly at the freedom promised by the remote control. Without first establishing a reason to care, "Roswell" attempts to establish tension, and because it has one foot in teensploitation, its means towards tension is mainly the on-again/off-again puppy love between Max/Liz, Michael and Liz's hippie pal, Maria (Majandra Delfino), and eventually Isabel and dork with a heart of gold Alex (a brilliant Colin Hanks, son of Tom). The requisite cop is Sheriff Valenti (veteran character actor William Sadler), the cop's kid is Liz's ex Kyle (Nick Wechsler), and when the tension isn't going so well on the love front, the series shifts inexorably to the sheriff on their trail (then the Feds on their trail when the sheriff gets stale), to the trademark "X Files" paternalistically racist confab with preternaturally wise Native Americans, and worst, to the uncomfortable machinations of bizarre love triangles.

Oh, and Isabel gets immaculately impregnated by a wet dream--maybe.

Yet before "Roswell"becomes what "MADtv" once brilliantly parodied all WB shows to be--"Pretty White Kids with Problems"--it begins with something of a bang, its pilot episode full of marvellous little moments that capture the outsider hipness of The Lost Boys when you're fifteen. A moment where Liz marvels that through a lip-triggered Vulcan Mind Meld she's able to see herself through Max's eyes ("And in your eyes, I'm beautiful") is genuinely touching in the way that only good genre material can be (reminding briefly of Dan Simmons's "Eyes I Dare Not Meet in Dreams"), and the first encounter in the Crashdown Café (the series' Central Perk), where Max heals Liz, is breathless and full of promise. The pilot episode is the best indictment of the rest of the first season as anything: fun, exciting, romantic, well-balanced, and focused on the grand, all-consuming concerns of high-schoolers on the cusp of real responsibility. I'm not entirely certain when the show goes south, but south it goes, starting as early as the second episode.

"Roswell" derails entirely for the final five episodes of the season, running out of steam in its love stories as it tries to establish a global intrigue involving hidden alien threats that our central threesome (now foursome with the addition of Tess (Emilie de Ravin)) are probably here to combat. The final shot of the first season is actually sort of good in a schlock B-movie way as lights come on across the world, indicating a mobilization of the bad E.T.s as they're alerted to the presence of the whiny brats we've come to know and loathe. Before that tiny sizzle of genre kismet, though, the series goes for action/thriller in the sad tradition of what goes wrong with any number of high concept speculative shows: infiltrating top secret headquarters, breathless rescues, mysterious metallic orbs, accidental murders, and noble sacrifices. At the end of the meltdown, the only thing to emerge relatively unscathed is Sadler's curiously affecting turn as the Sheriff who loves his son more than his work--and, of course, young Hanks might actually have a future in the screen trade. The case of "Roswell" is a good cautionary tale, and a good example of the failure of heart and mind that dooms nifty ideas to the embarrassment of cultural curiosity. It's this generation's "The Greatest American Hero", which was that generation's "Shazam!": camp calamity finding a home in just another pretty face without a thought in its airy little head. 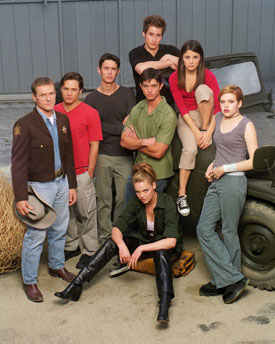 THE DVD
Because no sad misdeed goes unaggravated, Fox DVD presents "Roswell: The Complete First Season" with six commentary tracks, one for one episode per disc. The first yakker is for the pilot, with executive producer/writer Jason Katims and executive producer/director David Nutter going on about their brilliance and the things that their past experiences brought to the table. "Pilot," regardless the inanity of the endless casting anecdotes and self-congratulations, remains sans commentary the sole unambiguously good thing about the first season. Nutter returns for disc two's "Blood Brother," the middle of a decent story arc in which Hanks's Alex character is asked to cover up for something involving his friend that he doesn't understand. Though he doesn't offer anything interesting, Nutter does agree that Hanks has a nice, natural quality. Co-executive producer/writer Thania St. John chimes in on disc three for "The Balance"--an episode that exacerbates the already-embarrassing Native American/Earth child stereotypes--and again provides not much more than plot rehash and pleasure.

Disc four offers Appleby and Delfino expounding at length on "Sexual Healing" (possibly the most disgusting episode in the series, with enough face-sucking to honour "Roswell"'s place in the Alien pantheon), and they comport themselves like giggly schoolgirls--"oh gross" this and "oh gross" that--with a few anecdotes about looking a fright in wardrobe, weird practical jokes that they're surprised no one laughed at on set, and moony reflections on how cool Colin Hanks was to work with in a completely platonic way. Slightly amusing is how Appleby often expresses exasperation with her character, and how Delfino confesses that she often messed up her line readings. The twosome are back for "Crazy" on disc five, the episode that introduces alien #4, Tess, and they still do a stunning imitation of what it would be like to accidentally tap into a fifteen-year-old's cell phone chatter. Katims and director Patrick Norris chime in for the last disc's "Destiny" with nothing new to report, though after the aggressive inanity of the last two tracks, the general inanity of this one feels like a revelation. The track might be interesting for some for the lengths to which the two talk about the difficulties of the scheduling and budget of a weekly speculative series, but I somehow doubt it.

The final disc also includes a pair of documentaries. The first, "Area 51: Behind the Scenes of 'Roswell'," (30 mins.), presented without chapter stops, is an opportunity for Katims, et al to continue to talk about their backgrounds and what they bring to the table of this unique Abercrombie & Fitch meets E.T. experience. Katims goes so far as to describe the series as a "Romeo and Juliet" thing, extending the metaphor into modernity and, hey, even absurdity. Hanks in full beard is almost unrecognizable, the rest of the cast is unfortunately unchanged, and all of them spend all of their time talking about how great the other was. If they ever make a movie adapting what high school kids sign to one another in yearbooks, there's a prototype for a screenplay right here--"Stay sweet, next year we'll rule the school!!!" "Roswell High: The Making of Roswell" (10 mins.) is the story of book editors Laura Burns and Melinda Metz as they wax euphorically about how they met and realized that they could churn out cheap juvie melodrama like the teen books this television series was apparently based on, revealing that Pocket Books approached them with the premise and their alchemical magic did the rest. It's revenge of the stay-at-home mom set, and a few shots of the stray page now and again are all one need know about the kind of writing that we're talking about here. It's hard to watch, let's leave it at that.

Two audition reels for Emilie de Ravin are no better or worse than any single scene from most of the episodes, and a "Save Yourself" music video by something called Sense Field is vanilla porridge, lukewarm, starring Appleby. (Yeah, we're still talking about the video.) It bears mentioning that new songs by artists not charging as much for royalties have replaced most of the songs used in the original broadcast versions of the show. As I never caught this show in its original incarnation, I can only go by the observations of fansites and a brief disclaimer on the back of the cardboard slipcover that says "Includes new cutting-edge songs selected by the original 'Roswell' music team!" (Spin doctors: alive and well and living at Fox.) The show looks just like a television show produced and released circa the 21st century, and sounds the same: bright, unimaginative, clear. Appreciated is the 1.78:1 presentation, however--just makes it look a little classier, even if the framing and compositions are purely primetime. The Dolby Digital 5.1 mixes for each episode are mostly front-channel affairs, although occasional atmospheric clatter decorates the rears at least once per segment. The season is presented on six dual-layered discs in individual wafer cases, all slotted into a cardboard slipcover. Originally published: June 1, 2004.