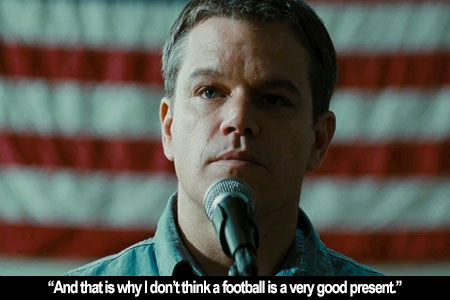 Damon is Steve BUTLER, a rep for a giant gas-mining company tasked with inculcating himself in small communities with his aw-shucks good looks and his grandpappy's work boots. His partner is tough-talking Marge Gunderson-type Sue Thomason (Frances McDormand), just doing her job, ma'am, and their antagonist is greenie activist Dustin NOBLE (Krasinski). Damon is a servant and Dustin is a saint--get it? Try to keep up, dummies. It seems that Butler isn't telling the simple folk of Backwoods, Asswhere that the way evil gas companies extract gas is through the controversial "fracking" process, which could, potentially, poison their land at the same time it's not making them rich. That said, Butler is a goodly sort of fellow who only needs to see the wrong of his doing to stop stumping for The Man. Dustin, on the other hand, should be arrested he mugs so much. He mugs in a redneck honkytonk on karaoke night (what?), and he mugs while speaking to hot schoolmarm Alice's (Rosemarie DeWitt) class of impressionable tots. And then it's revealed--in the world's dumbest, most poorly-thought out reveal--that Dustin may not be what he appears to be, causing Butler (and this is only a spoiler if you're an idiot, I swear to God) to come to a crisis in a public setting! What will he do? And did you know that Alice has a big garden in her giant backyard? It's her kinfolk's farm; she couldn't let it go to seed.

Promised Land will be called well-intentioned by patronizing people and a diatribe by those who want to attack it. What it actually is is the product of powerful people who can ramrod an under-baked thing like this into existence simply by offering to defer their salaries. There's a conversation, a serious one, to be had about fracking, about the machinations of energy corporations, about capitalism--but it's rich that these wealthy white guys think the best way to go about inspiring debate is by presenting straw men at play in the heart of hicksploitation U.S.A.. The dialogue is deeply embarrassing and the plot--meandering around a meaningless love triangle, ignoring anything like humanity in its hasty sketches posing as characters, and painting all of it like the first two stanzas of any John Cougar Mellencamp song--likewise. The truth is, Damon and Krasinski, probably smart guys, are likely trying to dumb it all down to "trick" us ordinary folk into a sermon--less persuasion and appeal to intelligence than a timeshare pitch posing as a free vacation offer.

Consider the moment where Noble explains to us halfwits who Athena is to diagnose exactly how early the script is in its development and how no one cared enough to go back to the typewriter for one more pass. Or consider Hal Holbrook's role as a retired genius teaching high school because he wants to (but later confessing that he needs money to make ends meet in Bumblefuck, Mayberry, pop. uncles raising nephews of brothers lost in the Iraq!), who exists exclusively to explain what the issues of the film are--because, frankly, you won't get it unless a high-school teacher tells you (but don't worry, he didn't always used to be a high-school teacher). The big twist doesn't work the way it wants to and the big emotions are...haha, stop it. The saddest part is that Damon and DeWitt have real chemistry, but Damon's playing an affable nitwit and DeWitt's playing a plot point, and that, as they say, is that. It's Mitt Romney in blue jeans, this Promised Land, and we've all had enough of that.

Why would a Liberal say so indeed. Of course, they wouldn't, that's the point. A Conservative expressing such sentiments ABSOLUTELY - no-ifs no-buts - means that he's an unthinking rube.

The obvious question is, how is a Leftie doing as a Leftie does supposed to be a misrepresentation of Lefties?

Oh and BTW, it doesn't take a Conservative to find the 'I'm rubber, you're glue' mentality oft displayed by Liberals to be distinctly unappealing.