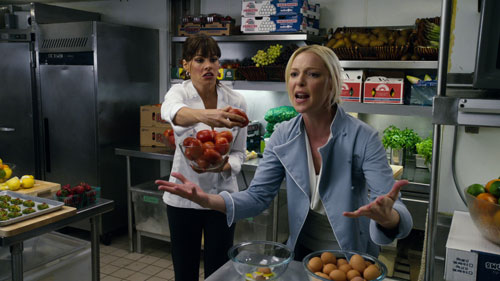 by Jefferson Robbins Refining the Hollywood gravity well--the kind of cinematic drain-spiral that A-listers and aspirants can't not be in--he first manufactured with Valentine's Day, Garry Marshall's New Year's Eve hinges for me on the thought that Robert De Niro got paid at least seven figures to literally lie in bed. The movie feints at the larger symbolism of the holiday: A progression forward in light of what's come before, the passages between immaturity and adulthood and life and death. But this is a romcom from the godfather of the modern romcom, albeit a too-long one that's neither very funny nor very romantic, and it ultimately takes its importance from the infantile imperative to kiss somebody, almost anybody, at midnight when the year turns. If you don't, you're worth nothing.

It's a colliding-stories movie that's learned nothing from Robert Altman, save that colliding stories are a great way to shoehorn more actors--these cast members playing deep, deeeeeeep inside their comfort zones--into your film. So after a launch montage that introduces a December 31st Manhattan where nobody's breath ever fogs, we meet frazzled Claire (there's always a Claire; this one is Hilary Swank), whose job is to supervise the 2011 Times Square ball-drop. On the other side of town, frazzled Laura (Katherine Heigl) is catering a swank New Year's Eve ball despite the upsetting presence of her rock-star former fiancé, Jensen (Jon Bon Jovi, seventeen years Heigl's senior--his music and visage proving that both "Slippery When Wet" and Moonlight and Valentino were a long time ago). In a depopulated record-company office, Ingrid (Michelle Pfeiffer, mousy'd up in an attempt at de-glamming that merely makes her look like Isabelle Huppert) quits her shitty job and hires callow messenger-boy Paul (Zac Efron, truly not looking like himself), who's roommates with New Year's Eve Grinch Randy (Ashton Kutcher) and brother to overprotective mom Kim (Sarah Jessica Parker), to squire her in a juvenile quest to fulfill a swoony bucket list of sorts before midnight. She's not dying, though--that's De Niro, melting from cancer in a hospital room he specifically chose (money being no object when you're in a Garry Marshall movie) for its great rooftop view of the ball-drop, acting only from his chin up and assured by Dr. Cary Elwes and Katherine Fugate's script that he won't live past this very night.

There you have just a few struts of this Goldbergian contraption. Kutcher, with his unreasoning hatred of New Year's Eve, gets trapped by an elevator outage ex machina with fluttering chanteuse Elise (Lea Michele), who talks/sings him out of his doldrums in a cross-borough duet with Bon Jovi. (The two singers will later deliver your mom's favourite version of soul chestnut "I Can't Turn You Loose," under the theory that they're worthy to hold the respective jocks of Carla Thomas and Otis Redding.) From a wedding party in far Connecticut, wealthy young professional Sam (Josh Duhamel) suffers a car crash en route to the city, where he's trying to meet some mystery woman who rocked his world last New Year's Eve. Kim's daughter Hailey (awkward-phase Abigail Breslin) wants to meet her budding boyfriend for a midnight kiss at Times Square, much to her mother's chagrin. Griffin and Tess (Seth Meyers and Jessica Biel) check in to deliver their offspring and fall into ridiculous competition with another couple (Til Schweiger and Sarah Paulson) for a $25,000 "first New Year's baby" prize.

These gyrations are nudged along by that abominable romcom-character subspecies: the second and third bananas who exist only to further the protagonists' destinies. Claire is somehow best friends with Ludacris (not playing himself), there to remind her she can light the big ball despite acrophobia. Teenage Hailey has a cafeteria table full of friends encouraging her midnight assignation, suggesting YouTube videos on how to kiss, and yet they're not making fun of her. Nurse Halle Berry is around to hold De Niro's hand unto the twilight--the only supporting character with any glint of external life and longing, and that provided in the most ass-backwards way. Sofia Vergara and Russell Peters are Laura's chorus of ethnic fabulosity, hired to Charo their "accents" to the rooftops. (Vergara, a Colombiana, delivers Bon Jovi a plate of enchiladas, a Mexican foodstuff. I'd shrug it off except the movie is so blind to its own cultural privilege that it crosses over into hostility.) Sam gets an entire RV full of ridiculous little helpers (Yeardley Smith, Jack McGee, some child actors I'd like to punch) who want nothing more than to get him to his year-in-the-making date.

It's awful. Did I mention it's awful? Not that I expected it to be great, but sometimes I still reel from the knowledge that humans will finance, create, and then consume actual garbage. The funniest word in the universe, if we take New Year's Eve as some holy text, is "vagina." Just the word, the saying of it, freed from context, especially when a chubby gay male nurse phrases it as "vajayjay"--hilarious. The concept of a single human being living happily outside a heterosexual pair bond is...well, it's just so outlandish as to be unspoken. Pfeiffer stays a spinster but still nets the youngest arm-candy for the all-important midnight smooch; Heigl's caterer is compelled to repair her ruined relationship rather than sweep it behind her; and Parker's diagnosis as a smother-mother stems strictly from her manless state and no other evidence whatsoever.

Nor do men escape: Kutcher is healed by Michele's caterwauling, and as he flees the church Duhamel is told soundly, "There's someone out there for you!" Meanwhile, Swank's Kim is urged towards a reunification with dying Dad in the most cryptic possible terms, in order to preserve one of the film's Big Reveals about who's related to whom or which two players will hook up. Even the wholly uncaring blooper reel under the end credits is just more marketing, with Biel passing twin copies of Valentine's Day on Blu-ray and DVD through her hoo-ha (i.e., vagina). The winners aren't you or me--it's the glutted machine that created this film and the uncountable companies or entertainment franchises advertised all over its Times Square marquees. Congratulations to Toshiba, UFC, and Sherlock Holmes: A Game of Shadows. 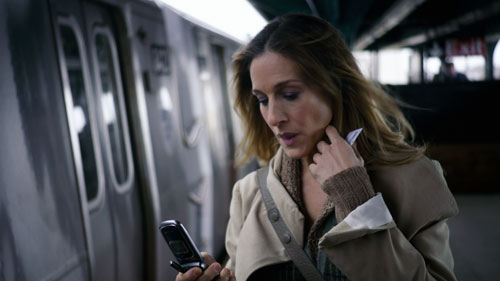 THE BLU-RAY DISC
It looks good, you can say that for Warner's 1.78:1, 1080p Blu-ray release, but then I'm told the Antichrist will look like a young Sam Neill. It really is a near-flawless video presentation, showing up a crisp, bright Times Square in the daylight scenes and splashing out all the festive colours you'd expect of a Manhattan New Year's Eve at night. You can even tell whose roots haven't been done in a while. (It's Heigl.) Charles Minsky, chief DP of some of Marshall's biggest hits from Pretty Woman on, keeps things vibrant and balanced, but in HiDef some of his more obvious choices are shown up as...well, obvious. De Niro and Berry chat quietly in his hospital room, he spotlighted icy and grey, she filter-lit like a Hawaiian sunset--death and life, get it? It would make a good test disc, though, what with its gentle fleshtones and impressive dynamic range. Soundwise, the 5.1 DTS-HD MA spread doesn't have much to work with, relaying clear-as-a-bell dialogue and distributing the unambitious noise field with diplomacy. The viewer is always kept attuned to the forefront characters, not their environments, even when their environment is Midtown on the noisiest night of the year. It's TV sound design is what it is, a movie recorded for people used to having a volume control in their hands.

I think they gave Marshall a feature-length commentary just to avoid shelling out for an audio track for the visually impaired. The director says nothing that isn't screamingly obvious from what we're looking at. He's a ringmaster and a game-show host, not a raconteur: "There's a friendly face!" he trumpets. "It's ZAC EFRON!" Bon Jovi is heralded as "certainly one of the great singers of our time;" De Niro "one of the great actors of our time and of our country." Which is to say that Jon Bon Jovi is the Robert De Niro of crotch rock and middle-of-the-road faux-R&B, I guess. Every star gets an introduction, but to be fair, so do the subordinates and several non-speakers. Every scene gets a thorough description of what's going on, who's on camera, whether you're looking at a set or a real apartment... He even introduces the Warner and New Line logos, for God's sake. To steal a march from The AV Club's Commentary Tracks of the Damned feature, here's the commentary in a nutshell: "You need to add in a little conflict, so now the elevator breaks down."

For lead featurette "The Magic of Times Square" (6 mins., HD), friendly magic otter Ryan Seacrest, avuncular tyrant Michael Bloomberg, and the film's stars and creators blurb the importance of the yearly event. Skip this. "Jon Bon Jovi and Lea Michele Rock New Year's Eve" (5 mins. HD) finds the two performers and producer Don Was putting together the mutilated songs dispersed throughout the movie. The only surprise is Bon Jovi's assertion, maybe recognizing his age, that until he was lured in by Marshall he thought he'd never do another movie. "I get to play a singer in a rock band," he says. "Big stretch." Then there's "Deleted Scenes with Introduction by Garry Marshall" (17 mins, HD)--oh, God, he's back, explaining what a deleted scene is. Turns out John Stamos was almost in the movie, but escaped nearly intact. You can watch the cuts without Marshall's doddering introductions, which removes nine minutes from the runtime.

"Gag Reel" (11 mins., HD), again introduced by Marshall (oy, another full minute), replicates many of the outtakes found in the closing-credits sequence, sees Efron chewing out a paparazzo, and only redeems itself when Duhamel finally does pop one of those kids in the RV. All these features are helpfully subtitled, though if you're watching any of them longer than thirty seconds, you need more aid than that. The accompanying DVD comes with the film onboard and no special features at all, plus a digital download option if you want to go on the Internet and announce what a sucker you are. A menu icon indicates BD-Live capability, but the thing sat there and spun dumbly until I had to restart the disc. Spinup ads promote the WB Insider Rewards program and Rock of Ages, which looks similarly star-bloated and horrific. Consider giving the package as a gift this year to someone whose taste you question. 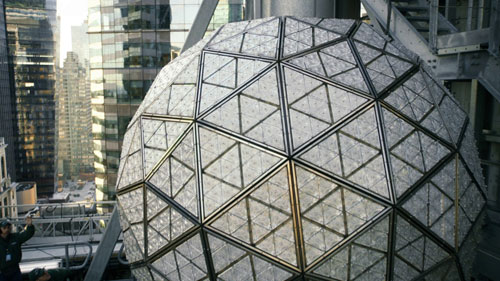