by Jefferson Robbins Fairytale is the oldest way we know to exorcise trauma or repurpose it to didactic ends. The moving image, probably the newest. So Marcel Carné's Les visiteurs du soir (literally, The Night Visitors, though its international title is The Devil's Envoys), created in France during a period of repression equalled only by the Terror, pulls both tricks. It's a film, therefore it's not reality, but it's also shaped as a magical courtly romance and set in a distant past where romances were both entertainment and cultural transgression. Gilles (Alain Cuny) and Dominique (Arletty) are figures out of a medieval fresco or some monk's illuminated pages, from Gilles's suggestively forked mullet to Dominique's graceful, benedictory poses. The two are minstrels on horseback in 1485--when troubadours carried news, gossip, and forbidden literature from one feudal estate to the next, singing songs of organic, passionate love for nobles trapped in arranged marriages. A long way from Vichy France, under the Nazi occupation, yet either world offered death as punishment for dissent, and both found succour in art that trespassed boundaries.

The pair's first transgressive act, approaching the court of Baron Hugues (Fernand Ledoux), is Dominique's costuming as Gilles's brother. In fact, the two are former lovers, and, more, they're enlistees in the Devil's army of tempters, sowing discord throughout the mortal world. This court is ripe for provocation, as the Baron's dreamy daughter Anne (Marie Déa) prepares for her wedding to the domineering Renaud (Marcel Herrand). Once in the court, Dominique's unconvincing drag tests sexual boundaries as she catches the eye of the lustful Renaud as well as the mournful Hugues while still clothed as a man. For her part, Anne faces a future of submission and sublimation under Renaud, and she's vulnerable to Gilles's seduction by song--just as we're vulnerable to Carné's magic, with his camera gently closing in on the future lovers. A chord from Dominique's lute is powerful enough to freeze time in the midst of a courtly dance; from there, the wedding's off.

So here are the ministers of Art, injected into a sterile, class-crystallized environment--but they're also the heralds of magic, who can do seemingly great good (Gilles restores a trained bear to life) yet are programmed as agents provocateurs of the heart. They stir unbidden feelings, challenge the status quo, and force those they touch to revise their relationships to each other and to their world. The temptation here is to see Hugues's castle as the society of occupied France--a depressed shell (Hugues) at its head, offering the nation's innocence (Anne) to a war-hungry suitor who will oppress even its dreams (Renaud), with Gilles and Dominique representing dualistic poles of the creative drive that will liberate it on a subconscious level. Art is a bastard, though. Anne sees a future in her love for Gilles, who loves her in turn despite himself, but Dominique, as her name implies, seeks sadistic control. Art is often seen as the work of the Devil, and Dominique is her father's daughter.

That's one reading invited by the first hour of Les visiteurs du soir, although it's complicated by the materialization (out of a burning bush) of the Devil himself (Jules Berry), intervening when Gilles declare his love for Anne. His servants may arrest time and transform flesh, but the Devil traverses time and space, appearing everywhere at once to further the collapse of Hugues's realm. He's a spark of energy and malice in what's becoming a stately fantasy-romance, and if we're bent on interpreting the movie as an allegory of wartime occupation, he ups the stakes. (His coming also obviates the trio of malformed dwarfs who, in earlier scenes, act as a wonderfully creepy clown-chorus to the envoys' seductions. They're among the film's strangest, most dreamlike elements, and after they vanished, I missed them.) Is the Devil the true foreign invader, while Gilles and Dominique represent native elements of the culture already in play? Is he Hitler, and the two envoys merely his local governors, susceptible (to one degree or another) to the charms of the land they've conquered?

I suspect it was at this juncture that Vichy censors gave up and rubber-stamped Carné's film for release, where intellectuals spotted a rallying point to champion it as a Resistance-minded parable. That's the trick of a fairytale: everyone sees the surface facet that most reflects their values, while the tale as a whole hints at other dimensions. This is how a culture nurses its wounds and secretly builds an invisible monument to love in a time of war. In the film's closing transformation, the monument becomes literal. 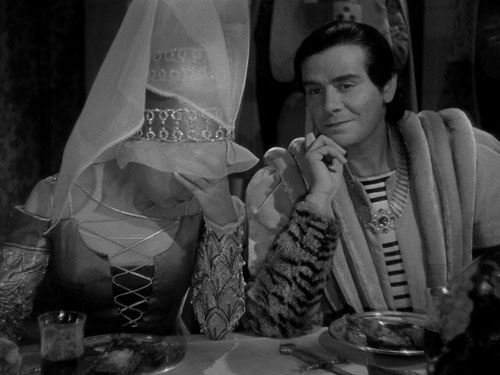 THE BLU-RAY DISC
I tire of trying to find flaws in the last several Criterion Blu-rays I've assessed, so let's just say that Les visiteurs du soir's 1.33:1, 1080p presentation won't erode the company's legacy of top-notch curation. It's not merely an issue of crispness or sharpness in the black-and-white image, however--Carné recognized that in filmic lexicon, soft-focus equals romance, so this remastering must also bow to his gauzier, dreamier moments. This it accomplishes. The blinding bleach-white (actually yellow) of Hugues's castle, the depth of his long banquet hall, the glimmer of tears in Déa's eyes, the textures of Georges Wakevitch's costuming (the tunics and tights of grand stage plays and ballets)--all are balanced and beautiful. The print has been cleansed of all but the most obtrusive flecks and scratches, and these minimal intrusions have nostalgic warmth. The LPCM 1.0 mono soundtrack is clear and unmarked by distortion or hiss. When Cuny sings his otherworldly odes to Déa (penned by Joseph Kosma), it's remarkably deep.

If there's a complaint, it's the limited extras. No scholarly commentary track here, as the film might deserve, though the onboard documentary, "The Adventure of Les visiteurs du soir" (37 mins., HD), touches on the historic points of the film's making. Lined up as talking heads are film historian Alain Petit, journalist Philippe Morisson, screenwriter and Carné associate Didier Decoin, and archivist André Heinrich, a friend of Les visiteurs screenwriter Jacques Prévert. Carné narrowly wriggled out of a contract with collaborationist studio chief Alfred Greven in favour of a more positive partnership with producer André Paulvé, and cycled through a number of potential projects--an adaptation of "Puss in Boots", a Jacques Spitz novel, a van Gogh biopic--before settling on an original script from Prévert and Pierre Laroche, drawing on the illuminated 15th-century religious tome Trés Riches Heures des du Duc de Berry for visual inspiration.

Caught between collaboration and a life without cinema, Carné had a Hobson's choice, Petit says: "Not making films was the real crime. Not making films was death." Death was certainly a possibility for Kosma and art director Alexandre Trauner, Jews who had to disguise their crucial involvement in the project. Having longtime film and cabaret star Arletty in the retinue proved invaluable, as her friendship with the daughter of Vichy head of state Pierre Laval allowed certain...leniencies, shall we say. Although Decoin describes Carné as an anti-Fascist, even a Communist sympathizer, Petit says he doubts any allegory in Les visiteurs du soir was intentional on the part of its makers. The final disc-based extra is an original trailer (4 mins., HD), which flickers like a charming nickelodeon reel and hails Alain Cuny as "the discovery of the year." I'd vote for his hair in that category. Lastly, a booklet essay by film commentator Michael Atkinson connects similar historical dots and, like this review, refuses to commit to any one allegorical interpretation. 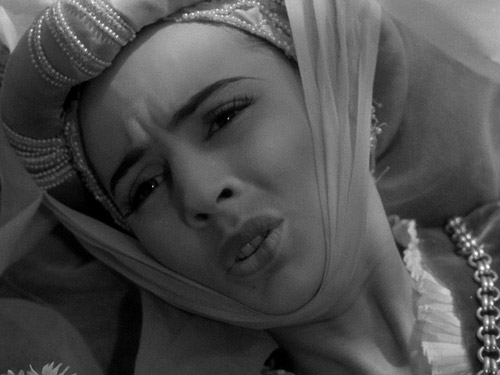