January 1, 2010|The last year of the first ten or the first year of the next ten, 2010 finds the state of our motion pictures as an awkward, yearling thing, finding purchase in the aftermath of the fear and nihilism of the post-9/11 state in something as dark but perhaps now more purposeful than despairing. If the best films of the immediately-after are represented by stuff like No Country for Old Men and Synecdoche, NY, the best films of this liminal year are pilgrims in search of a (doomed) idea of perfection and the dreadful cost of its pursuit. Is that explanation in part for the rise of geek culture (The Social Network, Scott Pilgrim vs. the World, It's Kind of a Funny Story, Kick-Ass), this gradual empowerment of the weaker position? While examinations of vengeance and solipsism continue to be tough themes to shake, they've begun taking the form of marginal uplift as opposed to mostly-undiluted nihilism.

2010's best films are marked by a tension between nostalgia and the desire to be free from nostalgia; between being stained ineffably by the atrocities of the past and yearning to be born again, innocent, into a new world. American cinema is in good shape, with singular voices like the Coens', Aronofsky's, Fincher's, and Sofia Coppola's in fine feather even as ticket prices surge and the 3-D fad promises to produce more low points before it fizzles out into that green dot on the digital horizon. Ben Affleck cements his surprise status as a filmmaker of note while Pixar finishes a trilogy with a movie that contemplates mortality in the way Japanese anime has for decades...but still. France rises again with young mavericks like Gaspar Noé and Olivier Assayas, while South Korea maintains its status as the best place for film that largely escapes the popular conversation.

The amount of reality-testing films (Shutter Island, Inception, The Killer Inside Me) this year--an echo of '99 (The Matrix, Fight Club, The Sixth Sense)--could be an indication that we're on the cusp of another cataclysm of faith, or that we haven't entirely embraced the idea that we've crossed back over a threshold into some simulacrum of normalcy again. But I can't shake the notion that we're on the verge of another period of introspection--another American '70s, where distinct auteur voices speak and Terrence Malick's next film inspires as much excitement as, if not more than, the next instalment of some Hollywood behemoth. A few of the films on this list are distinctly inspired by Malick, others are touched by that era's Sidney Lumet and Alan J. Pakula (others still by '70s-era Dario Argento and Eric Rohmer and Roman Polanski)--testament to the power of cinema from that decade that its ripples stretch into another period in which even the worst of what the medium suffers (like Avatar; like Tron: Legacy) are monuments to our past, and hopeful about our future. 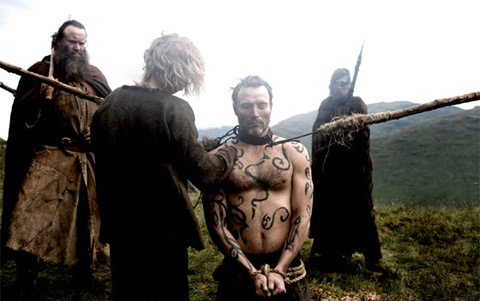 Notably Missed: Enter the Void; Uncle Boonmee Who Can Recall His Past Lives; And Everything is Going Fine; Life During Wartime

25-11:
25. Everyone Else (Alle anderen)
Lukas Moodysson + Ingmar Bergman, but not bad for all that.
24. The Crazies
Smart thriller better than the Romero; also miles better than this year's own Romero.
23. Sweetgrass
Husbandry as poetry.
22. The Ghost Writer
A perfectly-crafted architectural thriller that isn't interesting until, literally, its final shot.
21. Blue Valentine
Harold Pinter set to hip indie misery, but affecting all the same. Cunnilingus.
20. Carlos
Moments of greatness undone to some extent by pacing issues in its last two hours. More cunnilingus.
19. Harry Potter and the Deathly Hallows, Part I
Puberty as lovely war idyll with secret weapons Nick Cave and Alexandre Desplat.
18. I Am Love (Io sono l'amore)
The Tilda Swinton Show marches on to a tick-tock drum with a closing shot for the ages
17. Toy Story 3
Ambitious, mordant, courageous climax and epilogue bolster a lacklustre first act.
16. A Prophet (Un prophète)
The best Nicolas Windig Refn film that Tom Tykwer used to make. Good razor violence.
15. Amer
An Argento highlight reel married to Antonioni. Again good razor violence.
14. The Town
Rock-solid if not quite transcendent, '70s-era Lumet crime/character study, rich in story of place.
13. The Social Network
Verbal emoticon avatar for the Year of the Dork.
12. Kick-Ass
Physical emoticon for the same and best John Woo shrine of the year.
11. Around a Small Mountain (36 vues du Pic Saint Loup)
Offers an epilogue to a career, with circus performers at metaphysical play in the land of the post-modern that Jacques Rivette, of all the French masters, handles with the most grace.

(It should be mentioned that the just-awesome The Good the Bad the Weird previously made an appearance on an amended 2008 list I wrote for our blog a while back when it was unclear that it would ever get a U.S. release. Still in limbo is the same director's excellent A Bittersweet Life. What a blessing region-free DVD players are.)

10. The American (d. Anton Corbijn)
Jean-Pierre Melville by way of George Clooney, who, whatever the crimes of his early career and the Ocean's flicks, has provided for us genuinely reverent, smart genre flicks like this and Solaris that pay tribute to guys like Melville and Tarkovsky. A cold-war thriller banking on sex and mute menace like The Ipcress File and Eye of the Needle, The American is a mature film for adult audiences in its reduction of sex and murder-for-hire to the same masculine creative instinct. "Mr. Butterfly" (M. Butterfly?) is a craftsman--an identity and an attitude he carries into every aspect of his life. When he enters into an agreement with another professional--hooker Clara (Violante Placido)--to set aside the masks that make them ciphers passing through real people's lives, he becomes vulnerable to the consequences of existence. It's at once a brilliant subversion of genre and a brilliant honouring of the same--and proof, like Solaris, that the best films of most years are often misunderstood in their time. Cunnilingus.

9. Marwencol (d. Jeff Malmberg)
Synecdoche, New York as proof of a certain therapeutic strategy, Marwencol follows the recovery of photographer Mark Hogancamp, who, after receiving a vicious beating for a drunken confession in a backwater drinking hole, begins to create a miniature WWII world using toys bought at the local hobby shop, complete with avatars for all his friends and acquaintances. Director Jeff Malmberg documents Hogancamp's re-enactment of his tragedy, his Burroughs-like fantasies of an alternate reality offering alternate futures, and finally how his miniature representation has itself begun to construct a miniature reality. It sees the inward construction of memory as the palimpsest articulated by Thomas De Quincey over two hundred years ago and discovers that the outward manifestation of grief can begin to look the same. Astonishing.

8. Dogtooth (d. Yorgos Lanthimos)
Deadpan, despairing, bleak, Yorgos Lanthimos's film is a Beckett-esque Theatre of the Absurd piece heavy with serpentine wordplay and considerations of the nature of parental power at war with the corrupting nature of popular culture. It raises a multitude of questions--the big ones--but it presents them more as touchpoints than as speaking points, wholly to its credit. Violence and sexuality are shown as opposite sides of the same human coin while a few sequences (an after-dinner dance, an uncomfortable deflowering, the price of a final escape) are transcendent in their ability to discomfit for profit. "Courage" is a word generally reserved for starlets agreeing to get naked or men agreeing to kiss other men onscreen, yet Dogtooth fascinates because it is in part a discussion of why it is we think that kind of thing is brave. Also: cunnilingus.

7. Greenberg (d. Noah Baumbach)
An attack against pretension that could at first be taken as the height of pretension, Noah Baumbach's film is a filmmaker hitting his stride as he continues to discuss the peculiarities of his upbringing and the meaning of suffering even in rarefied air. Emotionally intelligent and packed with moments that flower in memory, it's a conversation at its heart about self-worth and the nature of the disguises we wear to meet the world. A perfect companion piece to his Margot at the Wedding, it's Baumbach at his most confident in a picture that grows huge in the rear-view. Cunnilingus.

6. Mother (Madeo) (d. Bong Joon-ho)
Bong Joon-ho's film about family fidelity presents the performance of the year in the great Kim Hye-ja as an over-protective mother of a simpleton son who's late been accused of murdering the town pump. Her tireless sleuthing on his behalf resembles a holy war waged in an unholy land, and a climactic scene in which she visits another suspect in the case is the most harrowing, and heartbreaking, of the year. Bong has a gift for balancing farce with pathos; this is his best film since his first, Barking Dogs Never Bite, though I like them all.

5. Animal Kingdom (d. David Michôd)
Another ferocious mother anchors Australia's tremendous crime drama Animal Kingdom as young Josh Cody (James Frecheville) is placed on the horns of a dilemma when presented with a choice of a life of crime or a shallow grave by the demonic Pope (Ben Mendelsohn). The resolution isn't as important as the quiet moments of discovery as Josh learns of loss and loyalty and comes to an altogether unexpected conclusion about the direction for his life. With a visual style part Malick, part Michael Mann, newcomer Michôd's best trait is his unusual patience and extreme comfort with quiet.

2. True Grit (ds. Joel & Ethan Coen)
A near-perfect adaptation of Charles Portis's prose--not just the book that it's based on but as a whole; I look at True Grit as a Rosetta stone of sorts for deciphering the Coens' true genius as literary interpreters. The performances are perfect, the craft is perfect, the film, in many ways, is perfect. Completely enjoyable, but it's the echoes that truly compel--the sense that there's a lot more on the film's mind than a good yarn told well in the classical style. And those last fifteen minutes are maybe the best fifteen minutes of 2010.

1. Valhalla Rising (d. Nicolas Winding Refn)
Minimal one word for it, "magnificent" a better one. Refn takes the Tom Tykwer wunderkind crown for last year's bombastic Bronson and this, something completely different, a remarkable bit of Terrence Malick-infused naturalism-as-history-of-man. Mads Mikkelson exudes Toshiro Mifune's warrior masculinity in a tale of essential spirituality distilled to its animal, manic motions. A new myth for the New World, as well as an excoriation of clothing animals in robes of religion, it's the only film of 2010 I've watched more than twice. I've… watched it five times, in fact, and still haven't had my fill.