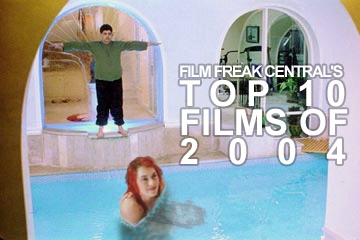 January 1, 2005|There's a wonderful, haunted Dan Simmons short story called "The River Styx Runs Upstream" in which technology has made the resurrection of beloved family members possible, though the resurrected are barely recognizable as human. It's an iteration of the W.W. Jacobs story "The Monkey's Paw", of course, a fictionalized platitude of watching what you wish for, and the tale's melancholic tone--its themes of surfacing and being unable to let go of the past--colour the best films of 2004.

This was a year that saw no fewer than fourteen major films about memory; saw a snuff film about a zombie hippie renew some people's faith in a religion that has been perverted in the popular conversation into an instrument of hate, exclusion, and justification for war (caution: wars in Bibles are called "Gehenna" and "Ragnorak" and "The Apocalypse"); saw a quartet of films beginning with the unearthing of a long-buried secret; saw a trio of pictures dealing directly with reincarnation; and welcomed back the disaster genre in theatres and on television to provide the literal version of bulldozing the past and starting over fresh. Zeitgeist isn't the exclusive purview of critics or the arthouse ghetto anymore.

2004 was also obsessed with children: the value of them, the purity of them, the horror of them, and, above everything else, the need for them to have strong parental figures so that they're appreciated, cherished, and feared. There were more films for adults about children in 2004 than at any time since the Reagan-fuelled fantasia of the mid-'80s. Does Bush Jr.'s pulverizing need to be equated with Cowboy Reagan have a basis in consequence? Yes, it does. A lack of leadership, or a divisive one, yields strange fruit. What is Harry Potter 3 but the story of a boy, orphaned violently, beginning to manifest disturbance in his adolescence? And what is Spider-Man 2 but the story of a boy, orphaned violently by his inaction, seeking father figures in inappropriate men he must subsequently murder? Grace notes and hammer blows: auteurs--John Sayles, Zhang Yimou, Alexander Payne, Wes Anderson, Sam Raimi, Lars von Trier, Takeshi Kitano, Mike Leigh, Bruno Dumont, Clint Eastwood, Michael Mann, Michael Winterbottom, Michael Haneke, David Gordon Green, Jim Jarmusch, Tian Zhuangzhuang, Pedro Almodóvar, Oliver Stone, M. Night Shyamalan, Steven Spielberg--returned in force with new films, but only a handful of major artists (Mamoru Oshii, Quentin Tarantino, Charlie Kaufman, Martin Scorsese) produced works that were indelible instead of competent-then-ephemeral. It was a loaded year and an unusually (ironically) memorable one for the quality of the films and for how closely so many of them hew to the year's dominant themes.

The river Styx flowed upstream in the cinema of 2004, bringing with it the seething ugliness of our recent past and, perhaps, the realization that there are certain moments in our history that brand us, that mark us indelibly with the kind of desperate sadness only experience can bring, no matter how desperate we are to forget.-Walter Chaw

Notably Missed: Son frère, When Will I Be Loved, Les Choristes, Moolaadé

10. Before Sunset (d. Richard Linklater)
Reminiscing, remembrance, and reunions: a new 'three "R"s' buoys Linklater's Before Sunset after his populist School of Rock to among the best in a year that saw a batch of excellent sequels (with a trio of "#2s" in the top ten). The follow-up to Linklater's countercultural yak-classic Before Sunrise finds Ethan Hawke and Julie Delpy, aged appropriately and essentially playing themselves, discussing world politics, sexual desire, regret, and the slipperiness of time. It forms a bookend with the top slot on this list of hopelessly romantic pictures built on a slick foundation of perception and words, which, no matter the confusion, always ring unerringly true.

9. The Aviator (d. Martin Scorsese)
The depth of The Aviator is the sort of thing borne of a master filmmaker at the top of his game, one equipped with a frank level of insight into his own regrets and weaknesses. Scorsese has reached a point where he's armed with the technical proficiency to express his disappointments through his art, and the result is a scary movie that cleaves close to the bone while outwardly exhibiting the snake-oil charm of a professional salesman. A movie about obsession made by an obsessive and about an outsider made by a professional one of those, too, it's Scorsese's Spruce Goose--but it flies like a dream.

8. Spring, Summer, Fall, Winter...and Spring (d. Kim Ki-duk)/A Tale of Two Sisters (Janghwa, Hongryeon) (d. Kim Ji-woon)
Lush paintings and complementary contemplations of how we're embedded into the world as spiritual beings, Kim Ki-duk's portrait of the cruel, beautiful logic of the cycle of living sees life as a perfect circle of innocence to experience to innocence. Find in Spring, Summer, Fall, Winter...and Spring a capsule of 2004's obsession with loss and recovery--of the self and of the many lies and injuries that constitute the self. Meanwhile, Kim Ji-Woon's amazingly sensuous A Tale of Two Sisters does all that and adds a ghost story of innocence haunting experience: the child troubling the adult she'll become.

7. Ghost in the Shell 2: Innocence (d. Mamoru Oshii)/The Incredibles (d. Brad Bird)
The two most notable animated films of 2004 both deal with the daunting weight of growing from the blitheness of childhood into the responsibility of being human--they suggest that it's a lack of self-knowledge that is the most dangerous thing for holy innocents, whether they are conceived in a mainframe or in the flesh. Just the way that the films themselves are animated adds another layer of complexity to the drawing of that protean line between the product of the hand versus the product of the machineries of man.

6. The Return (Vozvrashcheniye) (d. Andrei Zvyagintsev)/Mean Creek (d. Jacob Aaron Estes)
Terrence Malick casts a long shadow on this generation's filmmakers. Add to the list of his acolytes Andrei Zvyagintsev and Jacob Aaron Estes, chiming in with films poised, again, on the twilit precipice between a Blake-ian innocence and experience. Each takes a different tactic than the aforementioned picks, though, by weaving poetry from the trauma of rebirth into the world. The Return and Mean Creek are delicate haikus to the inevitable and brutal insistence of knowledge; prayers to broken stones, indeed, their view of the world sees it as a wasteland, but a beautiful one that's worth saving.

5. Kill Bill, Vol. 2 (d. Quentin Tarantino)
An astonishingly graceful piece on the sanctity of motherhood, Quentin Tarantino's conclusion to his Kill Bill epic has as its hero that rarest of western beasts: the feminine action heroine, willing to twice turn her back on everything she knows and loves for the hope of having a child. Tarantino's knowledge and skill (he's the only real pretender to Scorsese's crown) crafts a piece that comments somehow on the joy of film as intimate and transformative, and that speaks to issues of rebirth, memory, and progeny. Too easy to dismiss, Tarantino remains the true fana.

4. Birth (d. Jonathan Glazer)
The promise of Sexy Beast, Glazer's debut, is fulfilled in Birth, a picture that plays entirely like the dream sequences of the director's first film while approximating the work of Carl Theodor Dreyer. Stately and courageous, it deals with the mysteries of memory as they're coloured by grief and love. The ubiquitous Nicole Kidman finds, between this and Dogville, two examples of why she's more than just a lovely face--case in point, a scene in Birth where Glazer and my new favourite cinematographer Harris Savides just hold on Kidman, in close-up, as she arrives at a silent epiphany.

3. Last Life in the Universe (d. Pen-Ek Ratanaruang)
Japanese superstar Tadanobu Asano and Thai beauty Sinitta Boonyasak are the entropic couple at the centre of this swiftly tilting piece by young turk Ratanaruang. He's a suicidal obsessive-compulsive, she's a woman who recently lost her sister and her boyfriend; together they spend an idyllic season in languid orbit around one another as Yakuza hitmen, cruel fate, and bitter irony weave themselves into the tapestry of existence. It's an apocalyptic romance, a companion piece for Lost in Translation, Gus Van Sant's Elephant, and the oeuvres of Wong Kar Wai and Hou Hsiao-hsien that offers a devastating glimpse at loneliness, despair, and love.

2. Crimson Gold (Talaye sorkh) (d. Jafar Panahi)
Working from a script by Abbas Kiarostami, Jafar Panahi's wondrous Crimson Gold has been compared, like so many films, to Taxi Driver, but it might be the first to actually deserve the comparison. There's a remarkable sadness about non-professional star Hussein Emadeddin as he struggles with the madness and class division of modern-day Tehran, lumbering through the lunatic metropolis with half-lidded disbelief. A diary of the toll of conflict and division on the disenfranchised, Crimson Gold, a missive from W.'s Axis of Evil, speaks more for the silenced margins than all the Massachusetts senators in the world.

1. Eternal Sunshine of the Spotless Mind (d. Michel Gondry)
The most hopelessly romantic film in ages, Charlie Kaufman's Eternal Sunshine of the Spotless Mind is the writer's The Royal Tenenbaums: a picture that finds that crystalline balance between the intellectual, the incisive, and the emotional with an astounding level of complexity and verve. At once a time-travel film and a memory-manipulation piece, it transcends its medium to encroach on poetry and art and music. Sticky, passionate--"I'll meet you at Montauk" and Huckleberry Hound are already shiver-inducers for anyone who's seen Eternal Sunshine of the Spotless Mind. (And how's that for post-modern?) It's the best film of 2004, sophisticated and delirious--and in a cruel twist that Kaufman could appreciate, all but forgotten in the avalanche of end-of-year Oscar-baiting weepers.